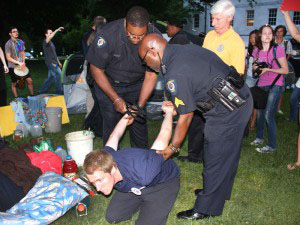 Students at Emory University were arrested after sitting in to demand termination of the school’s contract with food service giant Sodexo, exposed for human rights abuses globally.

When it comes to budget cuts and policies that hurt students and campus workers, student activists are refusing to sit down…unless it’s in their president’s office. This week and last, students at five universities staged sit-ins for student and worker rights, and this seems to be only the beginning.

For the past few years students across the country in United Students Against Sweatshops (USAS) have been running campaigns against budget cuts and salary freezes that hurt students and already underpaid workers. This spring that work has blown up. Students in USAS launched a national “Take Back Our Economy” project and mobilized in more than 30 cities March 2 and April 4 in support of workers’ rights.

Using Skype, the Emory activists teleconferenced with USASers at Virginia’s College of William and Mary, live from their own sit-in in the president’s office, where students sought resolution to a 10-year campaign by campus workers for living wages.

The William and Mary group was arrested after midnight, while Emory’s sit-in escalated into a sprawling “tent city” outside the administration building until Emory arrested seven students April 27.

In New Orleans, 21 students at Tulane University took over the president’s office (watch video), singing and chanting to demand that the school kick out Sodexo and protect campus workers’ rights. They left three hours later after administrators threatened discipline and brought in police.

April 26 the action came back to Madison, where 70 students occupied the office of University of Wisconsin Chancellor Biddy Martin to protest her promotion of a privatization scheme that would lead to skyrocketing tuition and outsourcing of good union jobs on campus.

Students are angry about universities and local governments implementing cuts and policies that hurt working people and students while they continue to invest in new construction projects and enormous salaries for administrators.

At William and Mary, the living wage campaign is part of a broader movement towards schools, workplaces, and an economy that works for us. Students are challenging policies that force campus workers to live in poverty and make education increasingly unaffordable. More information about the sit-in and arrest at William and Mary is here. Read about living wages and the history of the campaign here or email livingwages [dot] wm [at] gmail [dot] com.

Related
How Student Workers at Grinnell College Are Winning a Wall-to-Wall Union »
HELU: A National Strategy for Higher Ed Labor »
Teachers Strike against a ‘Heartless’ School Board in Biden’s Hometown »
School and Campus Workers Say: Not Until It's Safe »
Graduate Employees at University of Michigan Strike over COVID, Police »