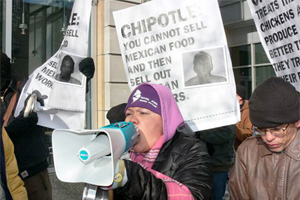 Related
Work Is the Reason Latinos Are Getting Slammed So Hard by the Pandemic »
Pandemic Spurs Nashville Restaurant Workers to Organize »
Chicago Health Care Workers on Strike for Safe Staffing, $15 Minimum, PPE »
Why and How SEIU Members Are Calling on Our Union to Expel Cops »
Corona Capitalism in Honduras »