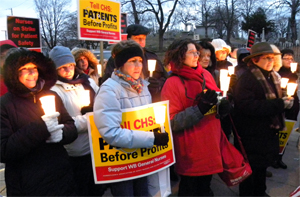 The nurses at Wilkes-Barre General Hospital in Pennsylvania chose a one-day strike to protest glacial bargaining, staffing concerns, and management's proposal for expensive health benefits that could change at a moment's notice. Photo: Emily Randle, PASNAP.

With patience wearing thin after 18 months of bargaining, the nurses at Wilkes-Barre General Hospital in Pennsylvania chose a one-day strike December 23. We wanted to show our for-profit employer that our solidarity is still as strong as ever and that we will stand up and fight for serious bargaining.

More than 400 nurses from the Wyoming Valley Nurses Association, a local of the PASNAP hospital union, staged the strike in protest of unfair labor practices and bad-faith bargaining by Community Health Systems. Tennessee-based CHS purchased our hospital in May 2009, and still has yet to offer contract proposals that the nurses can live with. Our expectation from bargaining was a contract equitable to the one we had when ownership of the hospital changed.

But in bargaining sessions, the CHS representatives would not even come into the same room as the nurses. They would communicate with us solely via a mediator. They’ve withheld crucial information. They’ve displayed a total lack of respect toward workers, both inside and outside of the hospital. One union leader, fired in 2009, won his job back in an arbitrator’s ruling last June but still isn’t back on the job, as the company pursues frivolous appeals.

There are three major points of contention in the contract.

Safe nurse-to-patient staffing ratios. CHS does not want to commit to any staffing ratios, which means that at any given time, a nurse who should only be taking care of four patients can be assigned 10 patients. This is dangerous for the patients, and an inexcusable attempt by CHS to put profits before people.

CHS wants language in the contract allowing them to unilaterally change benefits during the duration of the contract. (Well, what’s the point in having a contract then?)

CHS offers a health care plan that under-insures the individual or family, offering limited coverage and substantial co-pays, deductibles, and coinsurance. This unaffordable plan has already been forced on the non-union employees at the hospital, some of whom have acquired thousands of dollars in health care debt already, even when they are treated in the same hospital in which they work.

The nurses’ solidarity has moved management off of their cookie-cutter CHS plan, but the plan now on the table is very expensive and could still bankrupt some of us if we were to get ill.

We had to strike to counter the disrespect CHS is showing us, our patients, and our community. We knew that a one-day strike would not bring the company to its knees. With 126 hospitals in its control, CHS is the largest publicly traded hospital company in the country. If it acquires the 49-hospital Tenet health care corporation as it plans to, CHS will be the biggest hospital company nationwide.

Our one-day strike was just one tactic in our comprehensive campaign. Even a one-day strike raises awareness and gets the public’s attention. Plus, someone has to stand up when CHS breaks the law! So we took to the streets.

The day began at 7 a.m. with a large group of nurses in front of the hospital welcoming our night-shift co-workers as they left the building. Nurses picketed with their families, community supporters, and representatives from other union locals. It was a fine showing of solidarity. Picket signs showed pictures of top CHS executives and their eight-digit salaries.

A rally at noon featured speakers from the community, sister locals of PASNAP, and local and state government, and brought an overwhelming show of support from the community and government representatives. Ninety percent of the hospital’s nurses participated throughout the day.

We concluded the day with a candlelight vigil to reflect on why we fight so hard for our profession. We have a responsibility to our patients and their families. They place immediate trust in us to provide the best care for them, to meet their physical and emotional needs, and to advocate for them. Although the administrators have us dealing with more and more paperwork, computer data entry, and checklists for billing, the compassion and caring provided by the nurse is priceless.

When many of us were asked how we tolerated the frigid temperatures and biting wind throughout the strike day, we simply responded, “We work in worse conditions every day,” and continued picketing.

Though we know that CHS felt our absence, management is pretending like the strike didn’t happen and have not scheduled any further dates for bargaining. Further action may be necessary, and we nurses are currently discussing the next steps we’ll take on the long road to justice.

Elaine Weale, an RN at Wilkes-Barre General Hospital, has been an acute care nurse for 31 years.

Related
VIDEO: Health Care Strikes During a Pandemic »
In a Six-Day Strike, Bronx Produce Workers Doubled Their Raise and Inspired New York »
Will Urgent Care Doctors Be Forced to Strike in a Pandemic for the Right to Go Home? »
Understaffed and Unsafe, Bay Area Hospital Workers Strike »
On Medicare for All: Fight for What We Want, Not What We Think We Can Get »