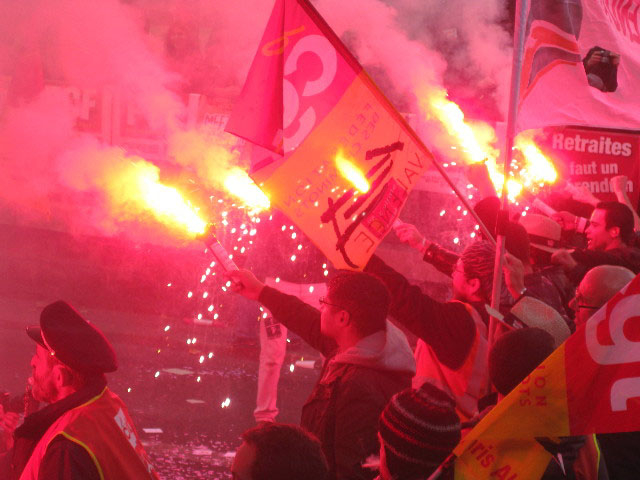 Rolling strikes at oil refineries, railroads, and ports in the country’s south have taken a bite out of transport links and caused fuel shortages in some regions. Protests regularly block access to bus depots, airports, intersections, and more.

The bill will move the age of minimum retirement from 60 to 62 and the age for a full pension from 65 to 67. While the government and big employers insist that workers must work longer in order to keep the public pension fund solvent, unions and grassroots organizations have made it clear that other solutions are possible.

Creating jobs for the millions who want work but can’t find it would simultaneously increase annual contributions to the pension fund and free up money currently spent on unemployment insurance. Removing billions of dollars of tax exemptions granted to employers would also reduce the pension deficit.

Hiking the retirement age is highly unpopular. As millions have marched in the streets, public support for the movement has remained extremely high. Today, two-thirds of the French population supports the strikes and protests.

Sarkozy hasn’t let popular outrage slow him down, though. He and his team pushed the bill quickly through the lower house and the Senate, hoping to pass as many hurdles as possible before the movement picked up speed. The only step remaining now is for Sarkozy to sign the bill into law.

This means the movement is now in a critical stage. The cutbacks can still be turned back, but only if unions turn up the heat considerably.

Mainstream media pundits are already predicting the movement’s decline, but these reports are exaggerated. Activists say there are contradictory signs.

On the one hand, dynamic protests are breathing life into the movement. Truckers continue to engage in “snail actions,” slowing traffic on major highways to a crawl. Belgian workers blocked access to an oil depot that was being used to fill French gas stations. Large contingents chanted “General strike! General strike!” at the October 28 protests.

On the other hand, there are worrying trends. Workers at three of France’s 12 oil refineries voted to return to work, weakening the movement’s blockade of gasoline. Student participation has declined over the past week. Turnout at yesterday's national protest was lower than in previous actions.

While all the major unions continue to endorse national protests, the country’s second largest union federation, the conservative CFDT, has signaled its desire to abandon protests in favor of dialogue with employers over job opportunities for youth and seniors. This comes as little surprise to many French activists, but it nonetheless represents the first major crack in the multi-union coalition opposing Sarkozy’s plan.

How the movement evolves between now and the next national day of action planned for November 6 will depend on the direction taken by the country’s largest union federation, the CGT. Battles have been brewing inside the federation as energized rank-and-file activists push for bolder opposition, while the national leadership continues to be cautious.

With the CFDT’s likely departure from the scene, two possibilities arise. The CGT’s conservative leadership might follow the CFDT’s lead, arguing that the scheme is a done deal. Faced with the departure of the country’s two major unions, the movement would likely peter out.

Alternatively, rank-and-file CGT activists might succeed in pushing the national leadership to link arms with smaller, more militant unions in an effort to intensify and expand strikes. Activists can draw hope from the 1995 battle against pension changes, when a smaller coalition of militant unions led by the CGT generated enough street heat to halt cutbacks.

Jason Stanley is in France researching cutbacks to government benefits.

Related
This Year I’m Thankful for the Revolt Against Two-Tier »
'We'll Never Be in This Position Again': Striking Deere Workers Hold Out for Better Deal »
Teachers Strike against a ‘Heartless’ School Board in Biden’s Hometown »
Viewpoint: Building Trade Unions Won’t Win Our Parking Fights Until We Catch the Striketober Spirit »
‘It Feels Like We Started a Movement’: Despite Mixed Results in Frito-Lay Strike, Workers Proud They Stood Up »