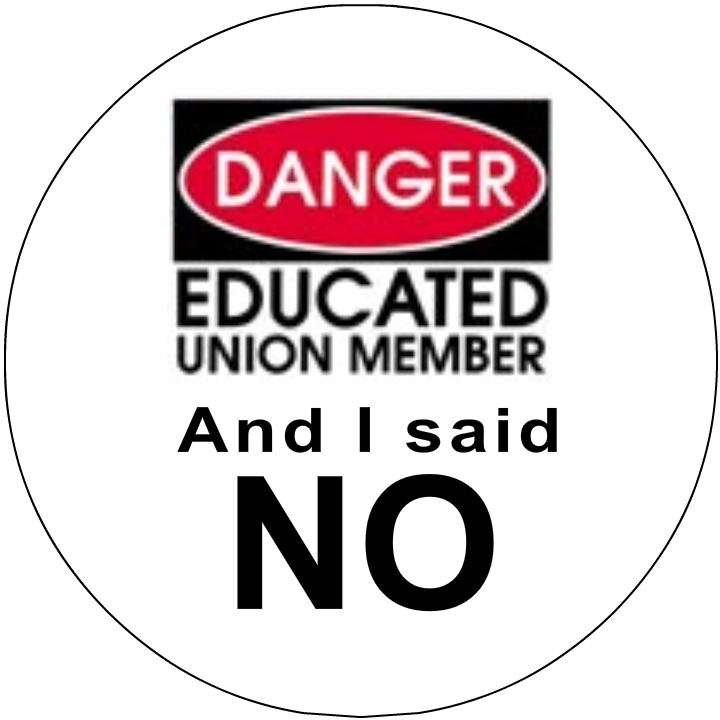 UAW members at GM's Indianapolis stamping plant are wearing buttons like this one, to tell management to respect their vote not to reopen their contract for a pay cut.

What part of “NO” doesn’t Justin Norman understand?

The CEO of JD Norman Industries, which makes metal components, placed a full-page ad in the Indianapolis Star two days after GM workers booed his buddies off the stage. They wanted no part of Norman’s offer to buy the Indianapolis Metal Fab plant GM has slated to close. But Norman is desperate to buy the plant—if workers will cut their wages in half.

Norman called for a meeting in a local stadium last Sunday—but only 50-60 workers and their family members showed up, out of a workforce of 630. He offered lump-sum payments of $25,000-$35,000 over a two-year period for those willing to work at $15.50 per hour (with almost all contract rules over working conditions eliminated, replaced by “management rights”). But a six-year-old company with little expertise in the auto industry doesn’t offer much security.

As members left the meeting some told reporters that they had listened but Norman had nothing to offer. UAW Local 23 shop chair Greg Clark, who has led the fight against wage cuts, filed a complaint against Norman with the National Labor Relations Board, saying he had tried to circumvent the union.

The members of United Auto Workers Local 23 had already voted 384-22 not to reopen their contract, back in May. They knew that its successor clause means that any company buying a closed plant has to honor the GM-UAW contract. The majority of members have worked for GM for years, earning a good wage and decent health care and pensions. Many are GM “gypsies” who have been forced to relocate from plant to plant as shutdowns spread like dominoes. A shutdown in Indianapolis would mean one more transfer, a sacrifice they prefer to a gutted contract. Now they're wearing buttons with messages like "Danger! Educated Union Member, and I Said No," "I Have a Contract," and "No Means No!"

Norman needs a yes vote in order to buy the plant and void the successor clause. Not only does he need workers’ skill in operating the plant, he doesn't want to run the plant non-union because the contract prohibits GM from outsourcing the work to a non-union business. He needs a union contract—no matter how substandard—in order to sell his stampings to GM. It’s not just the physical plant Norman needs, but the business and its workers.

To persuade the workers, Norman’s ad pleads with them to consider all their “options”—they can transfer to another GM facility, they can retire, or they can work at half price. The ad attempts to break the solidarity the local has built by saying the company has an option for each individual.

But Local 23 members know that by putting their stamp of approval on an inferior contract, they have given up the power within their contract. The product JD Norman would churn out with cheap labor would undercut GM’s other Metal Fab facilities. It would take work away from other stamping plants and soon establish a new “normal” wage for stamping plant workers—undermining the union as well as their own transfer rights.

Justin Norman has made it clear he is not giving up. With GM backing him up by not processing transfers, UAW regional officials pushing Norman’s plan, and national union officers silent, UAW Local 23 members need solidarity in their fight against low-wage jobs.

Solidarity from Other Plants

At the UAW’s August 28 march for Jobs, Peace and Justice in Detroit, a leaflet sponsored by a number of dissident groupings inside the union was handed out. They called for solidarity and pointed out, “[The Local 23 members] know if they give in, it will just be a matter of time before other UAW-GM Metal Fab workers face the same fate.”

Greg Clark describes feelings inside the stamping plant as “tense,” with managers—who will lose their job if the plant closes—openly agitating for a sale to Norman. While Clark was out of town last week, he said, “management called a meeting to intimidate people—they were going to move the dies out. Later that afternoon, someone started passing out flyers for JD Norman saying there would be a meeting on Sunday.”

Clark also filed internal UAW charges against regional officials, for negotiating concessions after members had voted not to, but the UAW International told him the charge was “premature” because the situation remains unresolved. Clark has heard nothing from UAW President Bob King.

Supporters in other plants are now seeking UAW members’ signatures for a solidarity letter to Local 23. “Is JD Norman saying he and his managers will take a 50% cut in pay if they buy the plant?” they ask. “If you stand strong, it will help everyone.”

Related
UFCW Reformers Look to 2023 »
Ballots Are Out in UAW Election, with Contrasting Visions of Unionism Up for Leadership »
Rank-and-File Power Is Essential to Rebuilding the Labor Movement »
Auto Workers Turn a Corner for Strike Pay and Democracy »
UAW Delegates Head to Convention and Prepare for First Direct Elections »

Whose side is Bob King on?
What does he want to do: increase membership with $15.00 jobs and show the big three
he is willing to accept jobs for minimum wages.

If Goverment Motors needs the parts from this stamping plant let them keep it open
and make IN-HOUSE PARTS.

This is a great blog entry! We will send it to our UAW Local 600 email list. --Ron Lare, Judy Wraight