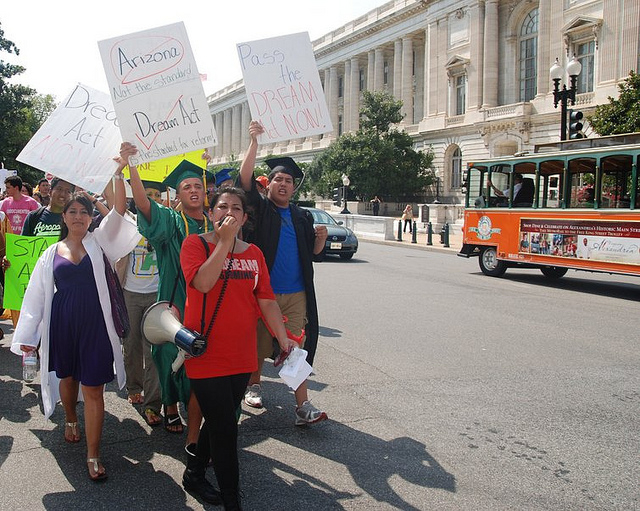 Undocumented youth and students rally for the Dream Act outside the Senate building Tuesday. Photo: Leadership Conference on Civil and Human Rights.

Twenty-two undocumented students risked deportation at the nation’s Capitol yesterday, staging sit-ins in the offices of five senators. After leaving the offices the group unfurled a banner in the Senate building—considered a felony—and held a second sit-in in the atrium. All were arrested by the time the building closed in the evening.

The young people donned graduation caps and gowns to demand passage of the Dream Act, a piece of legislation that has been in the pipeline for nearly 10 years. The bill would grant citizenship to undocumented young people who grow up in the United States and go to college or into the military.

The 22 students are certainly bright and undeniably American (one sit-in striker explains her childhood love of the “Fresh Prince” and *NSYNC to prove the point). None have papers for citizenship but many have college degrees—and some are PhD candidates, too.

The students came to D.C. hoping their stunt would lead to arrest and would force high-profile deportation hearings. Their aim is to put more pressure on allies in Congress who’ve promised to support the Dream Act but have waffled as the chances for immigration reform have waned across the country.

When Labor Notes spoke to sit-in participant Nicolas Gonzalez of Chicago’s Immigrant Youth Justice League, he was waiting to get into a court hearing for four strikers who were charged with unlawful entry after their sit-in at Senator John McCain’s office.

One of the strikers is Tania Unzueta, who also sat in at McCain’s office in Tucson, Arizona, in May, demanding he co-sponsor the bill. McCain once supported an earlier version of the legislation, but noticeably missed the 2007 vote when it was eight votes shy of becoming law.

Unzueta’s been in the U.S. since she was 10 and is part of an activist family—father Martin organizes immigrant workers with the Chicago Community and Workers Rights Center (you might have met him at the 2010 Labor Notes Conference as part of a contingent spreading the word about the brand-new anti-immigrant SB1070 law in Arizona).

The students in D.C. are part of a national network of undocumented youth and students who’re approaching the constant stall-outs of the Dream Act with civil disobedience. They’re also among the thousands of people expected to descend on Arizona next week when the state puts the SB1070 law into force, barring legal challenge.

Gonzalez reports that students stood their ground in Senate Majority Leader Harry Reid’s office when staffers said their actions were counterproductive. Gonzalez said their high-profile friends tried to convince them not to do the action, saying, “We’ll do it [win the legislation] for you, you don’t have to put yourself in danger.”

“We’ve been waiting for 10 years to pass the Dream Act and every year we hear the same thing from senators who tell us to hold off, they’ll take care of it. At the end of the day nothing happens,” Gonzalez said.

Press conferences and vigils—some at senators’ home offices—are being held in Texas, New York, Florida, Virginia, and Illinois. AFL-CIO President Richard Trumka offered his support of the act earlier this year, but outside of a big caravan traveling to Arizona from LA’s Labor Federation next week, it’s hard to see where labor is mobilizing members in support of immigrants’ rights.

The Dream activists spent the day hoping to hear news about the four students who remained in custody until late this afternoon. They vowed to press on, and take their fight into court, where they hope their bold action will pressure Democrats to pass the act.

“We’re telling them we’re no longer working with their agenda, because nothing is happening,” Gonzalez said. “We are undocumented, we are unafraid, and we are putting our freedom on the line.”