'Toxic' Health Bill or No, Labor's 'Medicare for All' Activists Dig In 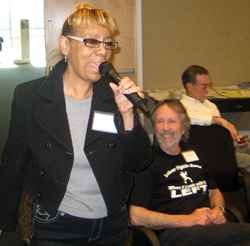 When I told friends I was on my way to the Labor Campaign for Single-Payer conference, held last weekend, they all said, “I bet that’ll be a bunch of long faces.” I predicted not—these were people who’d always known the health care reform debate in Congress would come up short.

Even single-payer advocates didn’t know just how bad the bills would be, of course, but we knew that when the dust settled the insurance companies would still be in charge. “We’re making progress on single payer—the corporations want to make you the single payer,” said Chris Townsend, UE political director.

Yet the 124 delegates to the March 5-7 conference in Washington were upbeat. Despite the seemingly imminent passage of what campaign coordinator Mark Dudzic called a “bound-to-fail, toxic” proposal, they could point to big strides in popularizing the idea of Medicare for All:

Participants wasted no time moaning about the fact that most of their union leaders ignored single payer and set their sights on a public option that was presumed more viable. Instead they talked about how to pass state-level bills and shared specific tactics.

They saw a costing chart that the Maine AFL-CIO uses as a teaching tool to illustrate the huge cost savings of single-payer. They heard about the California School Employees Association’s member-to-member education program and about the plan to put a single-payer measure before California voters in 2012.

And they passed a resolution to pursue more resolutions: they will follow the lead of the Maine AFL-CIO in calling on the national AFL-CIO to take up the single-payer crusade with a commitment of resources no less than the resources devoted to this year’s frustrated effort.

The Maine federation noted, “Had we collectively pursued such a strategy after the last healthcare policy failure in Congress in the mid 1990s—by staking out a strong single payer position, educating our membership as deeply as possible, pushing for political support of single payer legislation and sticking with that approach for the last fifteen years—we would be in a much stronger position today.”

Although the activists are looking long-term, they’re not planning to wait, either. Kay Tillow of the All-Unions Committee for Single-Payer warned folks, “Don’t say ‘it’ll be 10 years before we can look at health care again.’” Michael Lighty, policy director for the California Nurses Association, was one of several who spoke of the need to “win the argument over the role of government.”

The most oft-quoted speaker at the conference was Dr. Margaret Flowers of Physicians for a National Health Program, who told delegates to work “outside their comfort zones” to build a movement independent of either party. “Politicians will come to us if we build a strong enough movement,” Flowers said. “We are the ones who determine political feasibility.”

We need to help the American people make a paradigm shift regarding the "Health Insurance companies" Since they produce no real product or service they do not deserve a profit, let alone subsidies and government mandates to buy into their scams. They only serve to limit people's choice of medical providers. They make money by denying care. And they waste billions of dollars by creating unnecessary bureaucracy.

I sure hope Labor will be in this for the long haul. It sure won't be corporations. But we can make it happen. This is about the little guy, the least among us. They need our help and we'll be doing ourselves a huge favor at the same time. Everyone will win.