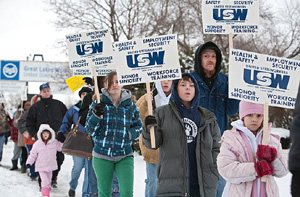 Laid-off electrician Everett Branstator took advantage of a snow day to bring four of his five children to the march. Fifteen-year-old Miranda Branstator said she wanted to “show everyone how many people it affects.” Photo: Jim West.

Ask a union member what’s the bedrock of a union contract, and most will answer “seniority.” Long established as the way to keep the manager’s brother-in-law from getting the good jobs, companies have learned to live with taking turns and following recall lists.

But not U.S. Steel. At its Great Lakes Works south of Detroit, the company came off a nine-month shutdown last summer picking and choosing who it wanted to work in the mill. Some workers with more than 35 years’ seniority are still on the street while some with less than three years are inside. Asked what reason management gave for not calling her back, 31-year member Doriscine Wesley said, “Low seniority.”

Rank and filers called for action, resulting in a 200-person picket line outside company HQ Wednesday. A Steelworkers Local 1299 leaflet decried management’s “wholesale indifference” to parts of the contract:

Local 1299 President Marc Barragan announced that Great Lakes turned a small profit in January—by “doing as much or more with fewer workers.” Many workers on the job are working seven 12-hour shifts a week, or longer. “Every day we read about an economic recovery with the exception of the unemployment rate,” Barragan told the crowd. “US Steel and other companies are resuming operations but without the numbers of workers.”

Added a machinist, “They’re making a profit because they’re working them to death in there.”

Some workers brought their children to the march, which was accompanied by continuous honking from passing motorists in the blue-collar town of River Rouge. Fifteen-year-old Miranda Branstator, one of five children of laid-off electrician Everett Branstator, took advantage of a snow day to “show everyone how many people it affects.”

Twelve-year electrician Dave Erskine, now on his second unemployment extension after 14 months off, said, “This is the first time I’ve had to stand up for anything in my life.” Asked why US Steel—signatory to one of the oldest labor contracts in the U.S.—thought it could get away with ignoring that contract, Erskine said, “Because they’re ruthless and they have deep pockets.”

Jane Slaughter is a former editor of Labor Notes and co-author of Secrets of a Successful Organizer.
Related
Hospital Workers Fight Job Cuts at Duluth’s Biggest Employer »
We Need a Disability New Deal, Too »
How the Coronavirus Crisis Became an Economic Crisis »
The Coronavirus Crisis Exposes How Fragile Capitalism Already Was »
Viewpoint: Trump, Carrier, and Corporate Welfare »