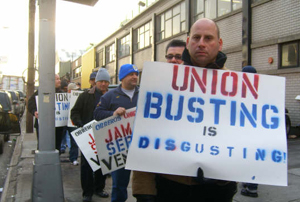 The mantra is jobs, and the government has unlocked the public coffers to subsidize employers that are hiring. But what kind of jobs are they creating with our tax dollars?

At Fresh Direct, an online grocer in New York, city and state tax incentives and grants worth more than $2.8 million have helped build a warehouse and delivery service.

Some 1,200 workers pack grocery bags and drive them to the customer’s door. Starting pay is $8 an hour and tops out at $11 an hour. Shifts can last 16 hours in a facility refrigerated to 38 degrees.

But fluctuating work schedules hold down wages. Workers will clock an extra six to eight hours one day, only to be told to stay home the next. The company fills in the gaps with temp workers to avoid paying overtime.

The health plan costs $500 a month for family coverage. Workers at top pay don’t have health coverage because it’s so costly. Female workers coming back from pregnancy leave are forced to re-enter at bottom pay.

Fresh Direct has a contract with the city for 15 years that locks in its subsidies—which will total $12 million in all.

But workers at Fresh Direct only make two-thirds of what other warehouse workers are paid in New York, according to Department of Labor statistics.

And when Teamsters Local 805 in New York started organizing the warehouse in 2007, the company fired key workers. Immigration authorities swept in on the eve of the vote, scaring away so many union supporters that the vote swung to management.

Most unions call it quits after such obstacles. But Local 805 is organizing at Fresh Direct again—and this time they have the second most powerful politician in New York City in their corner, together with a 48-1 City Council vote last December that shows political support for living-wage jobs and union neutrality is there.

The recently elected (and labor-backed) Public Advocate Bill de Blasio is demanding that companies like Fresh Direct that tap millions in taxpayer dollars are held accountable for the working standards public money creates.

“We essentially end up subsidizing some owners of big businesses to mistreat workers, keep profits for themselves and suppress fair bargaining,” de Blasio wrote in the New York Daily News. He’s calling for employers that take public subsides but don’t pay prevailing wages and respect neutrality during organizing drives to give the money back.

Local 805 President Sandy Pope says Fresh Direct has refused to remain neutral, so the union is mounting a campaign to highlight how the company is only too happy to take taxpayer subsidies and dish out lousy jobs. They’re planning a big rally outside the warehouse in early March.

Fresh Direct has dispatched letters to the City Council accusing the union of dishonesty and inviting members to contact management to arrange a walk through the plant.

"If they've got nothing to hide, then they should have no problem signing a neutrality agreement," Pope said.

Times are tough for unions in the private sector, of course, especially as the recession has battered the ranks by another 800,000 last year.

And “organizing unions” trying to turn the ship around often run aground during a campaign. Recent research showed that private-sector employers are more than twice as likely to threaten workers in union drives as they were 20 years ago—including firing them in one-third of all campaigns.

But rather than sit on their hands while the Democrats from Capitol Hill to the White House fail to deliver on labor law reform, some unions are pressing ahead, channeling the tide of workplace grievances into campaigns that put the heat on employers that pocket public money and create lousy jobs.

Related
Every Union Contract Right Now Should Be the Best Ever »
New Leadership, New Direction in Major Midwest Teamsters Local »
Ahead of Halloween, Sysco Teamsters Give Corporate Ghouls the Heebie-Jeebies »
UPS Says No to Air Conditioning, But Here’s a Surveillance Camera »
UPenn Teamsters Defeat Two-Tier »