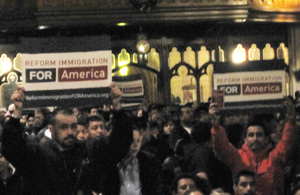 Federal agents with guns out and handcuffs ready took Maria Mena’s husband Felipe Angelus out of their car while driving home from a Detroit grocery store last April. He was deported to Mexico; that was the last time Mena, then eight months pregnant, or their three children saw him.

Anees Sous thought he’d found the American dream. Emigrating to Detroit almost 30 years ago from Palestine, he now heads a small trucking company. Married with six children, he was ecstatic that he was able to send his daughter to college.

After almost 30 years and $30,000 in lawyers’ fees spent embroiled in visa problems, Sous is scheduled for deportation next week. His wife and his children, however, have been legalized and will remain in Michigan.

Sous and Mena spoke at a pro-immigration reform event in Detroit’s Mexicantown last night along with elected officials, pastors and an imam, and other immigrants and organizations affected by America’s immigration policies.

Chanting “Si se puede! Yes we can!,” a feet-stomping, fist-pumping crowd squeezed into St. Anne’s Church for a rally yesterday urging Congress not to waste any more time and reform the nation’s immigration laws. Church pews, walkways, and hallways were crowded standing room only as demonstrators waved signs supporting immigration reform. Reverend Thomas Sepulveda, pastor of St. Anne’s Church, estimated a few thousand attendees, saying this was the biggest crowd he’s ever seen at his church for any of the number of events and rallies held over the years.

The Reform Immigration for America campaign (RI4A) launched events like this in all 50 states this week to support comprehensive immigration reform. As Michigan State Representative Rashida Tlaib pointed out during last night’s event, President Obama promised to support immigration reform this year.

Democratic Congressman Luis Gutierrez introduced an immigration bill December 15. No senator has yet introduced a companion bill. The Gutierrez bill is still in committee, and speakers at last night’s rally called for quick Senate action. Negotiations are ongoing between Senators Chuck Schumer, a New York Democrat, and Lindsey Graham, a South Carolina Republican.

Expressing bluntness uncharacteristic for a diplomat, the Mexican ambassador to the U.S. said last week he doesn’t have high hopes for reform to happen soon. He said he thinks immigration reform will be sidetracked by mid-term elections in the fall and high unemployment in the U.S.

Participants at Wednesday’s rally said they were sick of worrying about their loved ones and themselves and tired of immigration reform dragging on with no end in sight. “No other family should face what we are going through right now,” Sous said.

Although local unions endorsed RI4A's campaign in Michigan, including UNITE HERE, UFCW, Teachers (AFT), and AFSCME, union turnout was noticeably light last night. Unions point to their support behind the scenes. AFL-CIO and its Working America arm knocked on 10,000 doors in Southeast Michigan and collected 2,000 signatures supporting Gutierrez’s bill. “We in the labor movement know we need to raise wages for all workers, and raise protections for all workers,” said Chris Michalakis of the Food and Commercial Workers.

“Comprehensive immigration reform won’t be given to you—you need to make your voices heard,” said Pastor John Pitts with Interfaith Worker Justice. “This race that we’re in is a marathon...not given to the swift or the strong—it’s given to those that endure to the end. The prize is our families, our friends, and our future.”

To keep updated on the RI4A campaign, see their website or text “Justice” or “Justicia” to 69866. To read more and take action to support Anees Sous, see this website.