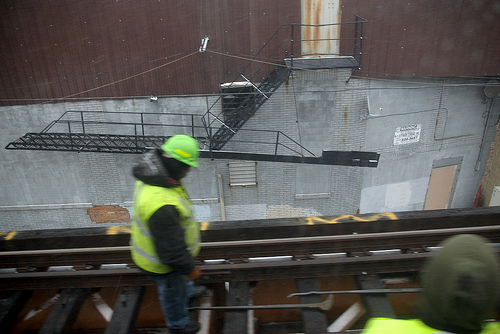 Putting videos in train locomotives will place blame for accidents squarely on individual worker behavior and ignore systemic factors like overwork and poor training that are the real underlying causes of most workplace accidents and injuries. Photo: Andrew Ciscel.

The National Transportation Safety Board’s ruling last week on the need for cameras recording locomotive engineers as they work is an attack upon all working people. Besides raising basic constitutional issues with the regard to the right to privacy, it is highly debatable whether or not implementation of such video cameras would diminish the likelihood of railroad accidents.

To begin with, we believe most railroad accidents are not caused simply by operator error. And those that are in fact caused by the operator, more often than not, are caused by things such as miscommunication, poor judgment, fatigue, improper training or lack of qualification—factors that video recorders in the cab of the locomotive are not going to correct or alter in any way. In fact, focusing on the individual worker rather than these systemic conditions misses the forest for the tree.

The Safety Board said the cameras would be “for use by management in carrying out efficiency testing and system-wide performance monitoring programs.” The fact is that management of Class I railroads already carry out massive amounts of efficiency testing of train crews—most do more testing than what is required by federal regulations—and have already put in place system-wide performance monitoring programs.

The current efficiency testing is done in the field under real-time conditions and specific to operating rules. How could it be better to replace that with a manager sitting at a desk staring at a monitor instead? Additionally, railroads already monitor, on a regular basis, the data from on-board “black box” recorders. They use computer programs to scan and analyze the data for violations of operating or train-handling rules.

All transportation workers should view the decision recommending train surveillance with alarm. If this decision is the right one for railroad workers, then why not truckers, airline pilots, ship captains and pilots? Why stop there—why not observe the dispatchers, track workers, machinists, ground support staff, dock workers and others whose behaviors could result in an accident? Taken to its logical conclusion, perhaps all workers should be constantly under surveillance, since failure to do one’s job in accordance with safety and security rules 100 percent of the time could potentially result in an accident or injury.

All workers—in fact all human beings—have the potential at any time to make a mistake, to become distracted, or otherwise perform imperfectly. Why not wire every workplace, every street to ensure that workers and the citizenry at large conform to “the rules” all the time? That way, if and when there is an accident, we will know exactly who to blame. Think of the savings for big business and insurance companies!

Constant audio and video surveillance has disastrous consequences for workplace morale, solidarity, worker rights, and in fact, upon safety itself. Because when employers can more easily pin blame upon individual workers for individual acts as the root cause of safety infractions, it lets the company and government regulators ignore the underlying causes of accidents. If blame now rests squarely on individual worker behavior, there is little incentive for the company to make the necessary investment to address systemic factors—dangerous conditions, lack of safety devices, overwork, low morale, poor training, worker fatigue—that are the real underlying causes of most workplace accidents and injuries.

Ron Kaminkow is a member of the Locomotive Engineers (BLET) Division 51 and Ed Michael is a member of Division 724. Both serve as officers in Railroad Workers United, a cross-craft union reform group.