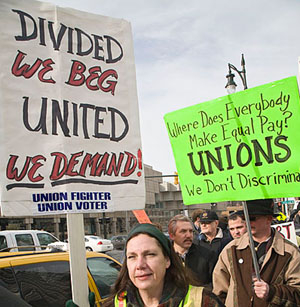 In January 2009 auto workers rallied at the Auto Show to demand positive government intervention in the auto industry, not a free hand to cut wages. Photo: Jim West | jimwestphoto.com.

Auto workers, retirees, and supporters will gather in front of this year’s Detroit Auto Show on January 11 to make clear the notion of a “jobless recovery” is no recovery at all in a state with the highest unemployment in the nation (officially at 14.7 percent).

They will not be alone. Nearby at General Motors headquarters in downtown Detroit, right-wing “tea-baggers” will be staging a rally against “Government Motors,” to protest against “the government takeover of America.” (See Monday's post by Jane Slaughter for the blow by blow).

Since the Wall Street meltdown in late 2008, auto sales plummeted from more than 16 million a year to close to 10 million, with no predictions of a comeback anytime soon. The billions of dollars loaned to two of the Big 3 as part of their bankruptcy proceedings in early 2009 only temporarily kept GM and Chrysler above water, while resulting in new rounds of plant closings, layoffs, and severe contractual takeaways from unionized workers, including freezing pay at $14 an hour for junior workers.

Monday’s auto workers rally will argue the government is letting an enormous opportunity go to waste. The rally will demand that the Obama government use its 60 percent stake in General Motors (and 10 percent at Chrysler) to direct a rapid conversion of idled and to-be idled facilities to produce green technologies and rehire the many unemployed workers in the region.

At the auto worker rally, organizers like UAW-American Axle retiree Wendy Thompson will call for a conversion “that takes us away from an economy based on non-renewable fossil fuels—which is critical to tackling the other crisis that is looming on the horizon, global warming.”

Dianne Feeley, another UAW retiree from American Axle, said the plants could be refitted to produce wind and water turbines and solar panels for clean energy, and components for public transit systems, including buses, light rail and high-speed rail, helping reduce the carbon emissions that are throwing the planet’s climate dangerously out of balance. “Axle plants would be particularly good for producing wind turbines,” Feeley noted.

Continuing with the themes of last year’s Auto Show demonstration, which brought out 150 workers in cold weather, rally participants will reaffirm their support for the Employee Free Choice Act, a means to enforce workers’ rights to join unions with less employer interference, and for single-payer, “Medicare for all” health care—the only way to hold down the auto companies’ health care costs that doesn’t require decimating worker and retiree health coverage.

In the meantime the tea-baggers will be giving lip service to the “good folks of Michigan” who need jobs, all the while berating the Obama administration for preventing the total collapse of GM and Chrysler. “While the extreme right thinks the government did too much,” Thompson said, “auto workers think so far it has done too little.”

The rally is sponsored by Autoworkers Caravan.