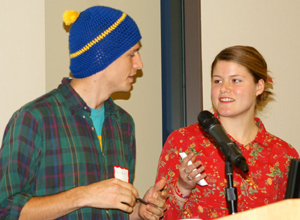 A daylong school held Saturday by the Vermont Workers Center and Labor Notes drew more than 200 participants, a good cross-section of Vermont’s labor movement. Their frankness about the weaknesses of our movement vs. the challenges capitalism has in store may sound tailor-made for a depressing day—but the atmosphere of openness was energizing and unprecedented for a Vermont labor event.

At the same time 800 miles south, about 60 workplace activists from North Carolina, South Carolina, Tennessee, Georgia, and Virginia gathered in Raleigh to spell out the problems keeping Southern workers out of unions—and craft some solutions. (There’s more on their meeting below).

In Vermont, the format was an experiment, with several different unions holding their own meetings in the morning, including Vermont-NEA, United Professions of Vermont-AFT, United Academics-AFT, and the Communications Workers (CWA) and Electrical Workers (IBEW).

Those meetings took place side by side with open workshops: Involve Your Members & Build A Strong Union; Lessons for Labor, Past & Present; Healthcare Is a Human Right—Organizing for Change; and Coming to Terms with the [telecommunication firm] FairPoint Bankruptcy.

The afternoon was full of talks and small-group discussion. Labor Notes’ Mark Brenner outlined the long-term factors that led to the current financial crisis and challenged the idea that we can “put our heads down and wait for the storm to pass.” (See the video on on the left.) Two rank-and-file Teamster bus drivers—newly minted members of Teamsters for a Democratic Union—presented an irreverent skit, with audience participation, to illustrate their insurgent contract campaign and “take back our union” drive.

All the way from California, Sarah Knopp of the United Teachers of Los Angeles gave a superb report on the UTLA and community fight against draconian staff cuts and the emerging statewide coalition between public education unions at the K-12 and higher ed levels, now mobilizing for a March 4 general education strike. Labor Notes Policy Committee member Steve Early, up from Boston, linked the austerity imposed on public employees at home with the ever-expanding military spending abroad in Afghanistan and Iraq.

A key organizing goal—inter-union networking to build solidarity—was clearly achieved. On the day before the conference, Vermont media announced that leaders of the independent Vermont State Employees Association had accepted a giveback contract with wage cuts and no guarantees against layoffs for 7,000 state employees. Conference participants were asked to help build a “vote no” campaign by writing letters to Vermont newspapers, and by the closing session dozens of volunteers had signed up. By today those letters are already flowing in to the media.

‘WE DON’T HAVE TO WAIT TO GET ORGANIZED’

New York state has more union members than all 12 Southern states combined. That comment, made early on at the Southern Workers School this Saturday, was met with solemn—but not surprised—murmurs from the crowd. The event they attended was brought together by Black Workers for Justice, its Communiversity project, and Labor Notes.

Participants identified plenty of reasons for the disorganized workplaces Southern workers face, focusing on the failures of the national labor movement and discrimination faced by workers of color, particularly black workers, whose unionization rate has been dropping steadily. (It’s down to 15.5 percent from 31.7 percent in 1983.) One attendee said there’s “a different kind of meanness” rampant in today’s cut-throat economy that keeps folks from building solidarity. Whatever the problem, these workers want to fix it.

Nichele Fulmore, a UPS driver from Lumberton, North Carolina, said union members have a special responsibility to support efforts to organize the South. She was talking to the right audience—union members peppered the crowd. Most were members of non-majority unions, unions that form without a majority at the workplace and which—in the public sector at least—are prohibited by state law from bargaining collective agreements.

“We are a union,” insisted Saladin Muhammad, a leader with United Electrical Workers (UE) Local 150, a non-majority public sector union in North Carolina. “We do more for our members daily than most unions do.”

A Local 150 member from a nearby hospital explained how the union helped them fight against terminations that were disproportionately handed to black workers on a consistently understaffed floor.

One participant argued that activists can’t rely on supportive legislators to change state laws for them. “We have to do this ourselves,” she said. “We don't have to wait to get organized.”

A workshop on how to build a union without collective bargaining rights explained how to do that. Representatives from CAAMWU, a unit of Local 150 that represents private-sector auto-parts workers, and the United Campus Workers, a CWA division that has nearly 1,000 members in a non-majority union in Tennessee, led a discussion on the nuts and bolts.

CAAMWU has been busy fighting for recall rights for workers who get fired at-will, and UCW is running a “chop from the top” campaign against universities that cut pay and jobs for their members but not for well-paid administrators.

Related
Race and Labor: Let’s Talk About the Elephant in the Room »
Building an Army to Fight Runaway Inequality »
Interview: Organizing to Learn, Learning to Organize »
Labor Goes to Summer School »
Trainings Take Off »

For many weeks I had been looking forward to the Southern Workers School . But I never anticipated the energy and inspiration I would experience in the few hours spent with my Sisters and Brothers from different unions from around the South.
Joining in as a 30 year Teamster I found a diverse, courageous and accepting coalition that was dedicated to the task of finding common ground amongst varying philosophies and socio-economic and cultural backgrounds.
The over all theme as I saw it was:
"How do we build on what we have in common? Then we can work on our differences!"
I participated in the "Building Broad Labor Community Struggles" workshop with the founders of the Virginia Peoples Assembly. I listened as two activist citizens went on and on about what can be done in a community when 'common ground' is achieved between organizations that are seeking the same goal. It was mesmerizing. I thought, "So this is how it can work!" Seeing was believing!
Thanks to Labor Notes for making this event available. It was well worth every moment!