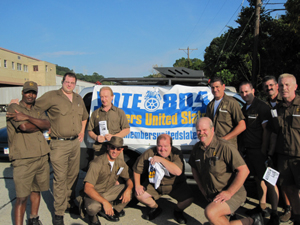 UPS Teamsters in New York City voted in a reform slate by to a 2-to-1 margin Thursday. It’s the second win in as many months for Teamsters reformers in the city. Photo: 804 Members United.

Spend 10 minutes in Times Square and you’ll see a big piece of what keeps New York humming—thousands of UPS drivers hustling packages long after those guys down in Wall Street have headed to the bar.

New York is home to 7,000 UPS Teamsters, and today they voted in a reform slate 2,348 to 1,091. It’s the second win in as many months for Teamsters reformers in the city, joining the commercial movers in Local 814 in the winner’s circle.

The campaigners organized the old-fashioned way, leafleting at all 13 facilities for months, holding meetings for a year in advance of the vote, gathering thousands of phone numbers and emails for their get-out-the-vote push, and building a member-to-member network in the local that promises to jumpstart their work in office. Their campaign was aided by Teamsters for a Democratic Union, the longtime reform movement in the union.

New York’s UPS union, Teamsters Local 804, has long been a bastion of militants. It was the home of Ron Carey, the first democratically elected president of the Teamsters, who went on to lead the famous “Part-Time America Won’t Work” strike in 1997 at UPS. The 804 Members United slate promises they’ll be going toe to toe with management in the Carey tradition.

They’re promising to hold the company to its pledge to create more full-time jobs, and to expand representation round-the-clock while cutting officers’ salaries by $400,000.

Although the ousted incumbents inherited Carey’s local, they lost touch with its spirit—and what was happening in the workplace.

UPS is protecting its bottom line during the recession by squeezing workers more than ever. They’re forcing drivers to deliver more packages per hour and driving senior workers off the job with stepped-up surveillance and harassment. The old leaders had no plan to defend their members.

And they succumbed to the arguments made by Teamsters International President James Hoffa’s administration: that the only way to survive as a union in America today is go along with management, not stand up and fight.

Their limited vision led to a string of disappointments culminating in a 2007 contract that would have given up the local’s 25-years-and-out pension for new members.

A group of active members that became the reform slate led a “vote no” campaign that bucked the local leadership, turning down a weak UPS contract and preserving the 25-and-out pension.

In an era where pensions are getting destroyed across the country, it was an inspiration to see union members reject their leadership’s willingness to settle short. And it’s a good thing they maintained the pension, because delivering packages is one of the most demanding jobs in the city. Just ask your UPS driver. Here in Brooklyn our UPS guy (we’re withholding his name for his privacy) was out for two months last year recovering from knee surgery, brought on by the faster pace of the work. He’s only got a dozen years on the job.

Mark Brenner is the former director of Labor Notes and is currently an instructor at the University of Oregon's Labor Education & Research Center.
Related
Labor Notes Conference 2022: It’s Gonna Be Big »
Here's What's in the New Bill Jointly Backed by Uber and the Teamsters in Washington State »
UPS Drivers Stage a Walk-in to Defend a Fired Co-Worker »
Auto Workers Win Direct Democracy in Referendum »
Teamsters United Takes the Wheel »

804 is the local in New York that Ron Carey ran for years. Howie Redmond has run the local for a while now and from what I have heard from friends of mine that I meet on this site, he has lost touch with the members. Members united slate consists of some of Carey's strongest supporters and some new blood. Remember this is the same local that lost the production arbitration. Congrats to Brother Tim for winning.