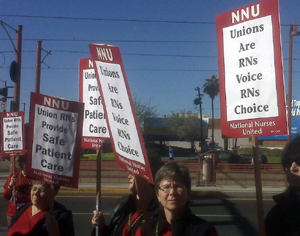 Registered nurses from across the U.S., with guests from as far away as Canada and South Africa, gathered this week for the founding convention of the National Nurses United, destined to be the largest RN union in the country's history.

Among the states represented were California, Massachusetts, Minnesota, Maine, Michigan, Pennsylvania, Illinois, Kentucky, Texas, Nevada, and the District of Columbia.

Of prime significance was the presence of a delegation from the Veterans Affairs system represented by the United American Nurses. This national VA bargaining unit holds nurses from 13 additional states, and many thought they would decline to join the NNU. The UAN has been consumed by a contentious, litigation-filled atmosphere in recent months (see Labor Notes, December 2009).

All warmly embraced, and many nurses, leaders and rank and filers together, took the mike. Mike D'Intinosanto from Massachusetts and Trande Phillips from California approached the mike together to call for vigorous support for a national legislative agenda, including safe RN-to-patient ratios, the Employee Free Choice Act, and real health care reform—single payer.

A delegate from Kentucky recalled that two years ago, while on strike against the Appalachian Health System, CNA and the UAN together brought real support. Having been dumped by the Kentucky Nurses Association at the end of the strike, those nurses have reconstituted themselves as the Southern United Nurses, and are now working to let the “SUN shine” on organizing all other front-line nurses. A repeated theme throughout these spontaneous remarks was how long overdue this formation of a national voice for frontline nurses is.

Delegates moved quickly to adopt unanimously the draft NNU constitution. The slate of officers proposed by the three merging nurses' unions, including three presidents and eleven vice presidents, was elected unanimously. Martha Kuhl, CNA-NNOC treasurer, was nominated for NNU secretary-treasurer from the floor and unanimously elected. The proposed dues policy was duly approved.

The essential business before this body was clear and everyone present knew why they were there. Unanimous votes followed in swift succession.

The conclusion of this business meeting unleashed a torrent of joy. John Karibian from Michigan and I shared a comradely embrace. After sharing in the fights to democratize the management-dominated American Nurses Association in the ‘90s and after the separation caused by disaffiliation, our states were united again, but on a much higher level.

Nurses young and old discussed their experiences in three panels Monday afternoon, followed by a panel composed of the three newly elected co-presidents, Karen Higgins of Massachusetts, Jean Ross of Minnesota, and Deborah Burger of California.

Jeff Breslin from Michigan moderated the panel on today's challenges. Phillips described how recent technological changes are often designed to make nurses "responsive to the machine." She held up a new "Technology Despite Objection" form. She suggested that every nurse's contract needs language that technology will not be used to supersede the nurse's professional judgment.

Donna Kelly-Williams from Massachusetts outlined the plight of those falling victim to mounting insecurity and joblessness as mental health and substance abuse programs are slashed. She described how the injustices built into the Massachusetts health plan created in 2005 and the cutbacks introduced to bail it out have undermined the ability of safety net facilities to cope with this economic crisis.

The national health care reform fight was on everyone’s lips.

“Who was at the debate?” asked Karen Higgins of Massachusetts. “Insurance, hospitals, PhARMA (the pharmaceutical lobby). Where were we? The few times we were supposed to be there, ANA was standing there. How can you have this discussion without our presence?”

Lorna Grundeman from California described the experience of forging a master agreement for the Catholic Healthcare West chain in California and Nevada, with the demand for occupational safety in the face of the spread of the H1N1 virus. A 97 percent strike vote followed a period of intense internal organizing.

The presidential panel examined what it took to get us here and what we need to do now. Jean Ross greeted the UAN's VA Council, which overcame the lies regarding the proposed NNU that had been foisted upon them. She thanked the legal team that beat back the divisive assault.

Higgins recalled the March 24, 2001 meeting in Worcester, Massachusetts, the largest gathering of nurses in the history of the state. The first vote was to disaffiliate from ANA. The second vote, following swiftly, was to form a national nurses union. "Nine years later we accomplished that."

Two thoughts immediately arose, she said: "What took us so long?" and "Don't screw it up!"

Higgins pointed out that, with 23,000 members, Massachusetts has done well on issues affecting our practice. "But we don't live on an island," she said, observing that New Hampshire has passed legislation to allow unlicensed personnel to give out medications in hospitals. Connecticut has passed a weak "safe staffing" bill that has harmed our attempt to push forward in Massachusetts. How do we stop it? "Organizing: we need to organize every nurse," Higgins concluded.

Tuesday morning opened with presentations on collective bargaining strategy and tactics. Samples of model contract language were circulated by Californians, while Massachusetts stressed leadership development as concretized in its Labor School. The idea was raised of organizing a national labor school.

There followed a demonstration outside the offices of the Arizona Hospital Association. Nurses in Flagstaff and Phoenix have been trying to organize, and they have been viciously thwarted thus far by professional union busters paid $900 an hour. Chants and freedom songs punctuated the rally, and the Communications Workers, Service Workers, and other unions were represented at the rally as well. The convention's final session heard the charge from Rose Ann DeMoro, NNU's newly chosen executive director, to pool resources in order to organize on a scale never before seen and to supplant the voices of the tea baggers. Delegates began their trek home to take up the challenge.

Sandy Eaton is a Massachusetts nurse and NNU delegate.