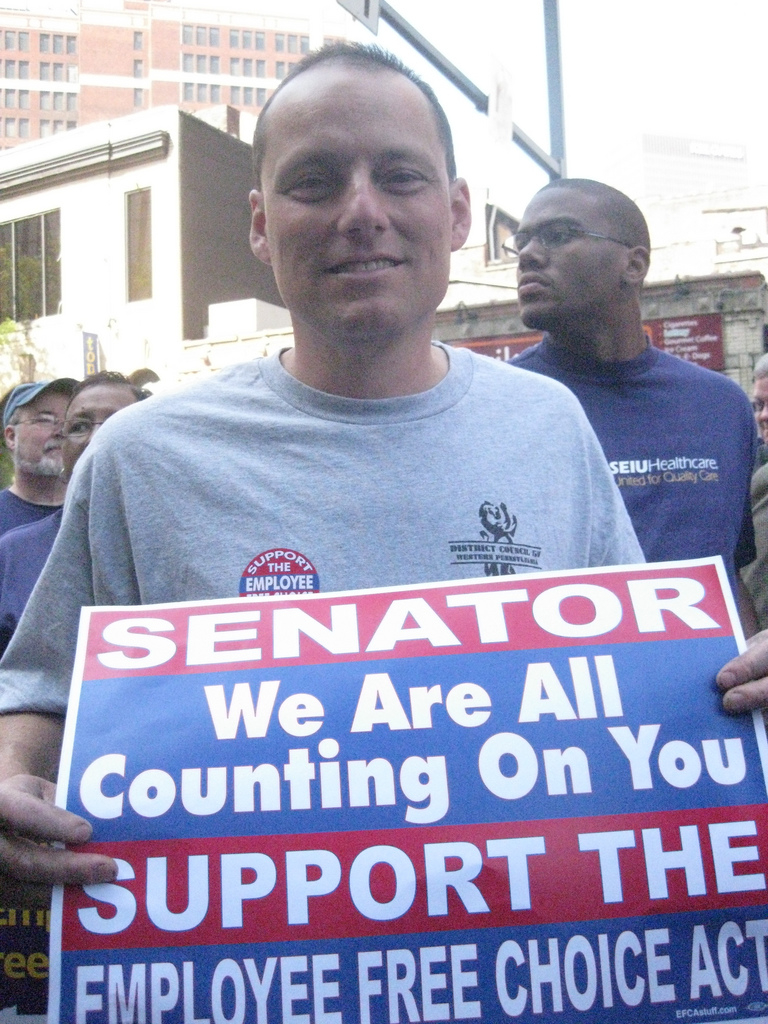 Stewart Acuff, coordinator of the AFL-CIO's Employee Free Choice Act campaign, told Labor Notes that a deal on EFCA has been made: it’s the same three provisions as the original bill except that we’ll get expedited elections—seven days—instead of card check. (The other two are heavier penalties for labor law violations during organizing drives and some form of arbitration of first contracts.)

Pennsylvania Senator Arlen Specter, a recently minted Democrat after helping craft Republican policies for the better part of three decades, told reporters that he’s one among six senators helping craft an EFCA compromise: it would include expedited elections, triple damages for labor law violations, and arbitration. Specter claimed to have in hand the 60 votes needed to stop a filibuster. (Some reports late Tuesday also said the compromise bill would include access for union organizers to the workplace.)

Separately, incoming AFL-CIO President Rich Trumka told reporters that the provisions of EFCA have gotten “muddied up” but emphasized that there is no deal on an EFCA compromise.

Communications Workers President Larry Cohen dropped by the press room to say that talks of a finalized EFCA are premature with an open seat in the Senate following Ted Kennedy’s death. “We negotiate when we have 60 votes, and we have to get that done in Massachusetts or it’s 2010 (for EFCA),” he said.

Regardless, he said, senators won’t be working out the final provisions by themselves, and union leaders like him who have championed the bill will stay closely involved.

Unlike reporters covering the convention, though, the elected delegates aren’t being told anything. There’ve been no updates on what might be on or off the table—although it’s been said for weeks that card check is a dead letter.

Cohen said the “key principle is we want to organize without massive employer interference, and we’re not going to back away from that.”

Specter predicted to the delegates that a bill will pass “that will be totally satisfactory to labor.” How are delegates to judge? Do they get any say about what might satisfy them?

Jane Slaughter is a former editor of Labor Notes and co-author of Secrets of a Successful Organizer.
Related
The Hows, Whys, and Whats of ULP Strikes »
We Can't Just Keep Saying 'Pass the PRO Act.' We Have to Organize. »
Richard Trumka, 1949-2021 »
BREAKING: Draft Legislation in New York Would Put Gig Workers into Toothless 'Unions' »
Viewpoint: Who Invited Them? Employers Like Amazon Should Have No Say in How Workers Organize »