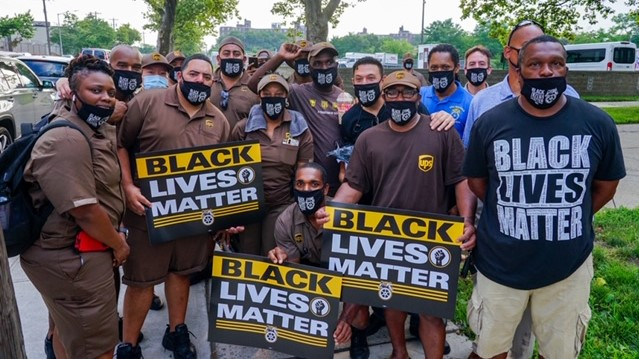 Unions around the country joined a July 20 day of protests for Black lives and Black workers' concerns. In Brooklyn, 100 UPS workers rallied to protest management’s harassment of a Black shop steward and efforts to divide the workforce along racial lines. Photo: Teamsters Local 804

A hundred members of Teamsters Local 804 gathered outside a Brooklyn UPS hub July 20 to protest management’s harassment of a Black shop steward and efforts to divide the workforce along racial lines.

It was Local 804’s way to mark the global “Strike for Black Lives,” a day of protest (though it included few conventional strikes) called by a constellation of unions and organizations including the Service Employees (SEIU), Teachers (AFT), Transit Union (ATU), Teamsters, Communications Workers (CWA), UNITE HERE, Farmworkers (UFW), and Food and Commercial Workers (UFCW).

But the fight at the Foster Avenue facility was brewing long before July 20, and shows no signs of slowing.

UPS IN THE TIME OF CORONA

While millions of Americans are out of a job, UPS Teamsters are working harder than ever. Across the country, package delivery volume is up to levels comparable to “peak season”—the several months around the holidays when UPS workweeks approach 70 hours and backbreaking loads require the help of seasonal hires and extra rental trucks.

At Foster Ave., with air conditioning that frequently doesn’t work and a roof that has caved in multiple times, a massive workload in the summer heat pushes workers to a breaking point. Add to that a draconian company that abuses the union contract, and a divide-and-conquer management style.

Antoine Andrews has worked at Foster Avenue for 24 years, and has been the lead steward for four. When the pandemic hit, he found the increased volume and deteriorating conditions meant more contract violations. He started filing more grievances—supervisors working, too many routes designated for trainees, and violations of seniority when assigning routes. Immediately, he was met with retaliation.

“After peak season, we go out with an average of 120 stops [a day],” said Andrews. “We’re seeing members with 300 stops. I was only doing what I was capable of doing, giving them a fair day’s work for a fair day’s pay, and taking back the rest to the facility.”

He asked for help, but management refused to send it his way. “The practice is to say, ‘Hey I need help,’ just to cover yourself,” Andrews said. “There are times they send help, but what I started to notice was this sup was not sending me help, on purpose.

“Another steward overheard the supervisor say that if I keep filing these grievances, he’d rather keep me out there.”

The message was clear: grieve contract violations, and you’re on your own.

It was in this context of retaliation that management moved to divide and conquer, Andrews alleges. UPS drivers select their preferred routes on the basis of seniority. If you’ve worked longer in your building or “center” (a subdivision of UPS buildings), you get a higher bid.

In Andrews’ center, there was a case where two drivers, one white and one Black, had the same seniority date. In a random tiebreaker, the Black driver got the route. Management saw an opportunity, and took it.

According to another steward, the supervisor who had been retaliating against Andrews started going around to members, saying “[Antoine]’s only taking care of the brothers.”

It was time to escalate. “At Foster Avenue specifically, there’s been a lot of tension for the 25 years that I’ve worked at UPS,” said Local 804 President Vinnie Perrone, “and it seems like it’s gotten worse and worse.

“When you talk about UPS management, they have a very, very distinct way of browbeating people and intimidating people. I think that’s what they were doing to stewards in the building, in an effort to divide and conquer the membership.”

All this happened before the murder of George Floyd and the resurgence of the Black Lives Matter movement.

As part of that movement, the Teamsters and seven other national unions endorsed the July 20 Strike for Black Lives. Unions organized actions in 150 cities across the country; solidarity activities took place across the world. Most of the actions were demonstrations or short gatherings.

In New York City, while Local 804 rallied in Brooklyn, Teamsters at the Hunts Point Market in the Bronx stopped work for eight minutes and 46 seconds of silence in honor of George Floyd. Members of the Communications Workers in Memphis, Tennessee, protested outside an AT&T Mobility call center where 10 out of 20 new hires had contracted COVID-19 after the company refused the union’s request to do their training remotely. The union pointed out the company’s hypocrisy in issuing statements supporting the Black Lives Matter movement while ignoring the demands of the disproportionately Black and female Memphis workers.

Elsewhere, workers held lunchtime speakouts, rallied against incidents of racism on the job, and demonstrated at state houses in support of the HEROES Act, which would continue expanded unemployment benefits, provide hazard pay for essential workers, and offer federal aid to state and local governments.

A SHOW OF FORCE

For Local 804, the Strike for Black Lives was a perfect occasion to amplify the fight at Foster Ave. The local decided it was time for a show of force. A hundred members gathered outside the building with a Black Lives Matter banner and an inflated “fat cat” holding a UPSer by the neck.

Stewards and members of the executive board spoke on the theme of “an injury to one is an injury to all.” The Teamsters international shared Andrews’ story on social media.

July 20 was a Monday; the local kept the action going all week. Each morning, union reps would bring out the fat cat, while members and officers stood outside with the banners, building up to a Friday demonstration.

“Our presence outside was very impactful,” said Andrews. “We saw signs that the company was being annoyed.” When the business agent arrived at 4:30 a.m. Thursday to set up the fat cat once again, UPS had stationed two of its box trucks in front of the spot. The business agent called 311 to get the cops to come and ticket the trucks.

To organizers’ surprise, Friday’s demonstration was even bigger than Monday’s. It started at the subway station down the block where members often congregate on their way to work. In an unplanned march to the building, members chanted “What do want?” “Dignity and respect.”

What comes next? “I’d like to see 804 and Teamsters overall continue this momentum,” Andrews said, “and show the world and these big corporations that we are here to support our members. We’re here for humanity. Whether they’re Black, white, or Hispanic, an injury to one is an injury to all.”

The fight at Foster Ave isn’t going away. Late Friday night, after the biggest rally day yet, the emergency response unit of the NYC Department of Buildings shut down part of the facility due to the collapsing roof, determining that “conditions in this premises are imminently perilous to life.”

As one worker put it, “We have a billion-dollar company and our building is falling apart? Really? At the end of the day, I wish it would’ve fell on me, that would’ve been great. UPS would’ve said, ‘It’s your fault.’”

Jonah Furman was the national labor organizer for the Bernie Sanders campaign. He is a former Labor Notes staffer.

Related
Frustrated Over Contract, Locomotive Engineers Vote to Oust President »
Every Union Contract Right Now Should Be the Best Ever »
New Leadership, New Direction in Major Midwest Teamsters Local »
Ahead of Halloween, Sysco Teamsters Give Corporate Ghouls the Heebie-Jeebies »
UPS Says No to Air Conditioning, But Here’s a Surveillance Camera »