The VA’s Fourth Mission and the Pandemic 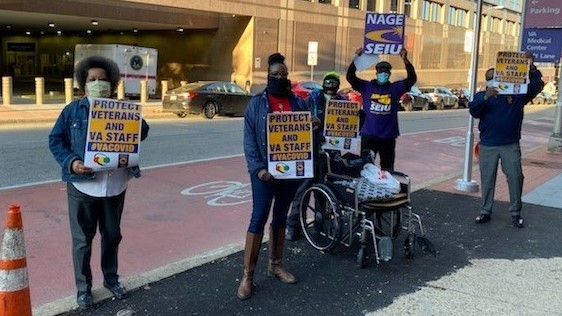 This is the second in a two-part series that looks at the Veterans Health Administration (VA) and its role during the pandemic. Part One looked at the often-unrecognized strengths of the VA and examined the Trump Administration’s myriad attacks on the VA. Part Two looks at the serious consequences of those attacks during a pandemic, and how unions and community coalitions are fighting back. Finally, it considers the implications for a national health care system in the U.S. –Editors

The VA’s “fourth mission” is to provide backup health care for veterans and even civilians in emergencies. The VA is expected to have the expertise, emergency-ready volunteer personnel, supplies, and equipment to mobilize in disasters. It has participated in pandemic planning as far back as 2006, and has mobilized well during previous emergencies, such as Puerto Rico after Hurricane Maria, Houston after Harvey, and after the California wildfires.

However, the administration’s attacks have left the VA in a weakened position to deal with the coronavirus as a national emergency.

The VHA, like other hospital systems, canceled non-urgent appointments and procedures to clear space and save supplies to handle a possible influx of infected patients. Because of this, many VA hospitals have been quiet lately, with fewer patients on-site, and essential medical care continuing.

As of May 5, there have been 9,691 positive cases and 770 inpatient deaths of veterans nationally. A number of areas have been hit especially hard: the two VA facilities in NYC reported 144 deaths and 1781 positive cases; the New Jersey VA has had 71 deaths, and Louisiana 51; Baltimore, Washington, Detroit, and Boston are also hot spots. The VA in my home state of Oregon reports 19 positive veteran cases, and just two deaths; other VA facilities have also seen relatively few cases.

Many cases have been reported in “veterans’ homes,” as in long-term care facilities everywhere; these homes are state-run facilities for aging veterans, financed but not run by the VA.

In late March, at the height of the crisis, the VA planned to open just 50 hospital beds to non-veterans in New York. By mid-April, a total of 170 civilian COVID-19 patients had been treated at VA hospitals in four states: New York, New Jersey, Michigan, and New Mexico. On May 1, the VA reported 11 civilian patients in its New York hospitals. A number of other VA hospitals were getting ready to take care of civilians, and a handful of emergency teams were mobilized from around the country to work in COVID-19 hot spots. As time has passed, more VA volunteers have been mobilized. Beginning the third week of April, many VA workers have been deployed to help staff at hard-hit veterans’ homes and also civilian nursing homes in several states.

Although the VA’s “fourth mission” response has certainly been helpful, why wasn’t its response faster, or more robust?

As a recent review (titled sharply “VA Hospitals Are the U.S. Safety Net. Covid-19 Exposed the Holes”) explained: “staffing.” Although the VA system nationally has had reserve bed capacity in its wards and ICUs, including special “negative pressure” rooms, the limiting factor has been staffing in the severely affected areas. With short staffing to begin with, there has also been increased absenteeism in the most affected areas during the pandemic. Without adequate numbers of VA doctors, nurses, and other workers, that reserve capacity could not be aggressively utilized.

The disorganization and lack of PPE within the VA didn’t help, either.

POOR LEADERSHIP AT THE FEDERAL LEVEL

As the country is now acutely aware, emergency mobilization by the federal government, including the VA, was delayed by the Trump administration’s slow and chaotic response to the coronavirus. Federal public health officials, including VA physician Dr. Carter Mecher, had pushed for a serious emergency response as early as late January, but were largely ignored.

The VA’s own pandemic response has been limited by its poor leadership, chronic short staffing, absenteeism during the pandemic, and inadequate stockpiles of protective equipment and testing supplies. In March, just a couple weeks after VA Secretary Robert Wilkie denied needing any additional resources, the VA’s own Office of Inspector General found inadequate supplies of personal protective equipment (PPE) and testing kits at many of its facilities.

The chaos and scandals around access to supplies of life-saving PPE have been one of the most appalling aspects of the federal response, directly affecting supplies of PPE at both VA and outside facilities. Instead of coordinating the supply and distribution of these essential supplies, the Federal Emergency Management Agency and the federal government have contributed to the problem. The VA hasn’t helped.

(The consequences of offshoring the majority of the country’s PPE supplies, and the subsequent loss of US production capacity nationally, is another story, one which will not surprise labor and fair trade advocates.)

For VA workers, like other health care workers, COVID-19 has created an incredibly dangerous work environment.

There have been more than 1,600 positive cases of COVID-19 among VA workers. Many have fallen ill, and at least 23 have died of the virus. Others are on leave, needing to protect themselves or family members from infection, or because of childcare responsibilities.

Safety concerns abound. Workers on-site often find it impossible to implement social distancing, with little support from supervisors. Coronavirus testing is still not broadly available. Telework isn’t provided for all who could easily do their work at home.

For weeks, we have heard repeated and frightening reports of the inadequate supplies of personal protective equipment (PPE) at many VA facilities around the country, while VA spokespersons denied this to be the case.

Nurses have been particularly vocal, complaining that they are expected to re-use PPE, a practice that would have warranted a disciplinary write-up just a few months ago. Employees report that the health and safety guidelines from their administrators are constantly changing.

On April 22 several senators raised an alarm, demanding that VA Secretary Wilkie respond to allegations about inadequate supplies of PPE and other safety issues. And on April 25, after months of worker complaints and stonewalling by the Agency, VHA executive Dr. Richard Stone finally acknowledged that, in fact, there was a shortage of PPE. He also confirmed that FEMA had diverted supplies which had been ordered for VA use.

NOT AT THE TABLE: WORKERS’ VOICES

Outrageously, in the midst of the pandemic, VA leaders continue to exclude the voices and expertise of workers.

In March, five unions representing VA workers issued a joint statement declaring their utter dismay at the VA’s “lack of preparations, planning, and communications so far in response to COVID-19” and calling on management to work with the unions to make sure that the “nation’s health facilities can safely handle COVID-19.”

They wrote, “We know our VHA system is superior in many respects to the private, civilian health care system and we have the know-how, capacity, and skills to tackle this virus. We can set an example for the country, and look forward to working with the VHA to implement our demands.”

But in a subsequent letter to Congress, the unions wrote that the VA was still “refusing to include our union leaders, our health and safety experts and the front-line health care workers we represent in the Department’s response to COVID-19.”

A recent AFGE petition by VA employees demanding “safe working conditions and protections for veterans” makes it clear that this situation has still not changed; conditions remain critical.

On every front, VA workers and their unions continue to push back.

They are meeting with management; filing OSHA complaints, local and national grievances, and class action suits; lobbying and activating members of Congress; and raising their demands through social media, press statements, TV appearances, online petitions and social-distancing rallies. Well-publicized rallies by VA workers demanding PPE have occurred around the country, and the media is interested.

AFGE and other unions’ first priority is for adequate PPE, using the Defense Production Act if necessary.

Another significant demand is for presumption of workplace illness: allowing an automatic presumption of workplace illness for employees who have contracted COVID-19 on the job; this would expedite FECA claims (federal Workers Comp equivalent). Among the other demands for Congressional action are: hazard pay; telework; approved leave for employees who can’t work due to health and safety risks; flexibility with health insurance enrollment; and a restoration of labor/management relations.

The dual catastrophes of the coronavirus pandemic and the economic meltdown have left Americans vulnerable and reeling. Approximately 12.7 million of those who have lost their jobs in the pandemic have lost their health insurance as well. They join more than 28 million Americans who were already uninsured, and many more who are dangerously under-insured.

On the other hand, the 9 million veterans enrolled with the VA know that their access to health care is secure, and there will be no financial barrier to that care, either.

The folly of linking health care to employment has never been clearer. Our fragmented, profit-oriented health care system has failed us. This is a particularly bad time to be uninsured, and people are desperate.

In the short run, let’s pass the Sanders/Jayapal Health Care Emergency Guarantee Act to directly cover all necessary medical care during this crisis. Then we need to campaign for Medicare for All, and progressive unionists need to push our unions to get on board. Employer-based health care is no longer a safe solution for anyone, and it’s time for labor to lead this fight.

In a pandemic, a national health system is very helpful for a successful response—though certainly not sufficient. Italy, for example, has had a disastrous outbreak. An analysis in The Nation makes the case that it was strategic early missteps, as well as austerity-triggered cuts to their public single payer system, which impaired Italy’s response.

Italians’ support for their single-payer system remains strong. Canada and other countries with a national health care system have experienced a much more successful and well-coordinated response than the U.S.

Here, the administration’s mistakes and delays in COVID-19 response have been inexcusable, and deadly. Its ongoing attacks on the public sector, a misguided dependence on corporate and politicized solutions for public health problems, and cuts to essential programs have had enormous consequences.

A national health system, on the other hand, could prioritize public health planning and preparations; it could direct federal resources where most needed; and it could begin to address the horrific racial disparities we are seeing with COVID-19.

The VA’s model of health care, so well documented by Suzanne Gordon, shows us what a good national health system can look like—at least under a more rational administration. That hopeful vision is needed now more than ever: we need reminders of what great public institutions can look like.

With the growing movement for single payer health care, the last thing that the for-profit health care, insurance, and pharmaceutical sectors want is a reminder that the VA, a public institution, does a better job, at a better price, than they do.

The health economist Victor Fuchs has written that “(n)ational health insurance will probably come to the United States after a major change in the political climate—the kind of change that often accompanies a war, a depression, or large-scale civil unrest.” Perhaps, with the coronavirus pandemic, we are at such a moment.