How Amazon Workers Are Organizing for the Long Haul 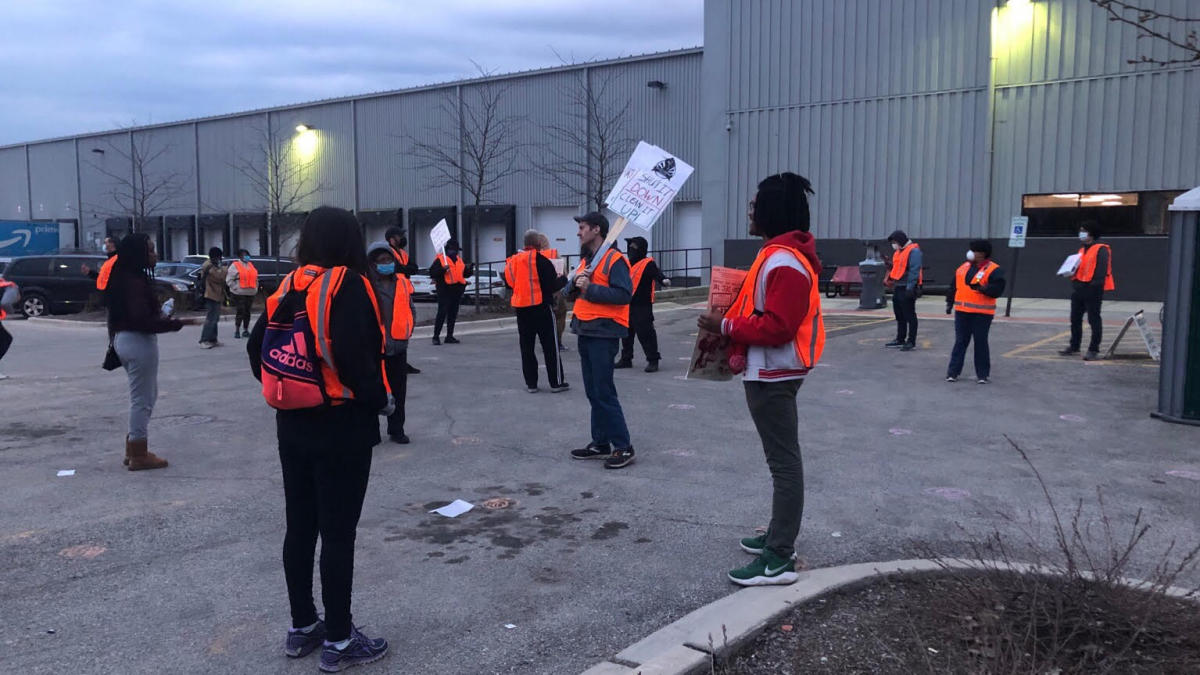 Amazonians United organized several strikes at Chicago's DCH1 facility to demand that Amazon “shut it down, clean it up.” Photo: María R González.

Amazon logistics workers have won much attention for organizing during the pandemic. Around the country workers have signed petitions demanding protections, and in New York, Michigan, Illinois, and Washington, some have even struck and walked out.

These actions have generated support from our tech coworkers in Amazon's Seattle headquarters, politicians, and the wider public. Given Amazon’s centrality in our economy, this marks a crucial moment for the wider labor movement.

As the dust now settles and the company seeks to revoke temporary gains such as a $2 wage increase and unlimited unpaid time off, it is important to work out a long-term strategy for building power.

Worker-organizers especially experience the benefits of the spotlight but also the consequences. Already we've seen disconnects between the amount of organization workers have in the workplace and how their actions are portrayed in news coverage. This discrepancy can expose workers to discipline before having the strength in our workplaces to fight back.

Here we explain our method for steadily growing our numbers and ultimately the power to speak out and stay safe for the long haul.

Our method is simple. We think big but start small, building on wins that grow our confidence in taking greater risks over time.

It started last year at the DCH1 delivery center in Chicago as a group of workers bonded together to fight for water in the hot summer. After their organizing committee went public as Amazonians United, a group of workers in a Sacramento delivery center came together to fight to reinstate a fired coworker and for the right to paid time off denied to part-time workers. They joined the Chicago workers under the Amazonians United banner, forming their own local.

Connecting through social media, organized coworkers in Queens soon joined as they fought for the legally mandated sick pay Amazon denied its New York workers. After going public the different locals connected through Zoom and phone calls, developing the foundations for the Amazonians United movement.

Amazonians United believes workers in organization together will always be the primary source of power to drive change, because we do all the work that makes Amazon and the economy run. We are for building deep organizations where coworkers democratically assess their own issues, determine a strategy together, and, most importantly, build the power in our workplaces necessary to win these changes.

We believe our victories thus far demonstrate this power. Amazonian United locals have won changes to workplace conditions such as more water stations, back pay for shifts terminated prematurely by management, the rehiring of workers unjustly fired, paid-time off for all Amazon workers, and in New York, enforcement of the legal right of workers to sick pay.

Our experience organizing in a number of the company’s warehouses over the past couple of years provides examples about how to build up strong committees of workers and be ready for the most severe forms of retaliation. This model charts a promising path forward for long-term organizing at Amazon rather than the recent media stunts.

On March 18, as the coronavirus pandemic started to inundate New York City, workers at the DBK1 delivery center in Queens heard of the first positive case in their warehouse. Managers, seeking to keep production running, refused to notify the majority of workers. Instead, they informally notified a small group. Some of these workers immediately informed the newly forming Amazonians United organizing committee.

Before the pandemic, a team of coworkers had built unity through a petition to address collective problems such as paid time off and sick pay, in a facility where workers are mostly part-time and received neither. This prior organization-building enabled the organizing committee to take action prior to their night shift.

They told coworkers in the break room of the positive ID, formed an impromptu picket outside the building’s entrance, and directly confronted two building supervisors. They refused to work in unsafe conditions where the virus could quickly spread, demanding instead to be sent home with pay while the facility followed appropriate sanitation measures.

Their quick determination to take collective action put management on the defensive, and they successfully won both demands. Night shift workers were sent home with pay as the building was sanitized.

After learning management still hadn’t informed the morning shift scheduled for the next day, workers with Amazonians United showed up again at the warehouse to inform their coworkers and again staged a walkout that shut the warehouse down. These actions built support and legitimacy among coworkers, and brought new members into the organizing committee.

FROM LOCAL FIGHT TO INTERNATIONAL MOVEMENT

The next day the Amazonians United group launched one of the first worker petitions of the COVID-19 crisis, an international petition under the slogan “We Keep Us Safe.” They demanded personal protective equipment (PPE), hazard pay, childcare support, and sick pay for all Amazon workers who fell ill—positive test or not.

The demands were widely felt. The petition connected with Amazon workers across the world, who even prior to the crisis acknowledged that Amazon did not value their lives, instead treating people like disposable robots. By mid-April over 5,000 workers had signed the petition. Workers across the network refused to show up to work, taking unpaid time off instead. Others continued to work, putting their safety and lives at risk.

The petition articulated the anger of many, but worker-leaders realized that to win protections, they needed to escalate. Organized and spontaneous walkouts emerged across the network. In Chicago, DCH1 Amazonians United organized several strikes with participation from the majority of a shift. They worked in conjunction with community supporters to demand that Amazon “shut it down, clean it up.” The DCH1 organizing committee was able to stage these strikes because they had built solidarity, trust, and collective action over the previous year, taking on several fights to improve workplace conditions. With each subsequent fight, they grew in number and boldness.

In centers where Amazonians United locals have grown and strengthened over the past year, harassment, intimidation, and enforcement of infractions have also escalated. But despite frequent pickets, collective confrontations with management, and strike actions, management has been very cautious about firing workers at these centers.

When management struck back in Chicago, DCH1 Amazonians United filed seven unfair labor practice (ULP) claims and started an anti-retaliation petition. When management claims such demands come from an outside organization, those allegations fall flat. Worker-leaders are safer when management knows that firing them can lead to coordinated escalated actions.

And we know we can’t do it on our own. Amazonians United organizers are fighting in solidarity with other workers facing retaliation. Recently we participated in a live-streamed sick-out organized by fired members of Amazon Employees for Climate Justice, which gave headquarters tech workers the chance to hear directly about conditions in the warehouses. Actions like these moved even a vice president, one of 20 “Distinguished Engineers” in the entire company, to resign in solidarity.

We are also working alongside Amazon workers in other countries under the banner Amazon Workers International (AWI). In light of the retaliations, AWI published an open letter to Jeff Bezos in six languages and a comic strip in nine, while German shop stewards began a campaign for freedom of speech on the job, echoing a slogan from the tech workers, “Stop firing, start listening.”

Based on these experiences, we would point to the following lessons as more Amazon warehouse workers begin organizing for protections.

Use the petition to build your organization by asking if people are willing to take action with you. Set goals for signatures. When you hit your goal, deliver your petition to management as a crew.

We prefer delivering the petitions during “stand-up,” the pre-shift meetings led by management. This allows you to issue demands directly to management in front of your coworkers. Managers may demand you to speak to them one at a time, to sow division. Stand strong as a group. This demonstrates unity, and that when one person speaks, they speak for an organized group.

Sometimes we may have the urge to speak out individually or lead an action as a courageous leader; this makes it easier for management to isolate leaders and fire them, leading to an organization without a head.

As you build your organization, you can also use legal strategies to defend yourself, including unfair labor practices. Bosses are used to being dictators; when we assert our rights, we challenge the undemocratic order they uphold. Reach out to Amazonians United and we can coach you.

By following the steps above, Amazon workers can act on the principle that a harm to one is a harm to all.

Remember this crucial fact: a union is nothing more than you and your coworkers coming together to make change. By building the union together with our coworkers, we aim to have control over our organization, our workplaces, and our lives, ensuring a future where we are respected as people and thrive together. Amazon bosses will do everything in their power to keep us separated and feeling powerless. But together we keep us safe.

This work is not easy, but it’s worth it to stand up for what’s right. Amazonians United organizers are here to coach you and your coworkers. Reach out via email at amazoniansunited[at]gmail[dot]com, through filling out this form, or on Facebook, and join the movement!

Related
How My Co-Workers Got Me Reinstated at Amazon's San Bernardino Air Hub »
Global Actions on Black Friday Unite Workers to ‘Make Amazon Pay’ »
Viewpoints: How Academic Workers’ Leverage Can Grow in a Long-Haul Strike »
Every Union Contract Right Now Should Be the Best Ever »
Could We See a Rail Strike? »