Will COVID-19 Be Our Triangle Fire? 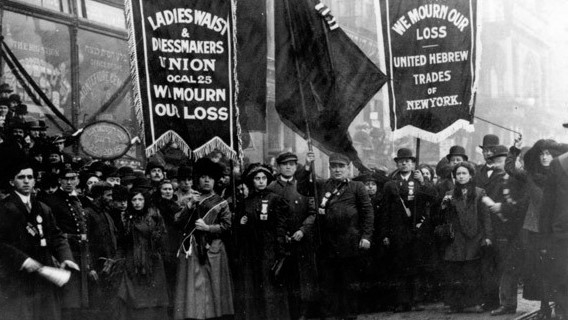 The world is in the grips of a horrible pandemic that will touch us all. But as has almost always been the case, the burden of COVID-19 will disproportionately fall on marginalized and working people. In New York, now the epicenter of the U.S. crisis, we watch as the crisis pushes the stories of previously invisible workers—the grocery store clerks and delivery persons, transit workers and hospital orderlies—squarely into the public conversation.

Hearing stories of workers’ deaths and illnesses, it is easy to fall into despair. But if history teaches us anything, it is that this crisis also presents an opportunity.

One hundred nine years ago, on March 25, 1911, 146 workers—mostly young immigrant women—were killed when a fire broke out on the ninth floor of the Triangle Shirtwaist Factory in New York. Many of the workers were burned alive, blocked from safety by exit doors locked by the owners to prevent theft of fabric; others chose to leap to their deaths rather than burn.

From the ashes of their horrific, preventable deaths, movements rose to challenge the structures of power that made working people invisible and expendable.

Will COVID-19 be a similar “trigger event” that changes how we, as a country, treat working people? Could lasting, positive change rise from the ashes of this pandemic? If history is our guide, we are in for a hell of a fight.

Already, weeks into the pandemic, there is a newfound recognition of who is “essential” in our society and economy. Unfortunately, these newly recognized essential workers are bearing the brunt of working in this crisis.

In New York City, Stephen Jozef, an electrician working on a Google office building, became the first construction worker to die, before workers demanded a stop to construction of high-rises and luxury apartments. The following day, Kious Kelly, a nurse at Mt. Sinai hospital where workers had worn garbage bags as personal protective equipment (PPE), became the first New York nurse to die from the disease.

As of this week, eight members of Transport Workers Union Local 100 have died. More than 330 Transit Authority workers have tested positive, with 2,700 ordered to quarantine at home. This was after management had refused for weeks to give workers masks.

For the newly “essential” food service and grocery industries, the lack of protections is a crisis for both workers and the public. Prior to COVID-19, only 25 percent of food service workers received paid sick days. “The Centers for Disease Control and Prevention reported in 2014 that fully 20 percent of food service workers had come to work at least once in the previous year 'while sick with vomiting or diarrhea,’” the New York Times wrote in an editorial (“The Companies Putting Profits Ahead of Public Health”).

FROM THE ASHES OF THE FIRE

The tragic deaths of frontline workers from COVID-19 need not be in vain. The Triangle Fire became a turning point in the history of working people and the U.S. labor movement.

Coming out of the fire, working people won some of the country’s first laws mandating fire safety practices and improved building codes, regulating working conditions, improving sanitary facilities, encouraging collective bargaining, and limiting the hours of work for women and children. The seeds of everything from minimum wages to workers compensation to the Occupational Safety and Health Administration came out of the post-Triangle push for reforms.

Frances Perkins, who witnessed the fire and later became Secretary of Labor under FDR, famously described the Triangle fire as “the day the New Deal was born.”

The story of Triangle is one of worker power and union struggles, of organizing and movements that made a tragedy a catalyst, not just a headline.

Two years before the fire, 20,000 immigrant women shirtwaist workers—including those from the Triangle factory—struck to demand safer workplaces and union recognition with the International Ladies Garment Workers (ILGWU). Thousands of workers won recognition and crucial safety protections—but not the Triangle workers. As former Labor Secretary Hilda Solis said on the 100th anniversary of the fire, “If these workers had a voice—a union—and the ability to speak up about conditions, these events probably could have been prevented.... They had tried to organize and faced virulent opposition.”

In the days after the fire, hundreds of thousands of New Yorkers lined the streets of New York for a funeral march organized by the ILGWU. The revitalized labor movement in New York and nationwide led the calls for accountability and reform and kept relentless pressure on the city and state for years.

The credit for the major reforms often centers on individuals like Perkins, Senator Robert Wagner, and FDR. But without the organizing and strikes of hundreds of thousands of workers, the “virulent opposition” likely would have succeeded in blocking meaningful reform. The post-fire period saw a massive increase in the numbers of workers joining and forming unions and taking major public, disruptive actions. It took a movement to turn tragedy into lasting change.

Will this crisis trigger a new wave of building power and transform the public conception of basic protections and rights? We are already seeing the seeds of change. Much like textile workers before them, workers are organizing in industry after industry for mutual aid and action. Pittsburgh sanitation workers pulled a wildcat strike for PPE and additional pay. Amazon, Whole Foods, and Instacart workers struck for paid leave, safer conditions, and health care for part-time employees. Chipotle workers walked out demanding sick leave and better sanitation. General Electric workers are protesting to demand their factories be used to build ventilators.

As a recent Whole Foods strike leader shared hopefully, “There’s been an incredible little strike wave this week, and I would like to see all these disparate movements come together, because there’s a lot of overlap in what we’re asking for.”

There is a chance that the COVID-19 crisis will be a “trigger event”—that the horror of working poor people and immigrants risking their lives—and dying—to keep us fed and cared for will be viewed with the same horror as were those 146 workers' deaths for the Triangle owner’s profits. That being forced to work while sick will become as shocking as women and children working around the clock behind locked doors in factories. That working without health care and protective equipment will lead to the creation of new forms of oversight by government and community. That previously invisible immigrant workers will continue to be treated as essential.

But as always, the other side—the bosses, the owners of capital—will be fighting to make things worse for working people.

The White House is already using coronavirus response to push through viciously anti-union rules, impose tougher border control, and roll back food safety inspections and environmental regulations. Bosses are pushing to rip up contracts, cut wages and pension obligations, and walk back regulations and oversight in industries far and wide.

But, like working people a hundred years ago, the power of our movements gives us a fighting chance to turn this tragedy, too, into lasting change. It’s an opening we have to take.

David Unger is an educator at the School for Labor and Urban Studies, City University of New York, and a member of the Professional Staff Congress-CUNY/AFT.