‘We Believe in Ferries’: Alaskan Ferry Workers Walk Off the Job 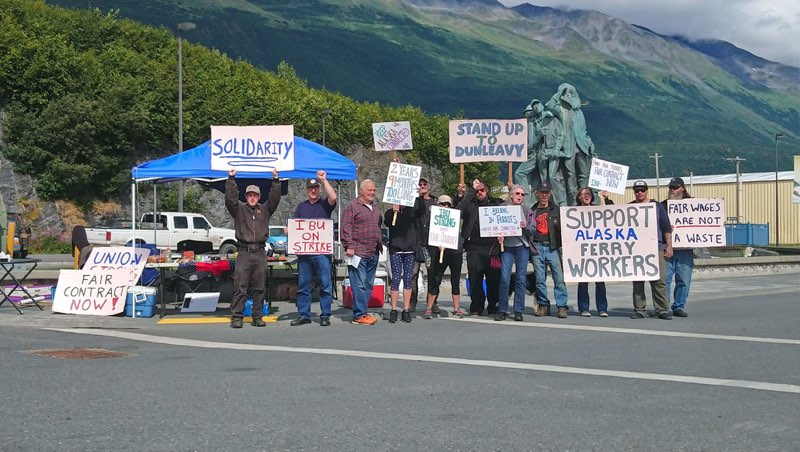 Cooks, deckhands, engine workers, and pursers set up picket lines July 24 in ports like Valdez. Many coastal communities rely on the public ferry system, sometimes the only way to transport people and supplies in and out of a town. The governor wants to slash ferry service. Photo: IBU

UPDATE, August 6—The ferry strike is over. The IBU reached a tentative agreement on the ninth day of the strike, and members voted 248-19 to ratify it on the 10th day. All told, the ferry system was shut down for 11 days. An IBU official told Alaska Public Media that the new contract included the cost-of-living increases that the union had demanded, but also included health care concessions, though not as severe as the state's "final" offer.

Four hundred workers who operate the 13 ferries in coastal communities along the Gulf of Alaska walked off the job on July 24, shutting down a key transportation network during peak season.

Members of the Inlandboatmen’s Union (IBU), including cooks, deckhands, engine workers, and pursers, tied up their ships in harbor and set up picket lines in ports like Ketichikan, Juneau, Kodiak, and Valdez. Some carried homemade signs with the IBU logo and the slogan, “We Believe in Ferries.”

The strike completely shut down the system within 24 hours, as ships arrived in port. The state has already had to pay upwards of $2 million in refunds to people who are unable to use their tickets.

Some members of the unions that aren’t on strike—the Masters, Mates, and Pilots and the Marine Engineers Beneficial Association—are onboard the ferries, supposedly ready to go at any time if a crew assembles.

Supervisors have been trying to pressure individual strikers to sign a paper saying they’ll resume work, sometimes claiming there’s a full crew of picket line crossers on the ship already. But the strikers have been able to call their allies in the other unions and get firsthand reassurance that’s a lie.

Ferry workers stress that their strike is over their contract, not the cuts to the system. But the strike comes in the middle of a crisis over the future of Alaskan ferries.

The workers are facing huge budget cuts—set to lay off half of them and eliminate winter ferry service to many communities—and threats that the whole system will be privatized.

With routes running from the Aleutian Islands to the city of Prince Rupert, in Canada’s British Columbia, and south to Bellingham, Washington, the ferry system is an artery for commerce in communities that have limited or no other transit options.

Many towns are completely inaccessible by road—leaving only ferries, industrial barges, and planes. Plane travel is more expensive, and not an option for transporting many goods and personal vehicles.

“I grew up in Kodiak,” says Krisell Calibo, an IBU patrolman who has worked on the ferry system since 2006. “The flight service there was never consistent and never dependable. If we needed to go off the island, we took the ferry.”

“We’re an extension of the toll road,” said Robb Arnold, a purser on the Malaspina ferry and executive board member of the IBU, the largest union in the ferry system. (Pursers are responsible for the money onboard the ship.)

“All along the way we transport goods, we bring fresh produce, construction equipment, tourists with R.V.s. We’re an integral part of this whole Alaskan system, this public service.”

Alaska’s budget relies heavily on oil revenues. The state has no individual income or sales tax.

A share of the taxes on oil and royalties from extraction on public land is distributed to state residents through the Permanent Fund Dividend. Alaskans receive a flat sum of about $1,600 per resident each year.

Governor Michael Dunleavy, who took office last December, campaigned on doubling the PFD to $3,000 per year, while also not raising taxes. The state will forgo an estimated $1.2 billion from oil taxes through a tax credit to oil companies.

Dunleavy proposed to cut funding for the AMHS by $96 million, or 75 percent. This would have shut down the system entirely from October through the spring. There’s less tourist traffic during those months, but if anything the ferry becomes more important, since planes are harder to run in the winter.

The state legislature ended up “compromising” by cutting service by $46 million. Some communities will see no off-season service, and others will see their frequency of service cut significantly.

This wasn’t the first round of cuts. The ferry system is receiving about a third of the funding it relied on a few years ago.

AMHS service also faces the specter of privatization. A report prepared by a group of business interests—including marine shipping companies and chambers of commerce—advocated for privatizing the whole system, while simultaneously making the case that the service is essential.

Segments of the state’s elected leaders seem to be taking the bait. “We think it’s a viable public system,” Arnold said of the ferries, but “this administration’s view is that Alaska is for sale.”

The IBU contract has been expired for three years. Wages have been frozen for five years. The union’s 430 members at AMHS walked out after lengthy negotiations and mediation.

Negotiations were stalled with the state demanding that workers take a net pay cut by paying an increased share of their health care costs. The raises offered wouldn’t have come close to covering the difference.

The union also wanted seniority-based wage increases. Right now, members only get raises when the union negotiates a cost-of-living bump. The state balked, saying it would need seven months to perform a wage study, and proposed three years of zeroes for cost-of-living increases.

When the Dunleavy administration took over, negotiations took a turn for the worse. “They weren’t willing to honor any of the rules we agreed to,” Calibo said. “It was like two steps back, and then some.”

Public employees in Alaska already lost pensions in 2006 when the state legislature moved from a defined benefit plan to a defined contribution plan similar to a 401(k). The state doesn’t contribute to Social Security for its employees.

The picket lines span a distance of around 1,000 miles along the system’s routes, from Kodiak to Ketchikan. Some IBU and Longshore (ILWU) members have also picketed ports in Washington state in solidarity. The IBU is a division of the ILWU.

IBU members stay in touch with union officers and one another through emails and a network of text and phone trees.

Before the strike, IBU members built up public support with a “Save Our System” (SOS) campaign against the governor’s cuts to the ferry system. Members asked local residents to sign a petition for full funding; they collected 800 signatures.

A delegation of ferry workers and community supporters delivered those petitions to the state capitol during two days of statewide actions under the SOS banner. When the state held a time for the public to call in with testimonials, supporters flooded the lines.

“There were a record number of people who called in to speak,” said Calibo. “There were so many people that they had to cut the time for each person, and add an extra day.”

When the ferry workers went out on strike, their allies stuck with them. “We have members on strike from all over Alaska,” said Joel Ably, a deckhand and IBU executive board member. “They didn’t necessarily have the choice to go home immediately—they were where their ships stopped. The community has taken us in, housed us, fed us. The support has been great.”

The strike has also helped strengthen the union. “When you don’t have anything you’re fighting against, any conflict with the employer, it’s easy for people to not understand what the union’s for,” said Calibo. “It’s fights like these that show why solidarity is important.”