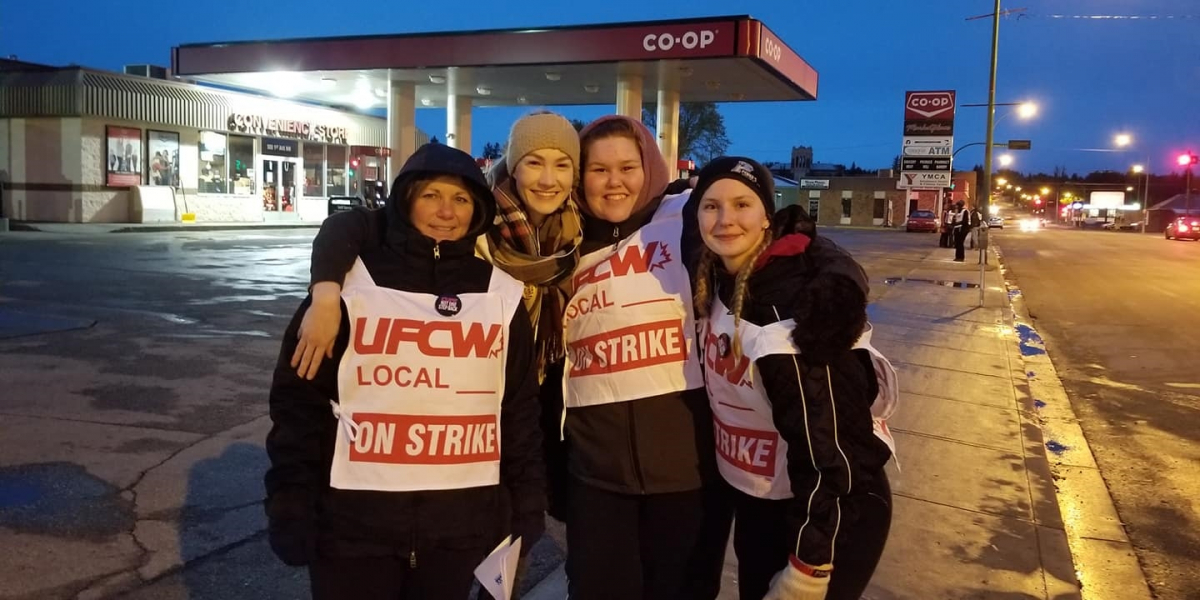 Another Canadian province, Quebec, has made two-tier wages, benefits, and pensions illegal. Some lawmakers who marched with the Saskatoon Co-op strikers want to do the same in Saskatchewan. Photo: UFCW Local 1400

“Three years ago I was at a union meeting and a member stood up and asked why we got such good pay and benefits as Saskatoon Co-op employees,” said Jodi Smith, a member of Food and Commercial Workers (UFCW) Local 1400.

“Grant Wicks, now the general manager of the co-op, answered that the employees were worth it—they were trained well, customer service was excellent. We all left this meeting with tears in our eyes, feeling appreciated.”

Fast forward to this year, when 900 Saskatoon Co-op workers spent five and a half months on strike, shutting down gas stations, hardware stores, and grocery stores in the Canadian province of Saskatchewan.

Originally developed out of a cooperative union of farmers, Saskatoon Co-op used to offer competitive wages and a generous benefit plan. And for a long time the values of the cooperative lent themselves to favorable working conditions. Workers could start at a gas pump and work their way up to an office job. The co-op offered pensions and maintained a higher percentage of full-timers than most retail jobs. The longest that bargaining had ever taken was three months.

This time was different. The contract expired in November 2016, but for the first time, the employer delayed negotiations. When bargaining finally began in February 2017, the union realized it was in for a fight.

Management was seeking big concessions. It wanted to cut pay, reduce vacation time and sick leave, and shift benefit costs to the employees.

But the union believed all those proposals were smoke and mirrors for the biggest concession: two-tier pay. The employer wanted to create a new schedule for new hires. It would take them longer to get to the top pay rate, and they would top out at almost $5 an hour (Canadian) less than current employees.

UFCW chose to invoke a provincial law that allows a third-party mediator to come in once bargaining reached an impasse.

However, Saskatchewan’s labor laws have been eroded in recent years under a conservative government. The new law says a labor dispute can’t be pursued as long as there is an issue pending between the union and the company. This means the employer can file a frivolous claim to prevent workers from going on strike.

In this case, the company used an application that Local 1400 had filed with the labor board asserting that workers at a Safeway grocery store bought by Saskatoon Co-op should be represented by the UFCW. The workers had previously been members of another union.

In November 2017, 90 percent of members voted to strike. But they couldn’t hit the picket line because of the pending representation issue that the employer had submitted. Even though it was an issue between two unions, the employer was able to weaponize it as a stalling tactic.

Although employees were shocked by the Co-op’s proposals, they were also prepared. A year before the contract expired, the union had started holding conference calls with representatives elected by their co-workers in each location.

Over the next few months, the employer was unwilling to bargain and there were no regular bargaining dates. After the union and the company eventually made their way back to the table in the spring of 2018, workers voted to reject the employer’s offer.

Finally last October there were no more pending issues in front of the board, so the union was able to give a 48-hour strike notice. The workers walked.

Picket captains and shop stewards took ownership of their own lines. They met at the local office once a week, and used secret Facebook groups to stay in touch.

Local 1400’s four staffers were all out on the lines too, although the union also represents other grocery workers, hotel workers, and security workers. UFCW Canada sent additional staffers to help out on the lines and in the office. There was also a lot of cross-union solidarity from the Public Employees (CUPE), the Service Employees (SEIU), the Teamsters, and the Saskatchewan Government and General Employees’ Union.

Winter arrived. Five hundred and fifty people walked the line in freezing temperatures; 30 percent of those workers were over 65.

It took weeks for the workers to get traction with the community. “When we first started, the postal workers were on strike, and everyone was driving by thinking we were postal workers,” said Smith, a payroll administrator at the co-op. “The union had to mobilize and get flags and banners for more visibility.” The UFCW also put up electronic billboards in the downtown area and along freeways calling for a boycott.

Ultimately the support from the community was overwhelming. By December, community members were dropping off food every day. Co-op members started a petition urging the board of directors to come to the table.

Store parking lots were visibly empty. Union members from Unifor Local 597 and the Teamsters local at the company’s warehouses and refineries reported that the demand for supplies had dwindled significantly.

The workers were getting angrier and more motivated by the day. “Grant Wicks was printing out his version of bargaining updates and giving them to security guards to distribute to the strikers,” Smith said. “Every time he lies, you can feel the energy on the line increase.”

HELD OUT ON TWO-TIER

Just after Christmas, Saskatoon Co-op made another offer with no negotiation. The company had amended its proposal to decrease the pay gap between the tiers, but only slightly.

Two-tier was the reason the workers had decided to walk in the first place. And the offer still didn’t include a bridge for workers to move back onto the first tier.

Originally the UFCW was negotiating for a bridge that would allow workers who had exemplary customer service metrics to move to the first tier after four years. The workers saw the bridge as a compromise.

The employer’s prevailing argument was that the UFCW had bargained two-tier for workers before in other contracts. “We don’t care,” Smith said. “We are our own group of people, at our own point in time in history, and we don’t want this. And we are willing to fight, as long as we have to, to make that a reality.”

The New Democratic Party got involved with the strike. Members of Parliament walked the picket line with striking workers. Another Canadian province, Quebec, has made two-tier wages, benefits, and pensions illegal. The lawmakers said that they would like to pass similar legislation in Saskatchewan.

In January, members voted by 60 percent to reject the company’s offer. “I’ve found a family through a strike, and we will stay out to keep from going backwards in wages and working conditions,” Smith said at the time.

But after three more months on the lines, the parties finally reached a tentative agreement in April. A few days later, members ratified the new, seven-year contract by a narrow vote of 274-230.

That’s seven years beginning in 2016 when the last contract expired. Workers will get back pay for three missed raises.

The workers did not defeat two-tier; they accepted the same big pay gap they had rejected before.

The union managed to minimize the impact on starting pay, but the gap widens over time. A newly hired clerk cashier, for instance, will make $12.07 (Canadian) an hour—slightly less than the starting rate under the old contract, $12.56.

New hires who make it to the top rate on the second tier will be eligible for an annual bonus, though that’s dependent on the Co-op’s profitability.

“I walked for two-tier, so even though my knees are bad and I’m tired, I voted no,” said Smith. “But we fought through a long, hard winter and we are proud of the movement that we have forced the company to make. I am most proud of the community and the Co-op members for standing with us.”

The new agreement increased the night shift premium from 70 cents to 85 cents. The premium for employees who are required to carry a cell phone outside of work hours increased from $14 to $20 a day. The contract also limited the number of self-scan checkouts at each location.

The union has now formed a committee to try to recruit progressive board members at the Co-op.

Bianca Cunningham is a staff writer and organizer at Labor Notes.bianca@labornotes.org
Related
This Year I’m Thankful for the Revolt Against Two-Tier »
'We'll Never Be in This Position Again': Striking Deere Workers Hold Out for Better Deal »
Teachers Strike against a ‘Heartless’ School Board in Biden’s Hometown »
Viewpoint: Building Trade Unions Won’t Win Our Parking Fights Until We Catch the Striketober Spirit »
‘It Feels Like We Started a Movement’: Despite Mixed Results in Frito-Lay Strike, Workers Proud They Stood Up »