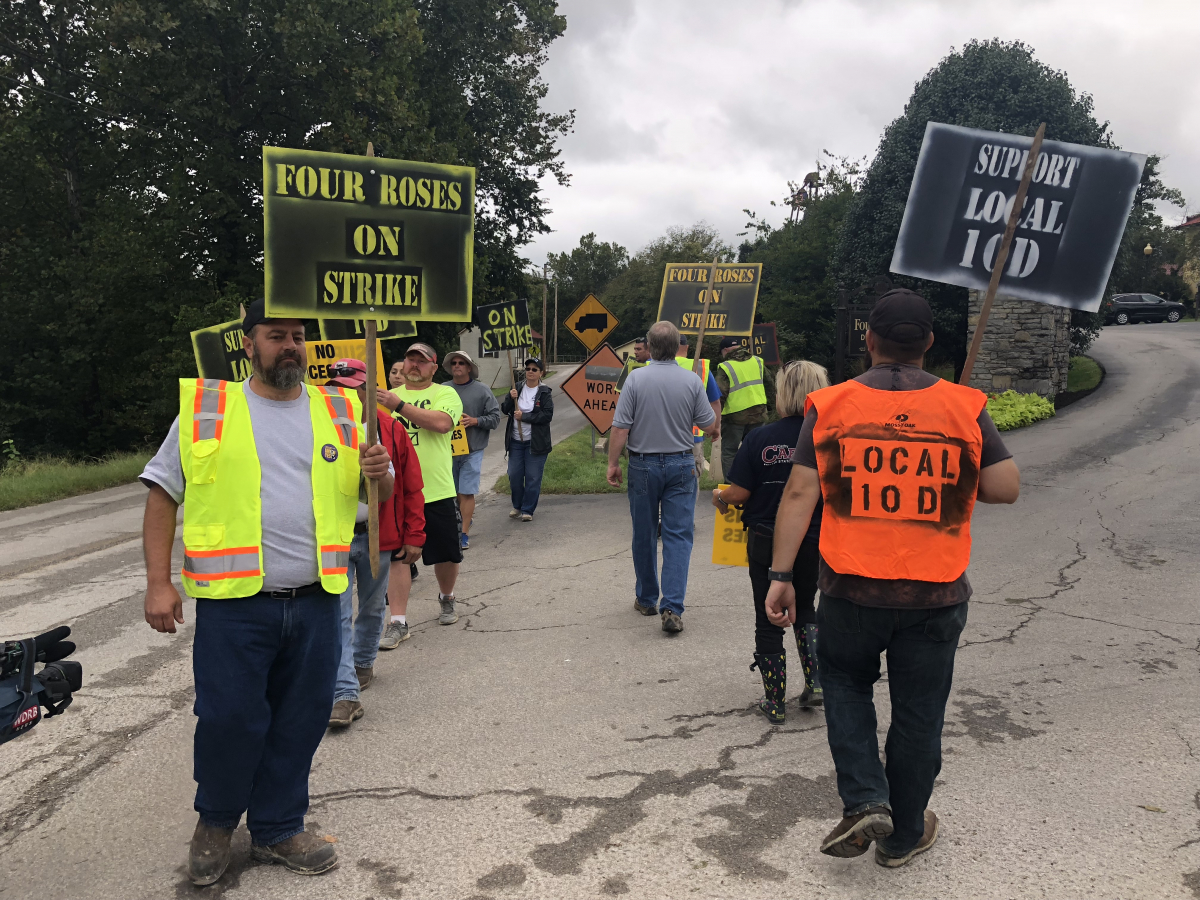 The bourbon industry is making plenty of money, and after workers at the nearby Jim Beam distillery fought off two-tier, Four Roses workers had confidence they could do it too. Photo: Richard Becker.

Just as their industry was preparing to welcome thousands of visitors for September’s Kentucky Bourbon Festival, they walked out on strike—in defense of workers they hadn’t even met yet.

“This is a family company,” said Matt Stone, a leader in Food and Commercial Workers (UFCW) Local 10D. “Grandfathers, fathers, sons all work here for generations, and my family may be working here one day. We want to take care of the next guy.”

With few resources at their disposal, these 50 workers in rural Kentucky stared down the Japanese conglomerate Kirin Brewery, which owns Four Roses, and won.

‘TAKE CARE OF THE NEXT GUY’

The dispute was over a two-tier contract proposal that would have given worse benefits to new hires.

One fact Four Roses hadn’t counted on was that many of its employees had friends who worked at the nearby Jim Beam distillery. Two years ago, Jim Beam workers struck over a similar issue and forced their employer to back off.

The Four Roses workers, represented by UFCW Locals 10D and 23D and the National Conference of Firemen & Oilers (SEIU), spent nearly two weeks walking the picket lines near the distillery in Lawrenceburg and outside the bottling and warehouse facility in Coxs Creek.

When they returned to the bargaining table with the assistance of a federal mediator, within hours they had a tentative agreement—and in the words of Local 10D President Jeff Royalty, “There is no two-tier in Lawrenceburg, Kentucky!”

Precisely what caused the company to back down remains somewhat of a mystery, even to the workers involved. What is clear is that their public campaign—direct outreach to would-be customers, support from the local community, solidarity from other unions, and outreach to the media—helped turn the tide.

The workers also had a strategic analysis of their situation. A global boom in the bourbon industry gave them leverage. After all, bourbon-making is a long process. Since the raw product must age in barrels for years before it can be sold, any production time lost would affect revenue years down the road.

Further, the industry’s record profits completely undermined any justification for concessions. Workers knew Kirin could afford to do better.

Finally, the strikers had the support of the largely union workforce doing construction on the property. The day the strike began, the construction workers packed up their tools and left, refusing to work during the strike.

The Four Roses strike was organized, managed, and staffed almost exclusively by rank-and-file members, not officers or staff. Workers made their own signs, handled all media interviews, and organized picket line shifts.

“You’ve gotta do what you gotta do,” said Jeff Scott, a boiler operator at the distillery. “You can’t wait for other people to step up. We probably put in more hours working the picket line than we would’ve if we’d been working.”

The workers organized parking near the distillery for picketers, secured outdoor bathroom facilities, and maintained a round-the-clock presence at both plants to monitor for any signs of the company bringing in replacement workers.

As it turned out, the company never did bring in replacements. But rumors that they were gearing up for it added a sense of urgency to the workers’ actions.

Conveniently for the strikers, the annual Kentucky Bourbon Festival gave workers what Scott called “our best chance to put public pressure on the company.”

Workers and supporters descended on the event to leaflet festival-goers. “I think it was a black eye for the company,” Scott said.

Those on the picket line also talked constantly to tourists who were hoping to visit Four Roses. Time and again, the visitors turned around. One retired union railroader from Missouri told the workers he wouldn’t cross the picket line for anything.

Late in week two, workers drove to Louisville to leaflet in front of a restaurant where Four Roses was co-hosting a special event. The Fairness Campaign, a local LGBTQ rights organization, happened to have an office next door, which it lent as a base of operations—offering its bathrooms and copy machine.

Two-tier contracts are bad for solidarity. They spark resentment and erode a union’s position among newer workers, especially in a “right-to-work” state like Kentucky, where union membership is voluntary.

“Why should I support the union,” new workers may ask, “if the union sold me out before I even showed up?”

To get two-tier contracts past current members, employers count on short-term self-interest. Four Roses, which was offering unusually large signing bonuses, claimed implausibly that the new system would be better for current workers and provide more flexibility and choice to new workers.

The company continuously reminded workers that the proposed changes would apply only to new hires. But the workers didn’t budge.

Driving along the narrow country road that leads to the distillery, you could see hand-painted signs expressing support for the strikers displayed in yard after yard. Every day community members brought bottled water, soft drinks, snacks, and meals for the picketers.

When politicians and elected officials stopped by the picket line, workers posted photos on Twitter and Facebook.

Members of Teamsters Local 89 were among the supporters who spent many days on the picket line. Even Local 89 President Fred Zuckerman—a national figure who nearly unseated Teamsters President James Hoffa in the union’s last election—showed up, driving a truck emblazoned with the Teamsters logo.

Several weeks after their victory, workers from Four Roses hit the road for Louisville again—this time to join someone else’s picket line. Teamsters Local 89 now had a strike of its own at Allied Ready-Mix.

I asked Jeff Scott that day what he had learned from the experience of striking.

“I’ve worked [at Four Roses] for 16 years, and that was my first time really getting involved,” he said, picket sign in hand. “To be honest with you, I feel like I’ve found my calling.

“You may think you’re on your own, but you’re not. People have your back that you don’t even know. That’s why I’m here [in Louisville] today.”

Richard Becker is an organizer with the National Conference of Firemen and Oilers, SEIU 32BJ, based in Louisville.

A version of this article appeared in Labor Notes # 478, January 2019. Don't miss an issue, subscribe today.
Related
‘We’re Sick of Giving Away Our Future’: An Interview with Kellogg Strike Leaders »
Volvo Workers in Virginia Vote Down Bad Contract by 90 Percent—Again »
The Grocery Companies Denied Us Hazard Pay—So We Went Over Their Heads »
Global Cleaning Workers Share Their Struggles as the First Line of Pandemic Defense »
Chicago Health Care Workers on Strike for Safe Staffing, $15 Minimum, PPE »