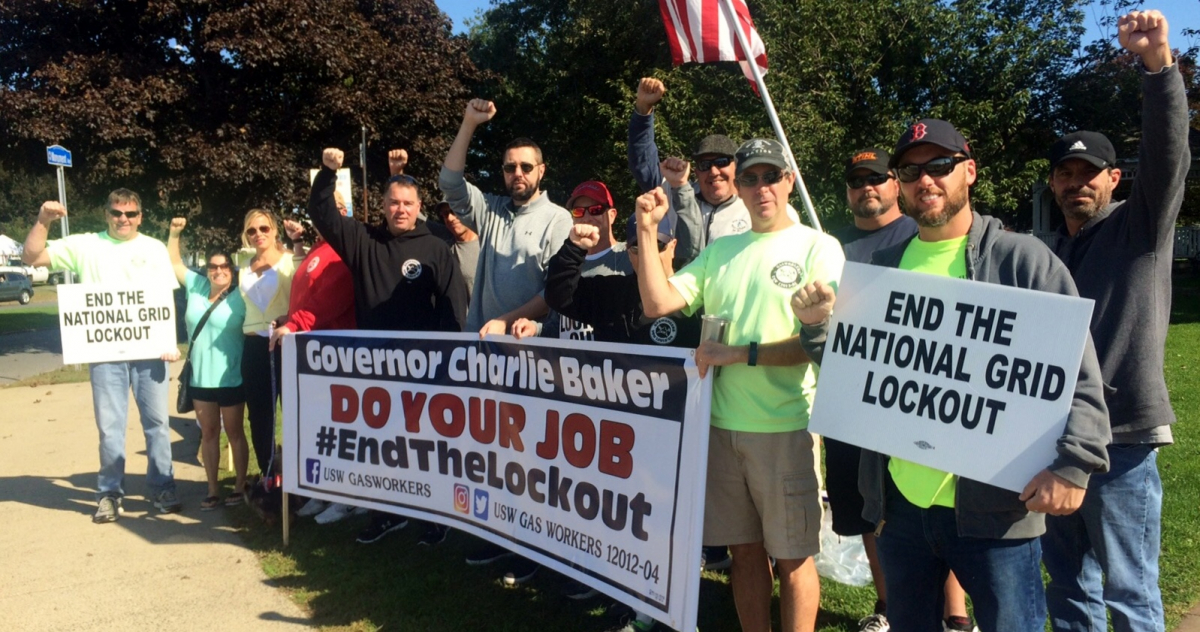 National Grid workers are holding out to maintain the pension for future hires they haven’t even met yet. Photo: Joe Ramsey

There’s a reason his employer wants to eliminate pensions for new hires, said corrosion technician Andy Colleran: “National Grid is trying to break the union from within.”

Colleran is one of 1,200 members of Steelworkers Locals 12003 and 12012 in Massachusetts who have been locked out since June, after the unions refused a two-tier contract.

Under the company’s proposal, new hires would no longer get a defined-benefit pension, and would have their sick and vacation time reduced. For retirees, co-pays and deductibles would go up.

“The package for the current people in the local was reasonable,” said Local 12003 President Joe Kirylo. But “the people in this local chose to defend the next generation. This is the straw that broke the camel’s back.”

Ninety-five percent of members voted down the company’s final offer. Since the June 25 lockout, workers have been picketing, rallying, and following scab workers to track safety violations.

Colleran and his co-workers are taking a stand for future hires they haven’t even met yet.

“People did it for us,” said Jim, another veteran employee we met on the picket line who didn’t give his last name. “Why shouldn’t we do it for others?

Some other National Grid locals have accepted the two-tier offers. But John Buonopane, Local 12012 president, believes that’s a mistake.

“New employees are pissed off at not having a pension,” he said, and that changes how they see the union: “When they realize that their fellow workers and union didn’t fight for their rights, are they going to have that solidarity?”

As more and more new workers come along, Buonopane pointed out, eventually the older workers will be the minority. Then the company can come after them too.

National Grid profits have been hitting record heights—$3.66 billion for fiscal year 2018, up 24 percent from a year ago. “Their top executives just took home $35 million in bonuses,” said Jerry Murphy, who has put in 35 years. “We just want to be treated fair.”

On July 1, six days after the lockout started, National Grid cut off the health insurance of locked-out workers, immediately putting workers and their families at risk, especially those with chronic conditions.

Eric Doren has worked for 15 years in National Grid’s street department, responsible for installing, maintaining, and repairing gas lines in the system. Locked out, he’s now paying $2,600 per month to keep his family’s health insurance through COBRA.

He has bone-marrow problems that require hospital visits, a wife suffering from stage 1 muscular sclerosis, and twin daughters. “It’s frustrating to be a father and not be able to support your family,” Doren said. “I’m a family man. But the company cuts the support from under you. They don’t care.”

Doren isn’t even receiving unemployment, since the lockout began while he was on temporary sick leave for an injured ankle. Massachusetts provides unemployment insurance to locked-out workers for up to 30 weeks, though it only pays about half of what workers were making. The National Grid workers have already used up 16 weeks.

We met Doren and others on the picket line, steps away from the Swampscott waterfront and just down the street from the million-dollar estate of Massachusetts Governor Charlie Baker. Their demand for Baker, emblazoned on giant banners: “Do your job.” The locked-out workers want Baker to order the Department of Public Utilities to address the hundreds of pages of safety concerns the union has delivered, and to increase the number of state safety inspectors.

The issue of safety violations gained new urgency on September 13, when more than 80 gas explosions rocked the city of Lawrence and towns of North Andover and Andover. The explosions killed one person, injured at least 20 others, and left thousands homeless or without heat headed into the cold months.

The explosions occurred on pipelines and connections overseen by Columbia Gas. Still, for communities in Massachusetts, the potential danger posed by scab labor and the lack of oversight became much more real. That has put new pressure on the governor to intervene and end the lockout.

Hundreds of locked-out National Grid workers volunteered to help with the Merrimack Valley repairs, but the company refused to end the lockout so they could provide their expertise. Nonetheless, dozens of the workers went up to Lawrence and did what they could to help, passing out water bottles to responders and cleaning up debris even in the pouring rain.

The USW locals have been raising the alarm about safety issues for years, including ongoing concerns about the number of inspectors on worksites. Since the lockout began, they’ve raised issues including failure to respond to a gas leak, leaving a manhole open overnight, and using a chainsaw where there was gas in the air.

They heard nothing back until the night of the explosions, says Kirlyo. That night, at 7:18 p.m.—three hours after the explosions—the local finally received an email from the DPU asking for a meeting.

On October 2, the DPU released a list of 29 alleged safety violations by National Grid since July 1, and gave National Grid 30 days to respond or face compliance violations and further investigations.

Six days later gas was shut off to hundreds of homes in Woburn, Massachusetts, when National Grid scabs accidentally increased the pressure in the gas line—the same issue that caused the Merrimack Valley explosions. In response, the DPU ordered National Grid to cease all work within its service areas, with the exception of emergency and compliance work, until the safety review is completed.

Doren said it’s dangerous to rely on inexperienced replacement workers. “It’s amazing that something hasn’t happened yet,” he said. “The company is playing a dangerous game for the sake of increasing profit margins.”

Barbara Madeloni is the Education Coordinator for Labor Notes. Joe Ramsey is a faculty member at the University of Massachusetts-Boston, and a member of the Faculty Staff Union (Massachusetts Teachers Association).