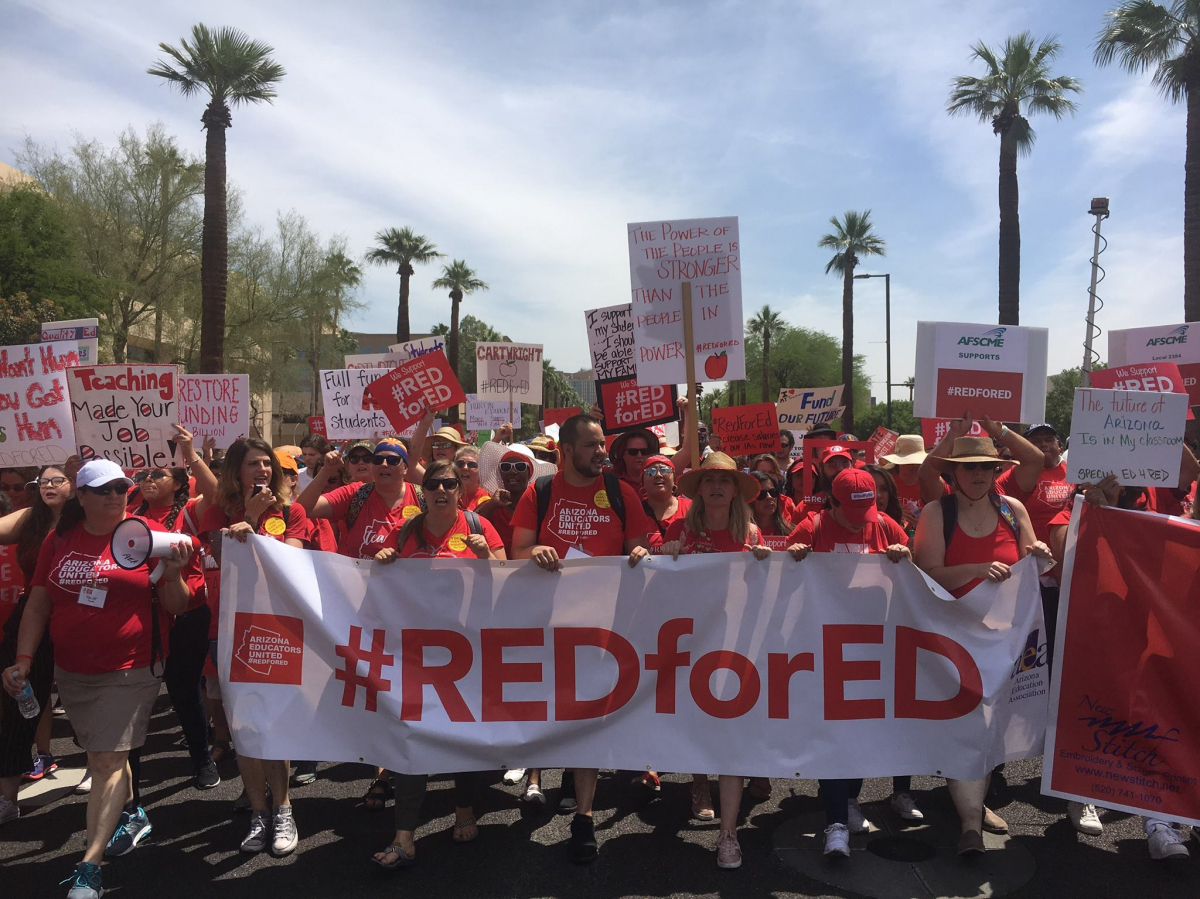 Seventy five thousand teachers and allies in red shirts flooded the streets of Phoenix as Arizona educators launched a statewide walkout on April 26 for increased school funding and raises for all school employees. Photo: Eric Blanc

Teachers Make Gains When They Make Trouble, by Samantha Winslow

Seventy-five thousand teachers and allies in red shirts flooded the streets of Phoenix as Arizona educators launched a statewide walkout on April 26 for increased school funding and raises for all school employees.

“You have West Virginia who stood up, you have Kentucky who’s standing up, you have Oklahoma,” said Brittani Karbginsky, a sixth grade teacher in Phoenix. “Now you have us.”

For months multimillionaire Governor Doug Ducey had been insisting he would follow this year’s meager 1 percent raise for teachers with another 1 percent next year. Under mounting pressure from the grassroots #RedforEd movement, on April 12 he announced that he would grant teachers a 20 percent raise by 2020.

Sounds like a win? Teachers weren’t buying it. Arizona Educators United, the statewide organization built over the last two months, pointed out that the raise was unaccounted for in the budget. They wanted a dedicated source of funding to make sure they won more than an empty promise.

AEU is also insisting that Ducey and the state legislature address its other demands, unveiled at a March 28 rally:

When the cost of living is factored in, Arizona’s teacher pay ranks last in the nation (in absolute dollars, Oklahoma ranks last). Average teacher salaries in Arizona have declined by nearly $9,000 since 2003.

Corporate tax cuts have drained $4 billion from the state coffers over the past decade; funding per student fell 14 percent.

So the escalation campaign continued, leading up to the walkouts that have closed schools in the state’s 30 largest districts.

Arizona teachers started their movement with a simple action: wearing “red for ed” every Wednesday. The idea popped up in a Twitter exchange between a teacher and the statewide union president, during the West Virginia strike.

“We had three days to organize it and we got thousands of pictures, from almost every school,” Karbginsky said.

In the weeks since, ever-growing swaths of the state have been blanketed in red. First it was red shirts—worn to school, to marches outside Ducey’s radio appearances, to rallies at the statehouse, and on weekend trips to grocery stores and soccer and baseball fields.

Red-clad teachers have held stand-outs along busy roads across the state. On one busy Tucson thoroughfare, high school teacher Jim Byrne reported, “every corner for about 10 miles there were red T-shirts and cars honking.”

But when red shirts weren’t enough, teachers organized to “paint the state.”

“Everyone kept saying, ‘We need a billboard,’” said Rebecca Garelli, a seventh-grade math and science teacher. “I’m like, ‘No we don’t. We all have mobile billboards’”—meaning cars.

“People just jumped on it, to the point where stores are sold out of red window markers out here.”

Teachers have also been holding morning walk-ins, where they rally and leaflet outside their schools before work, then march in together. The week of the walkout, which began on a Thursday, they held walk-ins on Monday, Tuesday, and Wednesday.

“I think it’s a really smart move to run walk-ins three straight days,” said Byrne, “so that we’re getting the message out to our parents and students, and so that the community, if they have any questions, we’ll be there to answer them.”

AEU has quickly built a communication network, including 1,000 “site liaisons.” “We needed a rep in every school statewide,” said Garelli, a leader in the group. “We asked people to step up and volunteer whether they were an association member or not.” Volunteers included not just teachers, but also bus drivers and clerical workers.

Site liaisons have received a steady stream of resources from the statewide group, including petitions, commitment cards, and chant sheets. There’s also a 50,000-member Facebook group where AEU leaders share updates; a smaller and more freewheeling group for discussion; and local AEU Facebook groups for each district.

Leaders of AEU say they're working “in parallel” with the teachers union, the Arizona Education Association, which supports the movement. Some site liaisons are also building reps (shop stewards) for the union.

It was AEU’s site liaisons who conducted the school-by-school votes on whether to walk out, held April 17-18. Building on the walk-ins, educators held “vote-ins,” rallying before school to submit their votes. Teachers in each school made their own ballot boxes—there were instructional videos posted on AEU Facebook pages, and emails sent to site liaisons—and decorated them with their school logos.

Two weeks before the vote, organizers had recorded 110,000 people participating in walk-ins in 1,100 schools. A petition supporting AEU’s five demands garnered another 35,000 signatures. In the end, 57,000 teachers and support staff cast votes on the walkout, with 78 percent in favor. The date was set for a week later.

On April 26, 75,000 teachers and supporters—all wearing red—marched through Phoenix on Day One of the walkout.

Credit the big turnout to the energy unleashed at the grassroots. “People keep messaging me, like, ‘Is it OK if I…?’” Garelli said.

A version of this article appeared in Labor Notes #470, May 2018. Don't miss an issue, subscribe today.

Jonah Furman is a staff writer and organizer for Labor Notes.jonah@labornotes.org
Related
As Omicron Rages, Teachers and Students Fight for Safety Measures in Chicago and Elsewhere »
Teachers Strike against a ‘Heartless’ School Board in Biden’s Hometown »
How Oakland Teachers Took Control of Our Return to School »
Jordanian Teachers Union Leaves Behind Legacy of Wins »
Pandemic Discrimination Against Asian Americans Has Long Roots »