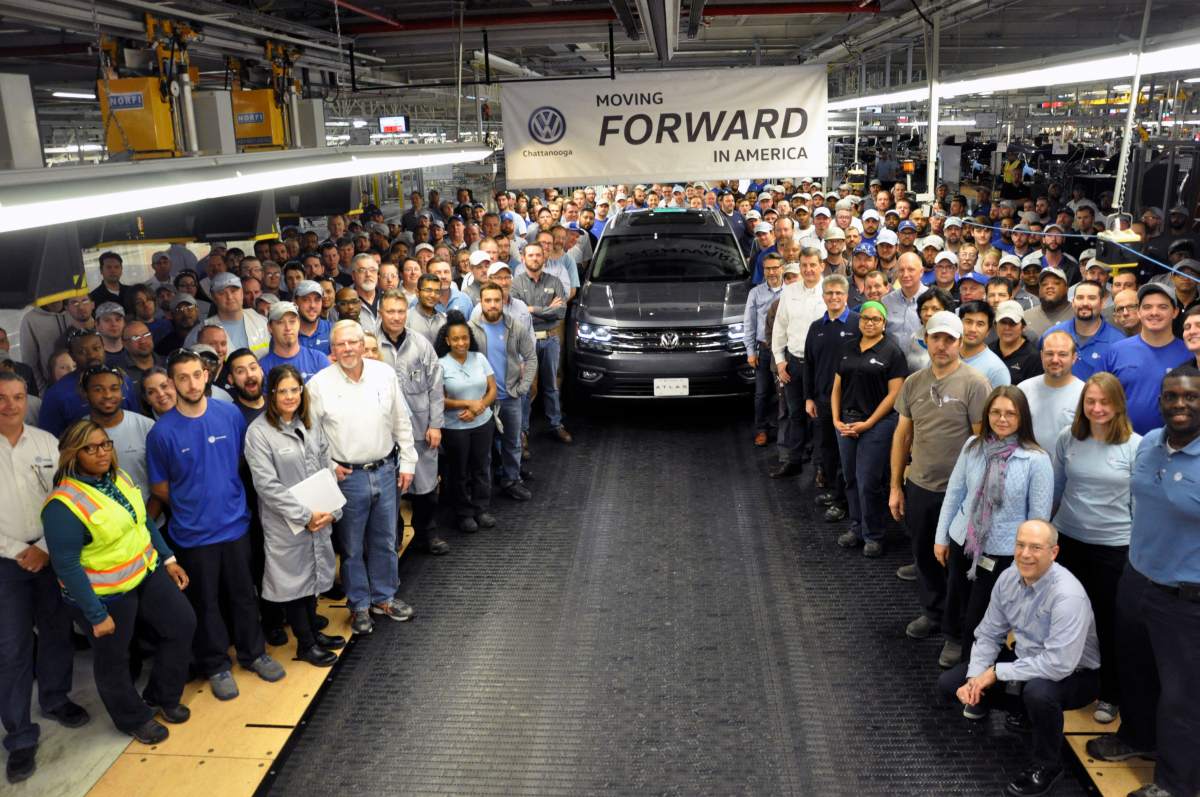 After losing a high-profile election at the Chattanooga Volkswagen plant in 2014, the Auto Workers won a smaller unit: the skilled-trades workers at the plant. Now a Trump-appointed Labor Board is about to undo even that small victory. Photo: Volkswagen

Two years ago the Auto Workers (UAW) broke new ground when skilled-trades workers at the Chattanooga Volkswagen plant voted 108 to 44 in favor of unionizing.

It was the union’s first victory at a foreign-owned automaker in the U.S. South.

But the success was short-lived. The UAW went on to suffer several high-profile losses, including at Nissan and Fuyao last year.

But now, even that small victory at Volkswagen is likely to be stripped from the union by the D.C. Circuit Court and Trump-stacked National Labor Relations Board.

Only 162 skilled-trades workers in the maintenance department at the Chattanooga plant were eligible to vote for unionization in 2015. The year before, the union had lost an election to represent all 1,500 hourly employees.

What allowed this vote by a smaller section of the workforce was the Labor Board’s 2011 Specialty Healthcare ruling, which gave unions more influence over which workers would be included in a bargaining unit.

The Auto Workers were falling in the footsteps of retail workers at Macy’s and Target, where the ruling allowed specific departments like cosmetics or the pharmacy to form their own bargaining units. Specialty Healthcare meant that unions could target their campaigns to the areas where they had greater support, rather than be forced into wall-to-wall elections.

Volkswagen had previously pledged neutrality, but as soon as the UAW had a foot in the door the company went on the attack. The company announced that it would fight any Labor Board decision to recognize a unit that did not include all hourly-wage production employees at the plant.

Volkswagen refused to bargain with the skilled-trades workers—a violation of federal labor law, but one that allowed the company to buy time. The UAW brought unfair labor practice charges, which Volkswagen appealed.

As the appeal slowly made its way through the courts, Donald Trump was elected president and the Labor Board was reconstituted with a Republican majority.

In December, the Trump Labor Board rammed through a series of pro-employer rulings demolishing Obama-era gains for unions. Among these rulings was a complete reversal on Specialty Healthcare, once again giving employers substantial power to ensure that the size and composition of a bargaining unit benefits the company, not the union.

Following the Board’s reversal, the D.C. Circuit Court kicked Volkswagen’s appeal back down to the Labor Board to be decided under the new precedent—all but guaranteeing that the skilled-trades vote will be overturned.

Speaking to Reuters about the possible ruling, UAW President Dennis Williams said the union “may have to go back to striking to get recognition.

“We’ll shut down these companies we’re organizing,” he boasted.

But multiple current and former Volkswagen workers, all pro-union activists, expressed deep skepticism that the union was ready to back up this claim.

Activists pointed to UAW staff incompetence, the union’s placing too much trust in the company, and its lack of interest in organizing around workplace issues such as inadequate training, repetitive stress, and increased line speeds.

Activists said these were some of the reasons why the UAW failed to organize a strong enough majority of workers in the plant to win a wall-to-wall election in the first place—and these same factors would be major obstacles to a prolonged strike.

“The UAW is nowhere near organized enough for a strike,” said Byron Spencer, a production worker on the door line who has worked at the plant for seven years.

“I agree with Williams that workers need to be engaged in direct action to secure our labor rights,” Spencer said. “Volkswagen has been dishonest and acted in bad faith on many occasions.”

But, he said, “the UAW has consistently failed to act.”

Instead, the union has discouraged workers from collective action—and spent years preaching partnership in the company’s productivity-maximizing lean management scheme.

Wayne Cliett has also worked at Volkswagen for seven years and was a member of the UAW’s leadership committee in the lead-up to its 2014 election loss. Rather than make empty threats, he said, the union should focus on getting its own house in order.

“Looking at the UAW’s history of trying to organize the South, I think it’s probably time they started questioning their strategy,” Cliett said. Read more of Cliett’s take on the UAW’s Volkswagen organizing strategy here.