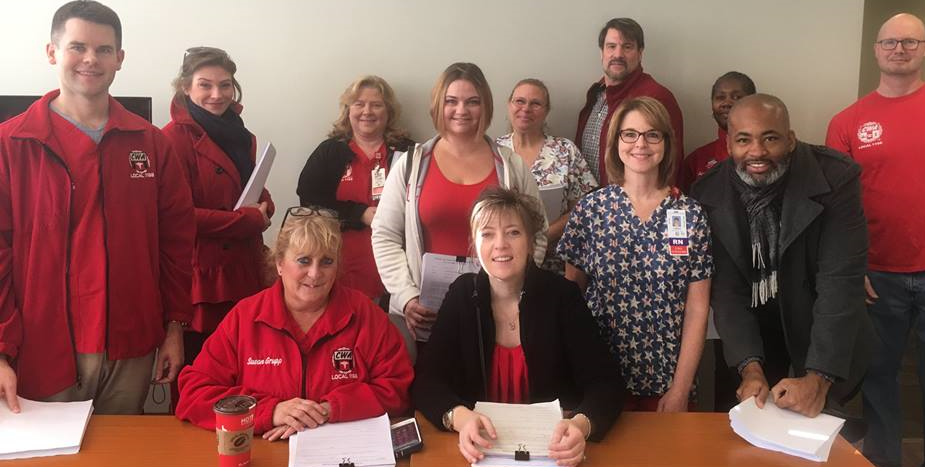 Wearing scrubs emblazoned with cheery cartoon characters, superheroes, and holiday themes is a point of pride for many of us who work at Kaleida Health in Buffalo, New York. It’s especially important to patients at the Children’s Hospital—bringing a little life into what can otherwise be a dreary, even scary, place to visit.

But last fall, administrators tried to wiggle their way around the contract language and impose uniform scrub colors.

The company argued that assigning colors by department or job would help avoid confusion among patients and family members. We objected, and eventually agreed only to continue discussing the issue with management.

After the contract was ratified, the unions and Kaleida exchanged studies, shared professional opinions, and discussed what other health care systems do. But despite many meetings, we reached no agreement. We thought scrub colors would be a non-issue until at least 2019 bargaining.

Then in October, out of the blue, Kaleida decided to ban printed scrubs as of January 1, 2018.

Members were incensed. “Scrubs are who you are,” said Karen Howard, a registered nurse at Millard Fillmore Suburban Hospital. “They’re your individuality—your favorite colors, hobbies, interests.”

Workers at the Children’s Hospital were particularly upset. So were nurses whose patients have dementia and Alzheimer’s. “Memory issues often create a state of anxiety and uncertainty,” said Mary Nowocien, a licensed practical nurse at DeGraff Memorial Hospital.
“Choosing warm, welcoming scrub apparel helps us create an environment that does not seem so institutionalized. It feels more like home.”

“I often work with patients who are in a very stressful time of their life,” said Cindy Harris, a registered nurse in the critical care unit at Buffalo General. “The patterns I wear to work are a memory tool, a means for my patients to be able to identify me.”

Union stewards got quite a few calls, emails, and texts about the issue. But Local 1168’s executive board was concerned our contract language didn’t give us strong enough grounds to win.

In our view this unilateral change violated the employer’s duty to bargain. When we brought it up in a pre-grievance meeting, though, management insisted it had the right to ban patterned scrubs, since the contract language only required Kaleida to discuss the colors of scrubs with us.

We quickly filed a grievance. Still, they had issued the policy change shortly before it would take effect, and we knew the grievance procedure could take us well into the spring. By then the damage would be done. What would be the quickest and most effective way to make Kaleida back off?

Stewards and executive board members decided to walk around the facilities to take members’ temperature on the issue. After a day of conversations it was clear that people were fired up.

Next we decided to draft a survey as a more systematic outreach tool. Organizers and board members handed each steward a stacks of surveys and promised to follow up in a couple of days.

This was a good structure test for our union. Where there was no steward, or where the steward only got a couple of surveys back, we knew we needed more help. In those areas we asked members, “Who do people go to with their problems? Who speaks up at staff meetings the most, or speaks on behalf of their department the most? Who organizes the holiday parties and gatherings outside of work?” The people named could probably get the job done.

Midway through the effort we distributed a flyer describing the survey results so far. This encouraged more people to participate; it also gave management an early glimpse at the results.

Meanwhile the press had started covering the story, after SEIU nurses and parent associations wrote blog posts and forwarded them to local TV stations and newspapers. Our local ABC affiliate asked community members what they thought, via Facebook, and got dozens of comments like these:

“They deal with sick kids who don’t like hospitals and are scared to begin with. Let them wear something fun to make the kids smile!” “Why make it look like a morgue? Kids love the prints.”

When we brainstormed the best way to deliver the survey results, one option stood out.

The grievance hearing was our chance to present our case to management. So we invited all the members who had put hours of work into collecting surveys to present them in person.

Union officers sat down with management as though we were about to begin a grievance hearing like any other. Suddenly in marched 30 CWA members, all carrying sheaves of surveys and sporting their favorite printed scrub tops or union-red scrubs, flanked by SEIU nurses. Our members piled the surveys into a stack 1,200 pages high and took their seats.

The management reps didn’t even wait to hear what we had to say about the survey results. They rose from their seats and jetted out of the room to caucus. Forty-five minutes later, they returned and announced that they had decided not to implement the ban on printed scrubs.

We anticipate that uniforms will be an issue again in our 2019 contract negotiations (along with continuing to improve staffing, and the usual fight to keep our benefits and improve our pay), but for now, we’ve managed to stave off the change—and built a stronger union in the process.

Patrick Weisansal II is a radiologic technologist for Kaleida Health and the director of mobilizing and organizing for CWA Local 1168.