Canada GM Workers Strike, but Can’t Get Guarantee on Jobs 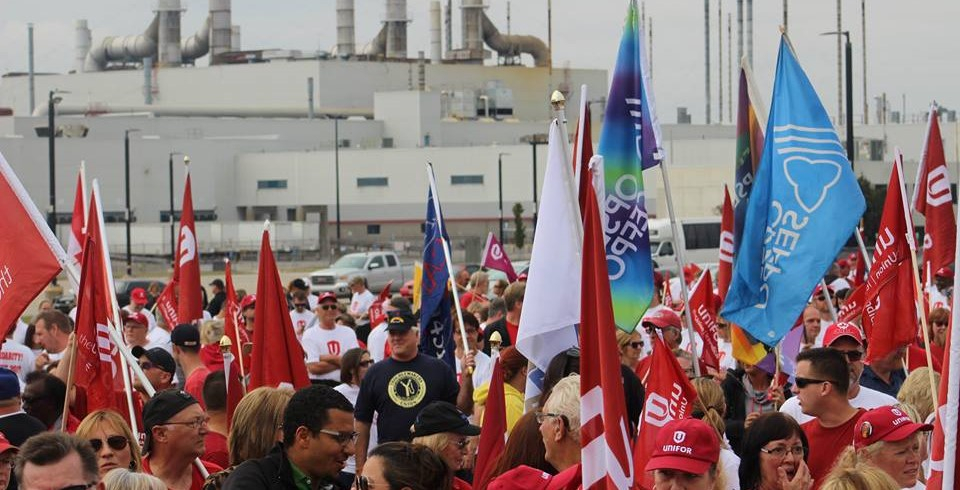 2,800 auto workers walked off the job for a month at GM's CAMI assembly plant in Ontario seeking contract language to secure their jobs. They returned to work without it. Photo: Unifor.

As negotiators from Canada, the U.S., and Mexico carry out secretive talks aimed at fixing NAFTA, a strike at an Ontario auto plant shows how difficult it can be to challenge the power amassed by corporations thanks to the trade deal.

The 2,800 members of Unifor Local 88 walked off the job September 17 at the CAMI assembly plant in Ingersoll seeking contract language to secure their jobs.

Local 88’s first strike was a strike that wasn’t supposed to happen. The CAMI plant was supposed to be different.

It was originally a joint venture of Suzuki and General Motors. Production began in 1989 built around concepts of “team spirit,” “worker empowerment,” and kaizen, or “continuous improvement.” These lean production methods were supposed to mean big profits and happy workers.

But workers quickly discovered that the feel-good ideas were used to institute a regime of management-by-stress. Grievances mounted as workers felt management was interested only in relentless productivity drives.

As one striking CAMI worker said at the time, “CAMI was a great place to work until we started making cars. It seems that once we started production, all the values got tossed out.”

The media thought CAMI workers were crazy for walking out in the middle of a recession with huge auto job losses. But workers won close to parity with Big Three auto workers and punched big holes in the lean production regime, such as establishing a pool of replacements for absent workers.

They returned a month later without it. Their contract is similar to the one reached at all the other Big Three plants in Ontario in fall 2016.

CAMI still produces the popular Chevrolet Equinox SUV, but in July General Motors, the plant's owner, moved the Terrain SUV to Mexico, costing 600 jobs in Ingersoll. This was despite the fact that in 2015, GM invested $560 million at CAMI to build a new weld shop, a move workers thought would protect their jobs.

The Equinox is made in two plants in Mexico, too. Local 88 wanted contractual assurance that its plant would remain the vehicle's “lead producer.”

Unifor National President Jerry Dias said of his decision to settle without job guarantees, “At the highest levels of General Motors corporate in Detroit, they coldly refused.” With the strike costing the company $5 million a day, GM threatened to shift all Equinox production to Mexico.

There seemed little alternative to settling for Local 88 barring more radical tactics, which were never under discussion by Unifor leaders.

The new pact includes more money for early retirement and for buyouts for younger workers, and increases by $100 million the severance and retirement costs GM would pay for a plant closing.

The four-year agreement will see a 4 percent wage increase plus $8,000 in lump sum payments and a $6,000 signing bonus.

Job security will no doubt still be an issue come 2021. The future of the auto industry in Canada remains up in the air.

Canadian employment at the Big Three automakers has been cut by more than half since NAFTA, from 52,000 in 1993 to just 23,000 last year. In the current renegotiation of NAFTA both Canada and Mexico have rejected U.S. demands on content requirements that Canadians say could sink the industry in Canada.

GM posted $9.4 billion in profits last year and the CAMI plant itself is hugely profitable, one of the most productive and efficient in North America with numerous awards for quality.

IN THE SHADOW OF NAFTA

It was not lost on CAMI workers, auto workers across Ontario, or the Ingersoll community how the timing of the strike lined up with the ongoing NAFTA talks.

“When you have a plant in Mexico that pays their workers $2 an hour and they can’t even afford to buy the cars that they build, then you’ve got a real problem,” Dias told Canada's BNN. “So, CAMI, this whole strike is the poster child for what’s wrong with NAFTA.”

Unifor has called for a better deal for workers in Mexico and the U.S., too. The union supported the Canadian government's demand that right-to-work laws in the U.S. be scrapped, and a Unifor delegation recently visited Mexico to meet with labor activists, calling for parity of Mexican wages and truly independent unions.

Auto workers in Mexico belong to a federation closely aligned with the ruling party. This federation, the CTM, is a company union, doing nothing to force up wages but acting ruthlessly against attempts to form independent unions. In fact, many workers don't even know whether their factory is unionized or not.

Retired Local 88 president Cathy Austin was on the CAMI picket line for five weeks in 1992. She says that strike “did not have support from the community like this one does; they have been overwhelmed by the support.”

An October 5 rally outside of the plant drew more than 500 people. Even a contingent of United Auto Workers members from Rochester, New York, visited the lines.

And though the strike caused shutdowns of auto parts suppliers in the area, Local 88 Trustee Kim Crump said the closures and layoffs actually increased community support, even among non-union parts workers.

[Gerard Di Trolio is a writer living in Toronto who covers labor and politics. Doug Nesbitt is an editor at Rankandfile.ca and a former union organizer.]