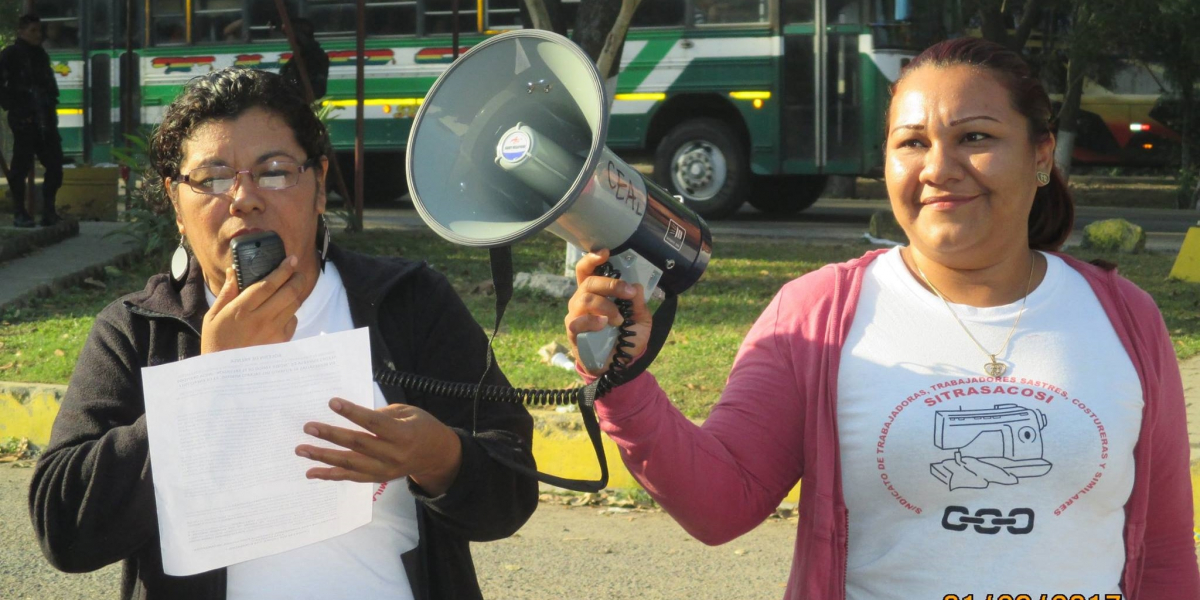 On January 1 workers in El Salvador won a big increase in the minimum wage—in some cases doubling their pay. But before they had time to celebrate, the multinational companies who thrive on the country’s still-low wages counterattacked with mass layoffs, judicial maneuvers, and a bid to undermine the eight-hour day. Photo: CISPES

On January 1, workers in El Salvador won a big increase in the minimum wage—in some cases doubling their pay.

But before they had time to celebrate, the multinational companies who thrive on the country’s still-low wages counterattacked with mass layoffs, judicial maneuvers, and a bid to undermine the eight-hour day.

“With the increases in the minimum wage, which are absolutely historic, we delivered an enormous blow,” said Estela Ramírez of the Textile Workers Union, SITRASACOSI, which was organized by women workers blacklisted from the free trade zones for their organizing,

“Now part of their campaign is to fire people, to carry out a terror campaign that businesses will leave and people will be without work. I think that this year will be one of enormous struggle, and we hope to have the support of our international allies.”

HOW WAGES GOT RAISED

The National Minimum Wage Council, a regulatory body made up of government, labor, and private sector representatives, sets minimum wages in El Salvador’s private sector. After the left-wing Farabundo Martí National Liberation Front (FMLN) won the presidency in 2009, the possibility emerged that labor and the government could vote together against the private sector on this council for the first time in the country’s history and bring some long-overdue relief to working families.

From 1980 to 1992 El Salvador underwent a devastating civil war, with the Reagan government strongly supporting the military dictatorship that brutally repressed labor unions and other sectors of the popular movement. Throughout the war, unions organized not just in their workplaces but also to end the dictatorship and to bring about democracy and social justice.

In the 25 years since end of the civil war, the Salvadoran labor movement has faced challenges similar to those faced by the U.S. labor movement. Right-wing governments, which ran the country until 2009, ushered in a series of privatizations and pro-business policies that led to attacks on unions and massive public sector layoffs.

The private sector, which today includes large multinational corporations, is virulently anti-union and has been notoriously difficult to organize. Weak labor laws incentivize employers to fire first and deal with the consequences later—usually just a small fine with no requirement to reinstate the fired worker. Salvadoran unions are therefore strongest in the public sector.

Given this difficult organizing terrain and the threats by many businesses, especially in the infamous free trade zones, to just pack up and leave at the first sign of worker organizing, Salvadoran unions often turn to international allies to hold multinational brands accountable.

Victories often result from a combination of courageous on-the-ground organizing and international solidarity, as in the case of Adidas subcontractor Manufacturas del Rio, where in 2014 factory workers finally won $1.5 million in back wages.

But union representatives on this and similar councils had, for decades, been controlled by business interests and were notoriously corrupt. They counted members of long-defunct unions as affiliates in order to claim to represent a larger percentage of workers. The depths of their betrayal was widely revealed last June, when labor representatives sided with big business to approve a paltry minimum wage increase rather than the government’s much heftier proposal.

Under the FMLN government, the Ministry of Labor has remained relatively conservative. Due to the continuing power of the country’s oligarchs, the FMLN has treaded carefully. However, outrage from large swaths of the population over the council’s decision gave new Minister of Labor Sandra Guevara the gumption to hold new elections for labor representatives, opening up the process to public and private sector unions and ensuring a level of transparency that had never existed before. The progressive labor movement agreed on a common slate of candidates, and won.

This level of unity was not necessarily a guarantee. Salvadoran labor law makes it relatively easy to start a union—only 35 members are needed—but extremely difficult to negotiate a contract, especially in the rabidly anti-union private sector. The labor movement has thus often been besieged by competition, including within workplaces, to win enough members to bargain.

Seven years ago, recognizing the historic opportunity the FMLN’s victory represented, progressive and left unions began to organize broad-based federations based on a shared class interest that would allow them to compete with the existing representatives. The new elections to the Minimum Wage Council created the opportunity they had been waiting for.

The council moved quickly to approve a new minimum wage to take effect January 1: $300 a month in commerce, service, and industry, and $224 a month in rural agriculture. The largest increases came in the maquila or textile industry, notorious for low wages and difficult working conditions, where the minimum wage increased nearly 40 percent from $211 to $295 a month, and for seasonal coffee and cotton pickers, who will see their wages more than double from $98 to $200 a month.

Though the hike merely brings El Salvador on par with neighboring Honduras and Guatemala, business is not accepting the change quietly.

“At first the reaction was one of surprise,” said Wilfredo Berríos of the Salvadoran Union and Social Front. “Then it was recalcitrant and miserly.” The blowback includes judicial challenges, threatening to close factories, and proposing their own labor “reforms” that would undermine the wage increase, specifically in the textile maquilas and call centers.

Both sectors have become very important in the Salvadoran economy. Throughout the 1990s and early 2000s, right-wing governments and international financial institutions like the International Monetary Fund decimated the country through privatization and attempted to create an export-oriented economy dependent on foreign investment.

Multinational corporations seeking low wages dominate the textile sector, which makes up 46 percent of El Salvador’s exports and employs more than 73,000 workers. The industry boasts that it makes up nearly half of all manufacturing jobs in the country; manufacturing overall represents 22 percent of workers in the formal sector.

Factories run in large part by Salvadoran, Taiwanese, and Korean owners produce for brands like Adidas, Walmart, and Hanes. Fruit of the Loom itself is the largest single private-sector employer in the country, employing an estimated 12,000 workers directly across four of their own plants, and thousands more through contractors.

The call centers are a newer phenomenon, although they have grown exponentially by taking advantage of the influx of English-speaking deportees from the United States. As some of the largest private sector employers, maquila and call center owners don’t hesitate to throw their weight around.

Within weeks of December’s minimum wage victory, the private sector renewed its push to “flexibilize” the eight-hour day. Ramírez noted that this proposal was previously introduced—and defeated—in 2011. Flexibilization would mean “the loss of a victory of the working class, a loss of rights, a setback,” she said. 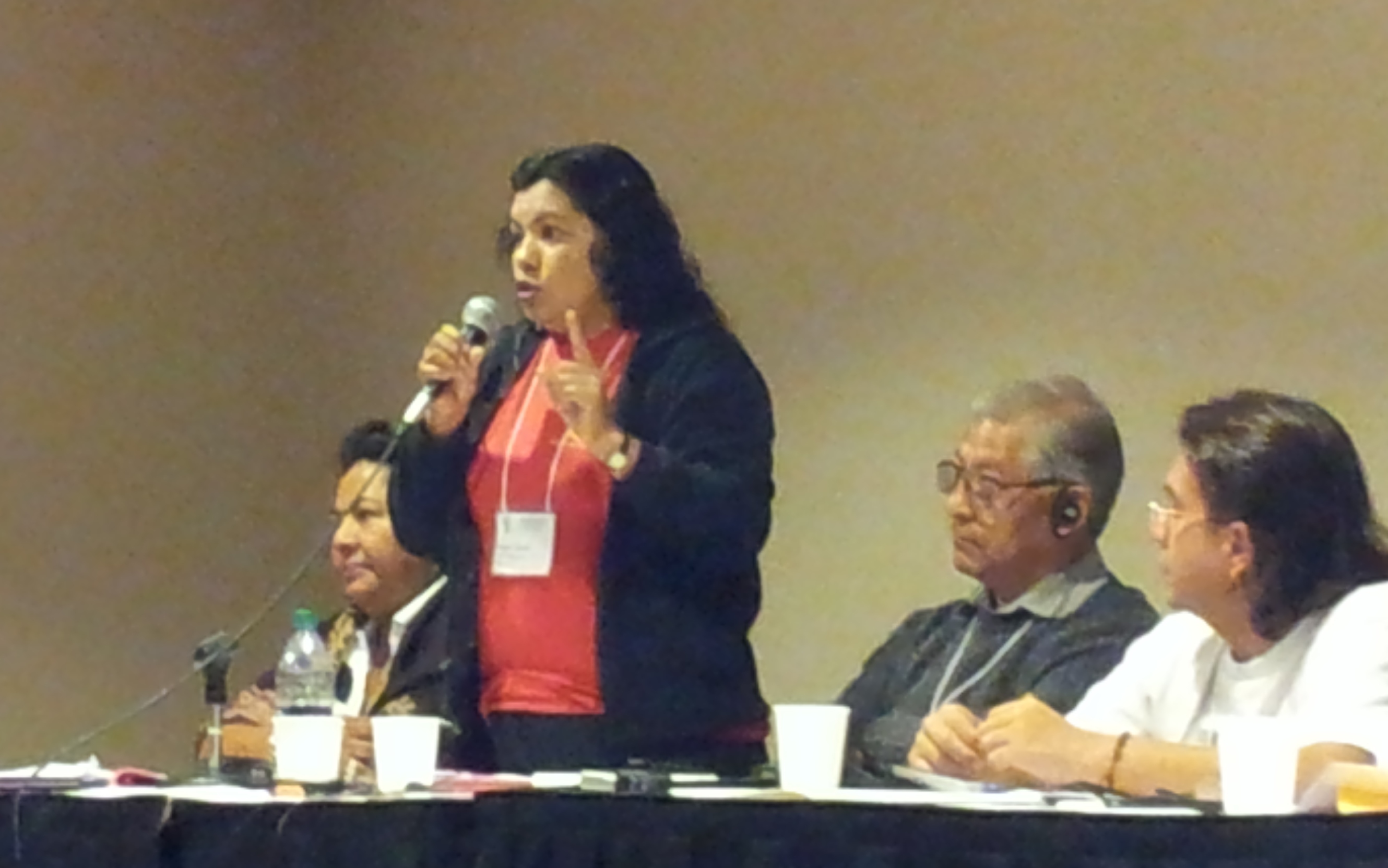 The “compressed week” proposal would change El Salvador’s Labor Code to allow employers in textiles and call centers to institute a four-day week with 11-hour shifts. Ramírez and SITRASACOSI say this schedule would functionally eliminate overtime pay, leading to a loss in monthly earnings, and jeopardize other rights enshrined in the Labor Code, including paid holidays, that are based on an eight-hour day.

But they’re most concerned about the physical strain that an extended workday would push onto an already overexploited labor force. The change would also fall hardest on women, who are usually responsible for most of the domestic work in the home.

It’s unlikely that flexibilization of hours would be confined to textiles and call centers, Ramírez said, calling this first attempt “a pilot program.”

On January 20 the Salvadoran garment manufacturer TEXOPS arbitrarily fired more than 70 workers at its plant in Opico, El Salvador, blaming the mass firing on the minimum wage increase. That same day the company also unilaterally lowered the production bonuses offered to workers and illegally applied the new, reduced amount retroactively.

The mass firings are a blatant violation of an agreement between the factory, the SITRASACOSI garment workers union, and the Fair Labor Association, but the factory continues to boast that it has the FLA’s seal of approval for its working conditions.

Click here to send an email supporting the workers and urge the FLA to take action.

Employers have also pushed back against the minimum wage victory in and out of court. The National Association of Private Enterprise (ANEP), the country’s main business lobby, challenged the election of the labor representatives to the Minimum Wage Council and asked the Supreme Court to overturn the increase.

A number of large businesses announced layoffs, blaming the wage increase. SITRACOSI members said the company Textiles Opico, which according to the company’s website produces sports apparel for “the likes of Nike, adidas, Under Armour, Levis, GAP, Reebok, Soffe, Dallas Cowboys, Dick’s Sporting Goods, Academy Sports and several other name brands and retailers,” used the new minimum wage as an excuse to fire more than 80 workers in one day, among them many union leaders.

Luke Walsh-Mellet is a solidarity activist currently based in El Salvador. CISPES is organizing a delegation to El Salvador this spring to meet labor and social movement organizers—find out more here..