Nova Scotia Teachers on the Verge of Strike 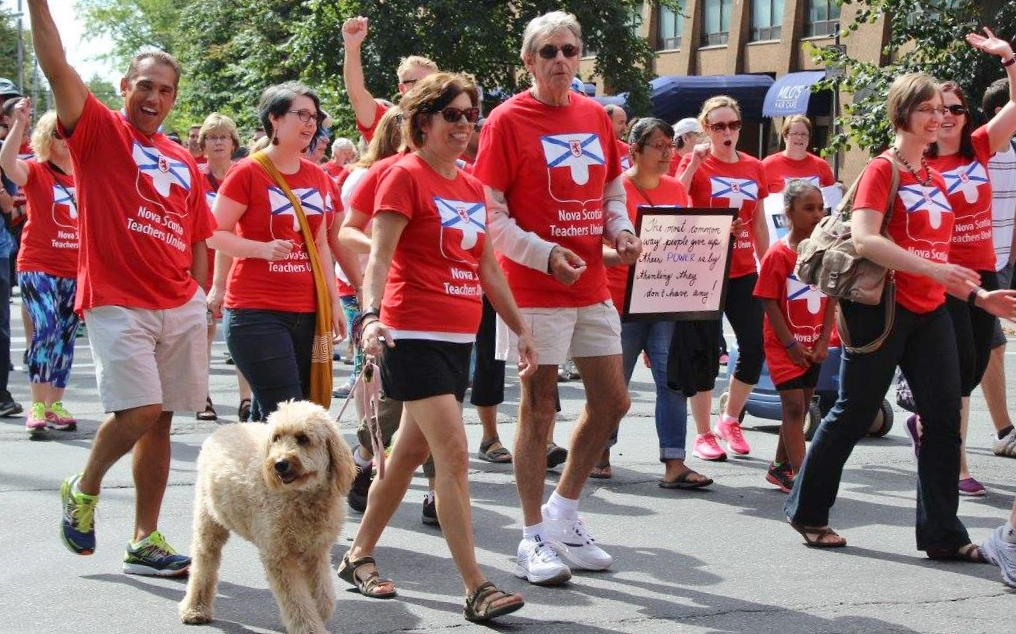 No one saw this coming a year ago, when the union seemed poised to take a good-enough deal to fend off the threat that the government would impose worse. But members decided to call the government’s bluff. Photo: Nova Scotia Teachers Union, Halifax County Local

What has led teachers in a sleepy Canadian province to the brink of their first-ever strike?

Members of the Nova Scotia Teachers Union voted by 96 percent on October 25 to authorize their provincial executive—the union’s board of elected officers—to call a strike or other job action. Voter turnout was reported as an astronomical 106.7 percent; even substitute teachers, not counted as eligible voters, could vote if they were working that day.

Legally, the union could strike as of December 3.

No one saw this coming a year ago, when Liberal Premier Stephen McNeil was celebrating a tentative agreement with NSTU. That deal would have frozen wages and eliminated the long-service award—a cash bonus at the end of a teacher’s career, based on years worked—for younger teachers.

On the good side, the deal avoided some controversial concessions proposed by Education Minister Karen Casey—things like longer school days and changes to who controlled teachers’ professional development funds.

The union executive, of which I was a member at the time, recommended that members accept the deal, satisfied to have dodged Casey's reform package. Besides, if members said no, McNeil’s government had threatened to impose the changes by legislation.

But members decided to call the government’s bluff.

In the lead-up to the ratification vote last year, debates raged in school staff rooms around the province. Social media was abuzz for weeks.

A particular sore point was the loss of the long-service award. Retired teachers implored younger members—many of whom admitted they’d been unaware this benefit even existed—not to give it up voluntarily.

Members also resented that negotiations had taken place with “a gun to our heads,” as the union’s lead negotiator Ron Pink put it. Perhaps most important, members felt the contract did nothing to ease their worsening working conditions.

Over the past decade, class sizes in many junior high and high schools have swelled to 35 or even 40 students. Student needs related to special education and mental health are getting ever more diverse, without enough specialist teachers, teaching assistants, or prep time.

And teachers are required to do more and more clerical work related to standardized test scores and individualized learning plans for special-needs students, in order to give the appearance of accountability—tasks which take away from actual teaching.

“My students need me to get to know them and how they learn,” said Drew Moore, a middle school teacher from rural Nova Scotia. “They need me to foster a classroom community that is safe and equitable. They need me to plan diverse, engaging lessons. Time spent plugging numbers into a program is time taken away from the things that matter most to my students.”

Six retired NSTU presidents sounded the contract’s death knell when, less than a week before the December 1 ratification vote, they put out a statement opposing it.

For the first time ever, members ignored their executive’s recommendation and rejected the contract by 61 percent.

The union and the government headed back to the bargaining table in January—but not before McNeil’s Liberals passed Bill 148, cementing the government’s meager financial package for teachers and other public-sector workers for the next four years.

Still, several months later, the union and the government managed to reach a second tentative agreement—which members rejected again, this time by an even larger margin (70 percent).

Members saw the second deal as much the same as the first one. It had the same financial package. This version would have created a joint committee to discuss working conditions, but members worried it had no teeth.

“Our government must commit to systemic changes at the bargaining table, not simply empty promises during committee meetings,” said Angela D. Gillis, a third- and fourth-grade teacher in Halifax.

Chastened and realizing it was time to follow the members’ lead, the union executive (I was no longer on it) turned around and asked for a strong strike vote. Members obliged.

Not surprisingly, the government has gone on the offensive. McNeil’s Liberal Party launched an ad campaign touting how much it has spent on schools during its three years in office.

The government insists that no more money will be offered as part of a new contract, neither for wages nor for improvements to classroom conditions. In the legislature, the premier suggested that teachers give up some of their sick days if they expected any further spending on education.

At the moment, though, the teachers seem to have a good amount of public sympathy. Large supportive Facebook groups of students and parents have sprouted up and begun organizing campaigns to write to, and meet with, members of the provincial legislative assembly (MLAs).

The parent group held a press conference at the legislature, garnering plenty of positive media attention. In unscientific online polls, local media outlets found respondents overwhelmingly favored teachers. “It is heartening to know that parents, community members, and teachers are all on the same team,” Gillis said.

Teachers themselves are also meeting with the nervous MLAs. In a province with a population of 950,000, the 9,300 public school teachers—plus an even greater number of retirees—could sway the next election, sure to be called within a year.

Normally a stoic, rule-following bunch, dozens of teachers have come forward with heart-wrenching classroom stories on social media and on a blog I help run, “Teachers of Nova Scotia.”

The blog launched in early October just after the contract rejection vote, and publishes about one story per day. It’s anonymous, since many teachers are hesitant to speak publicly if a story could identify their students or be perceived as critical of their school board, for fear of disciplinary action.

They describe ever-increasing workloads, especially relating to data collection and other time-sucking “accountability” measures. They lament their overwhelming feelings of failure when these measures prevent them from being able to meet the needs of students who are struggling in school. Several muse about leaving the profession.

Government and union negotiators returned to the bargaining table November 21, with the help of a conciliation officer. This hasn't stopped NSTU locals around the province from organizing rallies in front of MLA offices throughout this week.

If teachers do hit the picket lines, it’s anyone's guess how long a strike might be allowed to last. Both the governing Liberals and the opposition Conservative Party have hinted they would support back-to-work legislation—that is, the strike could be ruled illegal and a contract imposed, with stiff penalties for defying the law.

Although Canadian courts have overturned similar laws in recent years, it takes years for cases to wind their way through the court system, so it can still be politically expedient for governments to pass them.

The province’s largest union, the Nova Scotia Government and General Employees Union, which represents civil servants, is also set to vote on a tentative agreement this December—and although all indications are that a similar fight is in the works, the law prohibits NSGEU members from striking.

Whatever the outcome of these disputes, it’s clear the McNeil government will pay a political price. And rank-and-file teachers, especially those too young to remember previous labor-management disputes in the 1990s, will have discovered their political clout.

Ben Sichel is a high school teacher in Dartmouth, Nova Scotia. He blogs on education at noneedtoraiseyourhand.wordpress.com.