How Community-College Faculty Organized a Strike and Scored a Contract 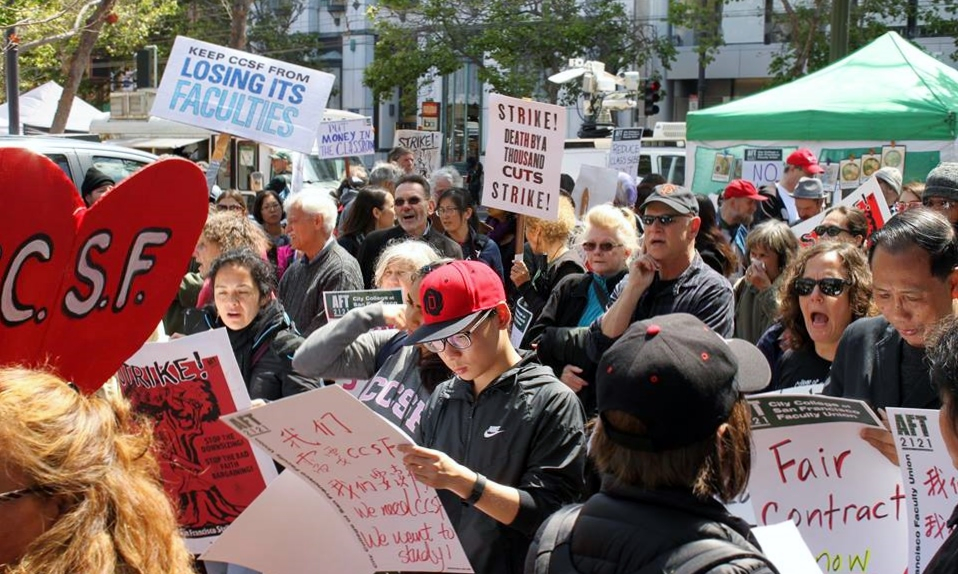 For the first time in its 40-year history, the union of full- and part-time faculty at City College of San Francisco recently went on strike—and it worked.

Teachers (AFT) Local 2121 pulled off a one-day strike April 27, despite the administration’s claim that the strike was illegal. By July, to head off another strike, the college agreed to a union contract with substantial raises. Faculty members had been working without one for a year.

Strikes in higher education are rare. Faculty work is isolated, and despite the popular portrayal of academics as having the ultimate job security, most instructors are part-timers with short-term contracts.

Part-timers often have to rush off to other jobs, making it difficult to build the social bonds necessary to take risky action together. And going on strike can be perceived as hurting students, many of whom at the community-college level are quite vulnerable: English-language learners, former prisoners, and the homeless.

At City College, a public community college of nine campuses built to serve 100,000 students, faculty faced the additional threat that the school could be shut down entirely. They organized anyway.

The roots of the strike go back to a crisis that many faculty view as manufactured.

In 2012 the Accrediting Commission (ACCJC) gave the college a year to prove why it should not lose its accreditation—and then tried to yank the accreditation, months before its own deadline. A Special Trustee with Extraordinary Powers was appointed to bring the college into compliance.

The commission hadn’t found anything wrong with the college’s quality of education. Instead, City College had apparently been singled out for opposing a change to the mission of community colleges statewide.

The accreditor was pushing legislation to limit programs that didn’t fit into the model of two-year “junior colleges,” which aim to prepare students to transfer to four-year institutions.

City College has always followed the “community college” model. Robust offerings for continuing education, English as a second language, and for students with disabilities and other non-traditional students make it one the city’s most important working-class institutions. In fact, 1 in 7 San Franciscans has either attended the college or hired a graduate.

“Everyone told us we should just put our heads down and do whatever the accreditor demanded.” said Alisa Messer, union president at the time.

Instead, Local 2121 cried foul. The union teamed up with community groups to organize demonstrations, filed a lawsuit, and supported the city attorney’s lawsuit against the accreditor.

A court injunction backed the protestors and kept the college from closing. A temporary compromise put the college on “restoration” status. The commission will review its accreditation again this October.

By the time their contract expired in 2015, faculty members were living on salaries 3.5 percent lower than in 2007, even before adjusting for inflation or the skyrocketing Bay Area cost of living.

And to “align” the college with its current enrollment, administrators launched a plan to reduce programs by 26 percent. For every course removed from the schedule, fewer students can look to City College for education in the future.

With the administration dug in, the union needed to build the capacity to strike.

The “S” word was scary. Leaders risked alienating members who might view strike talk as reckless. On the other hand, the demanded concessions would mean permanent downsizing, less access for students, and the erosion of faculty’s quality of life and autonomy at work.

Agreeing to all this, even to salvage accreditation, would cost the institution its soul. Plus, good-faith efforts to satisfy the ACCJC had never worked in the past.

Instead of announcing a strategy from the top, union leaders set out to discuss the pros and cons with members and give them the choice to prepare to strike or not.

The summer that the contract expired, members of the Contract Action Team began a campaign to make one-to-one contact with their co-workers. They asked each person, “Will you vote to raise dues temporarily to establish a strike fund?”

The strategy was twofold:

Activists got to talk through their co-workers’ fears and concerns, without asking members to commit to a strike yet.

For Contract Action Team member Valerie Berger, who teaches English as a Second Language, this strategy was similar to her daily work. “In teaching we call it scaffolding,” she said, where you start students on smaller tasks and build up to bigger ones. “Having done the first one, the second one is easier.”

In practice roleplays, faculty members learned both the strategic rationale behind the strike fund and how to have a one-to-one organizing conversation.

“In the beginning, talking to people at all was hard for me,” said math instructor Mary Bravewoman. “Then I realized these were my friends or my colleagues, and they didn’t bite—or at least, not that hard.”

Just finding people, especially part-timers, was difficult. To counter the isolation of academic work, where most communication happens through email, pairs of activists visited faculty at their homes.

The strike fund vote functioned as practice for a strike vote. Of 1,500 members, 650 signed commitment cards promising to vote yes. Of those who were asked to sign, fewer than 10 percent refused.

Throughout negotiations, the administration tried to split faculty between the roughly 650 full-timers and 900 part-timers. But the strike fund conversations anticipated this move. Activists inoculated their co-workers to expect an offer of a better deal for full-timers.

So members weren’t caught off guard when the administration did just that—offering nothing to part-time faculty, in exchange for a 4.5 percent increase for full-timers. Everyone knew that the negotiating team was going to hold out for equal raises for everyone, and that unity was the only way to stop another concessionary contract.

In September the strike fund vote drew the largest turnout in union history. More than 600 faculty voted, with 93 percent in favor of raising dues to start a strike fund.

The next step was a petition committing signers to strike if necessary, gathered through more one-on-one conversations. And in March, the union topped its record again, this time with more than 800 members voting to authorize a strike, and 92 percent voting yes.

By April, the union had assessed 1,000 out of 1,500 unit members as positive toward a strike—enough to confidently call a walkout. Most of the remaining 500 had yet to be contacted individually.

Some organizers will say that an entire unit has to be assessed before it’s wise to call a strike. But in the community college setting, faculty leaders judged that to be impossible task. It seemed a reasonable bet that most of the rest would follow the majority.

Through the academic year, union activists exhausted every other escalation tactic, from practice pickets to civil disobedience. The administration and the union still had to get through a state-mandated mediation process before an economic strike could be called. Management used this process to its advantage, prolonging negotiations toward a second summer, when a strike would be weaker.

The union hit back with unfair labor practice charges alleging bad-faith bargaining, which in California allows a public sector union to call a defensive strike. The date was set: April 27.

The administration claimed the strike would be an illegal pressure tactic, and threatened legal action. The beauty of a one-day strike, though, is that even if a court finds against it, it’s over before an injunction can be issued. Union delegates voted to go ahead.

The strike was a big success. Even though management tried to preempt it by closing all campuses for the day, and despite pouring rain in the morning, faculty strikers, students, and community members showed up to picket.

And in the afternoon sunshine, faculty from all nine campuses converged for a rally at San Francisco’s Civic Center. Members of other unions and community groups came too; easily 1,000 people filled the streets. It was a great morale booster for faculty to see the broad support for their work.

The threat of another strike in the fall brought the administration to the table. The agreement includes a 9.6 percent retroactive salary increase and a 10.6 percent increase for the coming year, for both full- and part-time faculty, with no concessions on working conditions. Members ratified it August 23, with over 600 voters and 97 percent in favor.

Next Local 2121 is leading a campaign to stop class cuts and make City College free for residents and workers in San Francisco. Voters will get the chance to approve the measure, which will be funded by SF proposition W, in November.

Michael McCown was the staff organizer for AFT 2121’s contract campaign and strike.

Related
As Strike Looms, UC Lecturers Raise the Stakes »
Cleveland Heights Teachers Strike in the Snow, Beating Austerity with Solidarity »
School and Campus Workers Say: Not Until It's Safe »
Graduate Employees at University of Michigan Strike over COVID, Police »
We Reinvigorated Our Undergrad Union… Just in Time for COVID Fights »