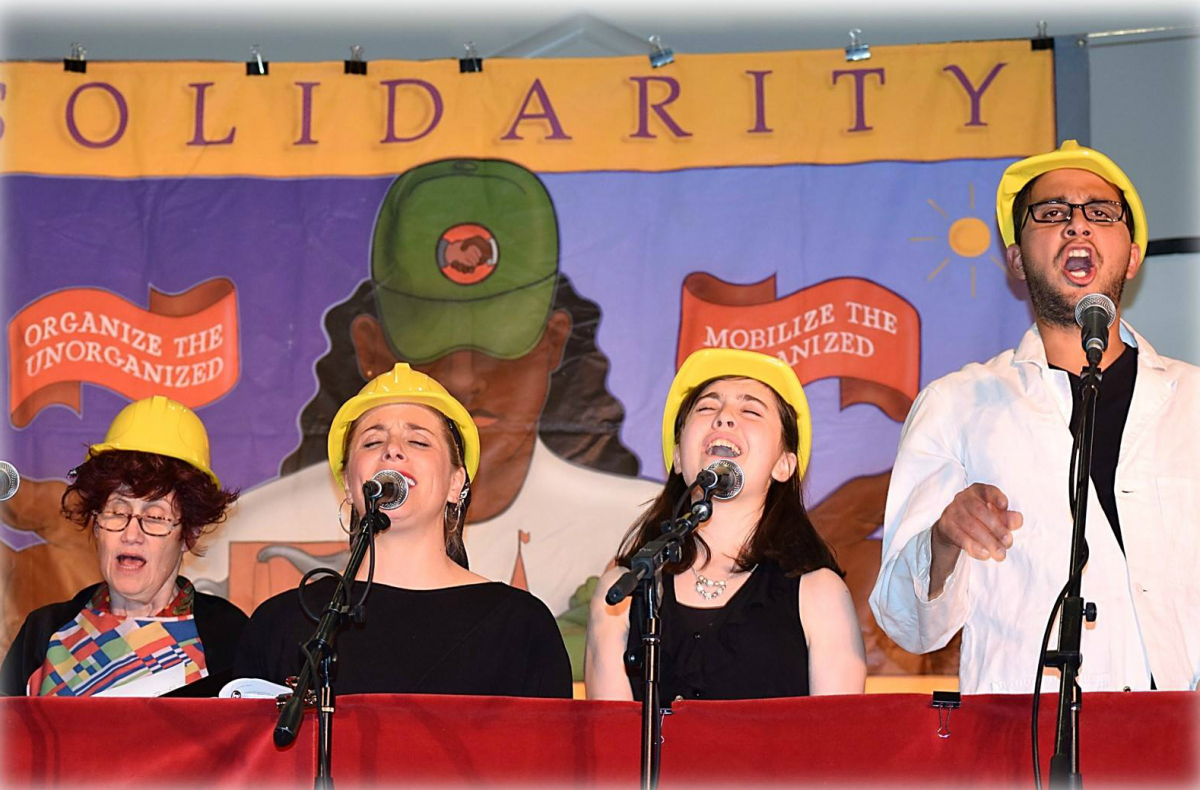 Longtime organizer Gene Bruskin's Pray for the Dead: A Musical Tale of Morgues, Moguls, and Mutiny tells the story of a morgue workers’ union contract campaign that leads to an unlikely uprising. Photo: Pray for the Dead.

It isn’t often that one gets invited to see a musical produced by a friend. And I have to admit, while I knew that Gene Bruskin has been a fine organizer for 40 years, I was a bit skeptical that he could also be a playwright.

But I had read his epic poem about the victorious organizing campaign he directed at the Smithfield Foods slaughterhouse in Tar Heel, North Carolina—so I shouldn’t have been surprised that his labor musical Pray for the Dead: A Musical Tale of Morgues, Moguls, and Mutiny is a winner.

I saw a July 19 performance at the training center of the Master, Mates, and Pilots in Linthicum Heights, Maryland. Afterwards I was able to interview Gene about his new production.

Labor Notes: First, what is the play about?

Gene Bruskin: The play is a musical comedy about political and corporate corruption, told through a story of a morgue workers’ union contract campaign that leads to an unlikely uprising.

You have been a labor organizer for over 40 years. What made you in retirement write a musical play? Why not a memoir?

I grew up on musical comedies in my house, with recordings of My Fair Lady and Fiddler on the Roof. My dad used to take me to Broadway musicals and plays when I was young, and I had a good feeling about it.

I did theater in the ’70s before I got into the labor movement. I did a couple of plays, very amateur things. I was briefly with the San Francisco Mime Troupe and saw the power of theater.

It’s absolutely true that not a lot of workers go to plays today. But there was a tremendous history of theater in the formative years of the labor movement in the 20th century.

There was working-class Yiddish theater. There were plays such as Waiting for Lefty, by Clifford Odets, one of the most popular plays in the ’30s, about cab drivers who meet to plan a strike.

The International Ladies Garment Workers Union in New York performed Pins and Needles, a pro-union musical revue of the news, with a cast of garment workers, which lasted five years on Broadway.

Coming out of World War II, we lost all that. It coincided with the change from the more militant and class-conscious unions of the ’30s to a labor movement that was more about traditional collective bargaining in the 1950s. That cultural life was lost and tainted by its association with the Communists.

But there were exceptions. For decades, the health care union 1199 in New York City maintained the Bread and Roses Cultural Project, which supported poetry, music, and plays performed by and for its members.

Cesar Chavez used theater brilliantly on the back of a truck with the Teatro Campesino. The big, bad agricultural boss, who was a fat ugly guy, prompted the farmworker audience to throw tomatoes. Then Chavez would come out and speak.

I call theater today “theater for the 20%.” It’s marketed to a relatively small slice of the population—people in the upper 20 percent of incomes, who are the donors and attendees. That is who it’s about and who it’s made for. There are not many plot lines involving machinists or bus drivers or sailors. The average worker thinks theater is for somebody else.

Pray for the Dead has some unforgettable lyrics and great toe-tapping music that could compete with Broadway hits. How did these songs come about?

I am a big lover of musical comedies. A song works best when it’s trying to express a feeling.

Like when Benita, a morgue worker and the protagonist, gets knocked down, it’s the ultimate indignity for her, and you can feel it with her song “You Gotta Be Kiddin.’” Or when Harmon tells frustrated union members that he doesn’t know how to get a good contract, the song “I’m Just a Union Guy” feels right for the moment.

For instance, with the song “It’s Not Easy to Be Rich,” you see the owner of the funeral home pleading with the audience, telling them it’s painful to be wealthy: “I don’t suggest you try it! But if you want a funeral plot, I’ll gladly help you buy it!” The play doesn’t play to the 1%!

How can people see the play?

We did a radio show version on Bill Fletcher’s show Arise! on Pacifica on August 19. It’s available for readers to listen to online.

We’ve got three performances left. One is at Busboys and Poets in Hyattsville, Maryland, on August 23.

Another is with SEIU 1199 in Baltimore, for the union. And then a final public performance, on September 27, is a benefit for a social justice church, the church of Rev. Grayland Hagler in Washington, D.C. Check our Facebook page for details.

We’d also be happy to hear from people anyplace in the country who’d like to have the play put on by local theater groups.

The labor movement desperately needs a culture, to build the spirit, love, and unity of the members. Part of how you bring people together is through singing and poetry and so on. We need that badly. People need to sing and laugh together as part of the fights that we’re all engaged in.

Christina L. Perez is a retired federal employee and member of the National Treasury Employees Union Chapter 212. For more information about Pray for the Dead, visit its Facebook page. To support the play with a donation, go here.

Related
Rest in Power, Anne Feeney (1951-2021) »
This Saturday: Watch Three Free Plays about Workplace Organizing »
TV Review: The Simpsons Strike—‘They Have the Plant but We Have the Power’ »
Northeast ‘Joe Hill 100 Roadshow’ Kicks Off in DC »
Don’t Leave Chants to Chance »