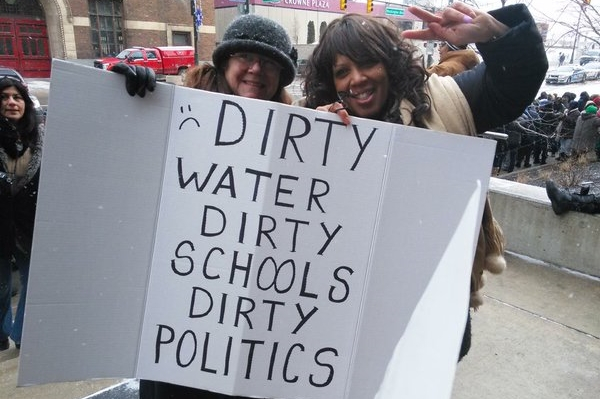 Detroit Public School teachers organized a slew of rolling sickouts this school year, culminating in a January 20 day of action that shut down 88 out of 97 schools.

Detroit teachers are resilient. You have to be, if you work in a building overrun with mice and mold; if your paychecks have been shrinking steadily for years; if your classroom is so overcrowded that there aren’t enough books or desks to go around.

“With them taking so much away from you little by little, it’s like we’re in this boat by ourselves,” said Lisa Card, a special education teacher at Osborn-Evergreen High School. “They created a system where you don’t have time to worry about anybody else; you have to take care of yourself.”

Just getting through a day can be exhausting. But teachers are finally banding together to reject the message that students in Detroit are failing because we aren’t qualified.

Teachers are speaking out about pay cuts, rising health care costs, inflated working hours, loss of preparation time, and the measures that were intended to keep us quiet: administrative bullying, abusive evaluation systems, and failure to bargain with the Detroit Federation of Teachers.

Our schools continue to function only because of the dedicated professionals who work directly with students—but the working conditions have never been sustainable. There are hundreds of vacancies. After a few sparsely attended job fairs, new staff members are finally being hired in, often at pay grades above the salaries of current employees.

Why can’t the problems that most directly impact the schools be solved? The district’s financial state continually used as an excuse. The debt is wielded as a buffer between what students have and what they need.

But teachers are questioning where the state-appointed “emergency managers” have chosen to invest. Michigan law allows the emergency manager to override our elected school board, leaving the community almost no way to hold the decision-makers accountable.

The district already had a legacy of corruption. Emergency managers have only exacerbated the problem, driving us hundreds of millions of dollars into debt.

This school year, millions were poured into the services of a consulting firm, Learning Sciences Incorporated (LSI). Its consultants visit classrooms, observe teachers, and advise principals on how to improve school climate and academic instruction.

Teachers are frustrated at such expensive intrusions. The consultants have met with increasing hostility from teachers who were pulled from their classrooms during instructional time to attend workshops that they did not find meaningful.

“Detroit has the most teachers that have a master’s degree or higher in the whole state,” said Syndeara Jackson, an instructional specialist at Schulze Academy. “Do we really need an outside consultant to tell us about teaching strategies?”

On days when LSI is scheduled to observe, teachers are making their distaste known by dressing in black.

FROM FLINT TO DETROIT

Detroit’s schools have been subjected to a host of failed experiments. The majority of the student population has already been lost to charter schools or to the Education Achievement Authority (EAA), a separate, state-run district within city limits.

The district’s irresponsible investments have included brand-new buildings that were immediately taken over by charter or EAA schools, and massive book deals for curriculum materials that were used only briefly, then abruptly replaced.

To address low student performance, past emergency managers imposed punitive measures based on teacher evaluations. Teachers are only considered “highly effective” when their students make more than a year’s worth of academic growth during the school year. Anything less can result in a loss of points, and a pattern of poor scores impacts our job security.

The emergency managers tend to have business backgrounds, and very little knowledge about what it means to create successful learning environments. Before Emergency Manager Darnell Earley came to the Detroit schools, he held the same position for the city of Flint—where he oversaw Flint’s disastrous switch of water source, which poisoned all its residents with lead.

Earley recently announced his resignation from the Detroit Public Schools, but nothing’s been done to reverse the crises he’s walking away from.

Staff and students are outraged that we’re being held accountable for financial decisions that were made without our input. Since the debt was accrued on the watch of governor-appointed emergency managers, most of us feel that repaying it should be the state’s responsibility.

Instead, Governor Rick Snyder has been pushing for legislation that would create an entirely new school district in Detroit, an approach he calls “Old Co, New Co.”

Under his plan, Detroit Public Schools—the “old company”—would exist only to pay off the current debt and would dissolve when that was accomplished. In its place, a new district would be formed.

Teachers are rightly suspicious. Many fear the plan would streamline efforts to privatize what remains of the public school system.

“I think it’s a cover-up,” says Card, “and it’s another way to not address what’s already been taken from us.”

The changes to come, along with the current conditions, have produced a swell in energy and fearlessness among teachers who once saw themselves as too vulnerable to act out.

Thousands of district employees turned out to a union coalition rally at the capitol on November 3, a scheduled professional development day.

Next, teachers escalated to sickouts—organized independently by rank and filers, not union leaders. During the two weeks leading up to and following winter break, a few schools at a time would vote among their staffs to shut down.

We often use social media to strategize and keep each other informed of developments in the district. But we were more covert in the days leading up to our schools’ individual actions—since, with enough advance notice, administrators were able to thwart some of the planned sickouts by bringing in backup staff to keep schools open.

Due to Michigan’s anti-strike laws, the sickouts were a tactic that was best organized without the input of the union leadership. Despite efforts to differentiate our actions from an official strike, 28 entities—including individual teachers, established groups, and the Detroit Federation of Teachers—were served with injunctions. In addition, state legislation was introduced that could broaden the definition of a strike and produce severe consequences for teachers who engage in one.

Teachers have also participated in neighborhood walks organized by union leadership to talk with residents near their schools about what they’ve been up against, and ask for support moving forward. February “walk-ins” around the district—schools held brief rallies, and some organized town hall meetings with parents—showcased the schools to the community.

Jackson laid out the solution many Detroiters have been advocating:

“I think the plan is simple,” she said. “The State of Michigan needs to pay the bill that they ran up, and then we should have an elected school board, a superintendent that is interviewed and chosen by the school board, and the Detroit Public Schools should be returned back to the citizens of Detroit.”

Nina Chacker is a teacher of the deaf and hard of hearing at Schulze Academy, a Detroit public school.