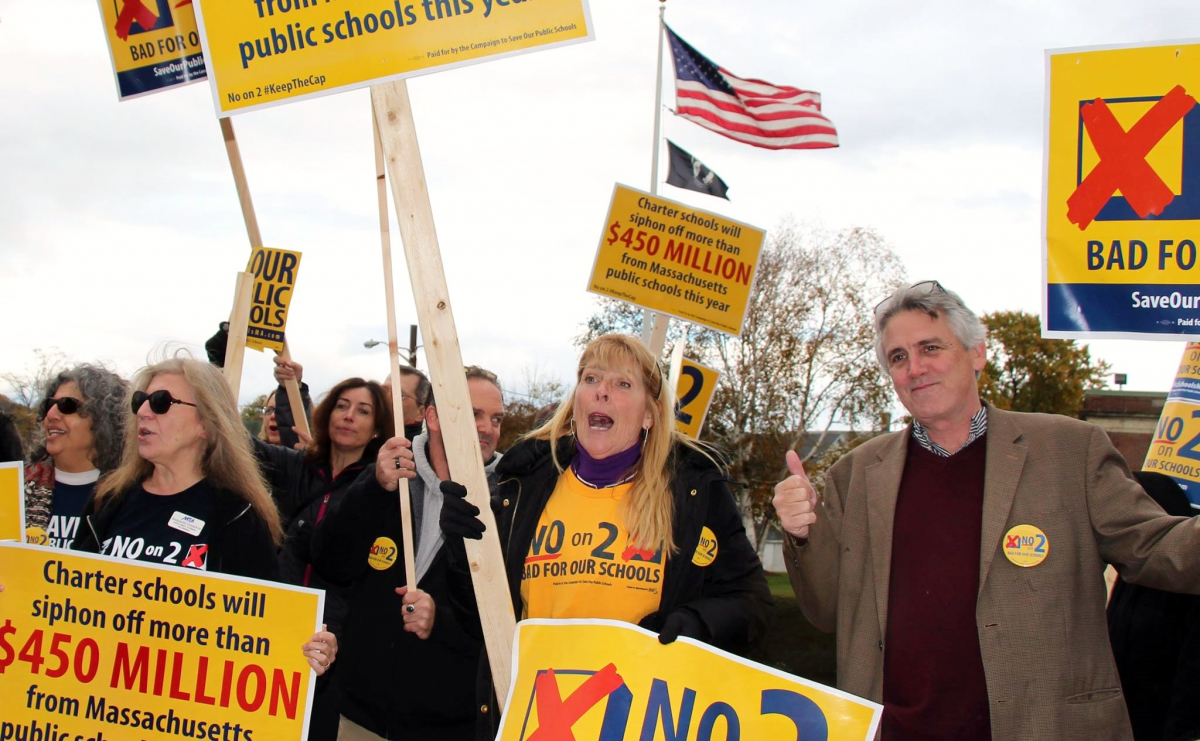 Question 2 would have opened the floodgates to privatize public education. But voters said no, 62 to 38 percent. Photo: Massachusetts Teachers Association.

One of a few silver linings in an otherwise doom-and-gloom Election Day was in Massachusetts—where, despite being outspent by corporate education reformers, a teacher-led coalition beat back charter school expansion.

“We took on the corporate giants and won,” said Concord teacher Merrie Najimy, president of her local union. “We did it the old-fashioned way, by organizing and building relationships.”

An existing cap limits Massachusetts to 120 total charter schools, and limits their number and funding per district. More charter spending is allowed in “underperforming” districts.

Although the state isn’t close to its overall cap, many large and urban districts have hit their limits, including Boston, Springfield, Worchester, Lawrence, Holyoke, and Lowell. Already the state has projected that its public schools will lose $450 million to charters in 2017.

Question 2 would have lifted the cap and allowed up to 12 new charter schools each year—opening the floodgates to privatize public education. But voters said no, 62 to 38 percent.

This was the state’s most expensive ballot measure, with $40 million spent in all. The pro-charter side spent $24 million, including $2 million from the Walton family, $500,000 from former New York City Mayor Michael Bloomberg, and $15 million from the pro-charter group Families for Excellent Schools. Local state banks and corporations chipped in $500,000; individual hedge fund managers and corporate heads, $1 million.

Unions were the main source of funding for the opposition. The statewide Massachusetts Teachers Association put up more than $7 million, its national union (NEA) gave $5 million, and the AFT, which represents Boston teachers, gave $2 million.

But countering the deep pockets of the measure’s corporate backers was going to take more than glossy mailers and commercials. President Barbara Madeloni and allies on the union’s board and in the Educators for a Democratic Union (EDU) caucus argued for a grassroots effort from rank-and-file teachers. Teacher delegates endorsed the plan at their May annual meeting.

WHEN WE FIGHT, WE WIN

The No on 2 campaign reflects a sea change in the union’s mode of operation. Faced with similar attacks before, MTA had taken a different path.

Legislators and the union supported a backdoor compromise, agreeing to base teacher layoffs on evaluations rather than seniority.

Once elected, Madeloni and allies fought to change the MTA’s approach. They argued that fighting outright to defend the charter cap, rather than seeking a compromise with their attackers, was the best way to defeat the effort—and to build the union.

“This time we said, ‘We are going to fight, and we have to involve members. You are not going to win without the members,’” said MTA board member Dan Clawson.

The fight produced a quick political turnaround. In February, Question 2 was polling with more than 50 percent support—but in November, it went down to resounding defeat. “We thought the charter schools were unstoppable,” Clawson said. “As a result of this we are much stronger than we were before.”

As in many campaigns, the key was teachers and allies knocking on doors. They talked to voters about why lifting the charter cap would divert much-needed funds from public schools and weaken democratic control over education.

This was a big step for the statewide union’s 110,000 members, who weren’t used to grassroots organizing and activism. Till now, those who did volunteer in political campaigns were typically phone banking for candidates—rather than for an issue important to them and their union.

EDU played a key role in driving MTA members across the state into the No on 2 campaign. Caucus members put on hold their other priorities—running for union leadership spots, pushing resolutions inside the union—to focus on getting members involved to fight the ballot measure. They organized canvasses after EDU meetings and drove turnout in their own locals.

On top of member participation, coalition work was essential to the win. More than 200 local school boards sided with MTA and No on 2. The Save Our Public Schools coalition included the NAACP, parent groups, politicians, a variety of community groups, and unions.

The message of corporate-backed charter boosters, including the state’s Republican governor, was that lifting the cap would help students in the districts where charter expansion has hit its ceiling—giving parents more choices to get their kids off charter waiting lists and out of failing public schools.

Teachers and allies had to dispel a dishonest message. For one thing, it’s misleading to add up the number of students on charter school waiting lists as proof of the charters’ popularity. A student can be on multiple waiting lists at one time, or even enrolled in one charter and on a waiting list on another. Boston’s public schools have waiting lists, too.

And outside of the large urban districts that are already feeling the charter threat, MTA had to connect the issue to suburban teachers. Though the immediate impact would be felt in areas like Boston, the cap protects all districts. Lifting it would make any district vulnerable, if charter companies decided to set their sights there in the future.

“We won’t get a charter school in Concord because [the district] isn’t underperforming,” Najimy said. “But they could come in with a charter that offers a foreign-language program” to lure parents and students in more affluent districts.

A DRAIN ON PUBLIC SCHOOLS

MTA members focused their conversations on why the budget impact on public schools is far bigger than the number of students who opt out. The money does follow each student—but that doesn’t factor in the overhead and operating costs it takes to run a school or a district.

In cities with many charter schools, the public schools and charters compete for students and funds. If public school enrollment drops, the budget shrinks so much that the district lays off teachers, expands class sizes, or even closes entire schools.

Milwaukee was one of the first cities where private charter schools took root 20 years ago. Since then the district has lost 44 percent of the public school student population.

“As charter schools expanded, our union did not draw a hard line in the sand,” special education teacher Amy Mizialko, vice president of the Milwaukee teachers union, recently wrote for Labor Notes. “It didn’t occur to us in the 1990s and 2000s that we could lose students on this scale. But that’s changed as we’ve watched the systematic privatization of schools not only here, but in New Orleans, Philadelphia, Bridgeport, Detroit, Memphis, Atlanta, Little Rock, and Newark.”

Mizialko wrote that the latest legislative attempt to hand up to three schools a year over to privatizers would have pushed Milwaukee “dangerously near a tipping point to the planned extinction of our school district.” Through school-site and districtwide protests, the teachers fought it off.

In Massachusetts, when even a single charter school came to the town of Hull 12 years ago, said teacher and local president Deborah McCarthy, “we began to experience a budget shortfall as a result of money being diverted.”

Boston isn’t the only district where the public schools are under-resourced, McCarthy said. “You hear all the time, ‘This is about the urban schools,’” she said. “It’s not true. We don’t have a librarian. Our students aren’t being serviced for their emotional needs.”

Teachers pointed out that Massachusetts schools are underfunded by $1 billion—and argued that the real remedy is increase funding and resources for all public schools.

To drive home the reality that Question 2’s effects would be felt beyond the urban districts, MTA produced an interactive online map showing how much money each district was already losing to charter schools.

Recruiting teachers to canvass was a challenge for the union. But when teachers did come out, they were warmly received at the doors.

“We got such affirmation,” Najimy said. “This proved to teachers that we are respected, that we are the voice of authority. Everybody is asking the teachers how we should vote on this. That motivates people to do more.”

She also visited her district’s three schools to talk with members there; held a “No on 2” sign at busy intersections; gave out buttons, bumper stickers, and yard signs; phone banked; and door knocked.

“It’s out of my comfort zone,” McCarthy said, but “I think of others who have gone before me in fights for racial equality. My kids in my classroom are worth fighting for.”

Activists credit the grassroots outreach for swaying these legislators. “They are coming to us on our terms, instead of them expecting us to come to them and throwing us crumbs,” Najimy said. “Crumbs aren’t good enough for our kids.”

EYE OF THE STORM

In Boston—by far the state’s most populous city, and with the most charters—it wasn’t such a hard a lift to convey the urgency of the ballot measure, said Jessica Tang, the organizing director for the Boston Teachers Union. BTU is part of AFT, but worked in coordination with the NEA-affiliated MTA.

“The heart of the issue is funding. We already lose half of state aid to 19 charter schools,” Tang said. “It’s also about equity. We serve a different population of students than charters. We have two times the students with severe disabilities. We have more English language learners. We have students who have just come into our district, speaking zero English.”

Boston’s charter schools are plagued with high suspension rates. Amid rising nationwide scrutiny of how suspensions and disciplines target students of color, parents and activists are seeing in a new light the “no excuses” policies that charter schools often tout.

Lifting the charter cap would also have undermined local control, Tang said. “We will have no say in where new charter schools will go,” she said. “That’s hard when we do long-term planning.”

The No on 2 campaign continued Boston’s ongoing fight for funding. Supported by teachers, students walked out of schools in March and May to protest budget cuts. On October 6, teachers, parents, and students held “walk-ins” at 115 schools around the city to draw attention to the No On 2 campaign.

Already-active parents stepped up to counter the pro-charter misinformation, Tang said. Parents started a hashtag, #visitusCharlie—referring to the pro-Question 2 governor who claimed to care about Boston students—and circulated online petitions against the measure.

The week before the election, 100 Boston teachers plus teachers from neighboring districts joined a day of phone banking and canvassing.

“We’ve had so many teachers say this is the first time they’ve phone banked,” Tang said. Though charter supporters dominated in radio and TV ads, she said, “our teachers on the ground have been spreading the word.”

Next, Massachusetts teachers locals and their coalition plan to fight for fairer evaluations and increased state funding. “Once we win this fight, we stick together to start to tackle the others,” Najimy said.

The No on 2 victory offers a ray of hope to union members and public education activists, even as they grapple with the news of Trump’s presidential win. Building power locally will help not just on the statewide education fights, Madeloni points out, but also in the big picture.

“It’s really important that we did this work to beat Question 2, because we need what we built to face the next few years,” Madeloni said. “It would have been even scarier if Trump had been elected and we had not done this work.

“Workers would be alone and alienated from knowing themselves as powerful. That’s the thing we are saying to ourselves and to our coalition partners: ‘We are lucky to have something to build from.’”