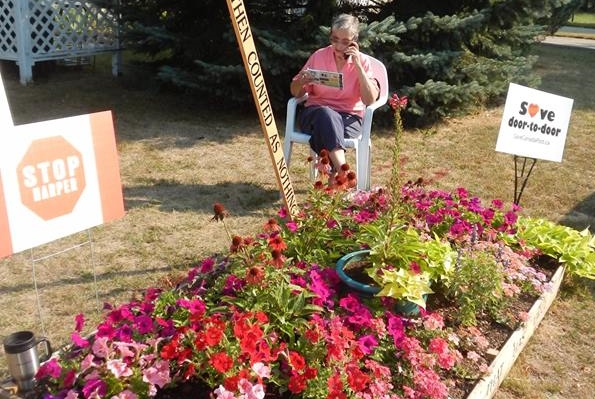 When she heard trucks rumbling up her street to install a “Community Mailbox,” Patti Dalton and her neighbors sprang into action.

“My partner went right out and took a chair and sat in the site,” said Dalton, the president of the London and District Labour Council in Ontario, Canada.

Neighbors soon joined in. Dalton posted the news on Facebook, launching a spontaneous “protest party” that lasted through two of the summer’s hottest days.

She and her partner even brought out an air mattress and camped overnight: “It was sort of funny waking up in the morning and saying ‘Where am I? Oh yeah, I’m at the protest site.’”

The campers won. The mailbox was never installed; the postal worker serving the neighborhood kept her job. And creative, grassroots actions like this one helped stop an overhaul of Canadian postal services that would have decimated mail delivery and laid off thousands of postal workers.

The “Save Canada Post” campaign taught “a pretty powerful lesson,” said Dave Bleakney, a national officer of the Canadian Union of Postal Workers (CUPW): “People saw we can stop them, we can change things.”

The protest party didn’t come out of nowhere. The union’s campaign to Save Canada Post began after the agency announced in December 2013 that it would phase out door-to-door delivery in urban areas, eliminating up to 8,000 jobs.

Customers would have to pick up their own mail from clustered Community Mailboxes.

London’s labor council had a history of bringing together community activists and cross-union alliances, such as in campaigns to block cuts to public services and raise the minimum wage. So Dalton asked the local CUPW president, Dean Woronoski, how the council could help.

Together with local activists they formed Londoners for Door-to-Door. The name was chosen strategically to stress the local connection, and to show that postal workers weren’t the only ones concerned.

“Someone would ask, ‘Are you a postal worker?’ and I’d say, ‘No, I’m a teacher,’” Dalton said. “We’d show there was this broad coalition working on it.”

“We identified as local people, fighting for mail delivery in London because we paid for it and we deserve it,” said Bleakney, who acted as a link between the London and national campaigns.

Door-to-door outreach was key. Campaign members canvassed virtually every weekend between January and June of last year. The canvasses were short, targeting 25-30 houses—easily covered in an hour and a half. A CUPW member would pair up with a community or labor council activist.

Canvassers hit a nerve. “There was a sense of urgency,” said Dalton. “People were angry about the potential loss of door to door. They got it, and they wanted to do something.”

London CUPW President Dean Woronoski said common concerns included winter weather, the new obstacles that seniors or people with disabilities might face to get their mail, and simply “going down the street to do the work their letter carrier was already doing.”

Canvassers were ready to offer a range of actions, from speaking to a city council to signing a petition. Retirees who couldn’t knock doors phonebanked at the local CUPW office—which soon became a campaign hub—asking supporters to call councilors or come out to actions.

Dalton says she’s never been part of a campaign that resonated so strongly. “When people can connect a public service with an actual person with a human face,” she said, “they really understand what they’re losing.”

“What I learned is that everybody has the potential to be our ally,” said Woronoski. “Consider all groups, even those who you probably normally wouldn’t consider.” For example, the activists set up tables at libraries and went to seniors’ meetings to talk about the cuts.

The flipside of finding unexpected allies is learning to let them take the reins sometimes. Unions are often accustomed to tightly controlling their own programs. Having community members at the center of a campaign was an important shift, said Bleakney.

To reach postal workers, campaigners took their message directly to the workplace.

“Workers had been demoralized by management and the [Conservative Prime Minister Stephen] Harper government,” said Dalton, “so our intent was to speak to workers and let them know there was this coalition in the community that was supporting them.”

Bleakney recounted one of the first visits. Coalition members showed up at a postal depot without management permission.

A union rep started by saying, “I know people are really overworked and you need to get out on your routes, but we have something really important to hear from a customer.”

“Postal workers are really loyal to the people they serve,” said Bleakney. “As soon as that word ‘customer’ was said, you could see body language shift.”

A community spokesperson spoke next: “I’m here to tell you I’m not letting my door-to-door go.

“I need you, and you need me. Sign up and we’ll be in touch about saving and expanding door-to-door delivery.” Over half the workers signed up.

As mailboxes began to be installed in communities across Canada, the national news reported a slew of problems—such as wet mail, malfunctioning keys, and unsafe locations.

When the installers reached London last summer, the campaign there heated up.

London supporters managed to block many of the installations, and turn others into guerrilla gardens. An activist designed a wooden box that would fit over the concrete pad where a mailbox was to be installed. The box could be filled with soil, flowers, and “Save Canada Post” signs.

“We were conscious of the fact that it was workers whose job it was to put these sites in,” said Dalton, “but after a couple weeks they were told not to interfere in these protest sites.”

Visible wins like the one on her street helped build confidence and momentum. And the regular actions in London attracted weekly media coverage, amplifying the campaign.

Meanwhile, Save Canada Post had been taking off across the country, too, from blockades at postal depots in Quebec to protests in British Columbia.

CUPW assigned union members temporary work as coordinators to help build the campaign in their regions.

George Nickerson took on the member-coordinator role for the Atlantic Region. Locals there were some of the first to get active, calling an emergency multi-local meeting to strategize how to save door-to-door delivery.

Nickerson helped locals to “dig deep” and map their community networks. “Every community is different,” he said. “What works in St. John’s might not work in Fredericton.”

Members in St. John’s, Newfoundland, voted up an emergency measure to increase dues for 12 months to fight the cuts. Local 126 held town hall meetings; members met with local politicians urging them to speak out against Canada Post’s plan. The mayor helped circulate a petition and participated in local demonstrations.

Here too, door-to-door outreach was critical. Local 126 President Craig Dyer estimates members hit 4,000 houses in a single blitz: “It was an opportunity to inform people of what was actually happening.”

As St. John’s residents lost their door-to-door service last October, Dyer saw the impact firsthand on his own route. He used to deliver to 430 houses in Mount Pearl—a community just outside St. John’s. Now he’s responsible for 1,540 addresses, but delivers all the mail to 46 different Community Mailbox sites.

“There is an elderly woman who has to walk 500 feet uphill to get mail,” Dyer said. “That, to me, that’s not service. I’ve been delivering her mail a couple of years and now she’s got to get it. That’s not right.”

The new routes also put a strain on the remaining postal workers, who struggle to deliver it all: “You either work overtime or you’re not completing the route.”

Early on, as a silent protest, Local 126 members began wearing red “Save Canada Post” hats while delivering the mail. When managers told them not wear the hats, “that fueled the fire,” said Dyer, “and of course everyone wanted a hat.”

Two years later, Dyer says, the employer has given up. The hats are now essentially part of the uniform.

“We spoke with just about every MP in Atlantic Canada,” said Nickerson, “and chased Stephen Harper every time he came here.” Because of public pressure, Bleakney said, all three political parties shifted their positions on the issue.

A week after the Liberal Party won a majority government in October, Canada Post announced a halt to the mailbox installations—a huge victory, though the union is still fighting to restore delivery in places where it was already lost, like St. John’s.

“Many people said to us, including many city councilors, ‘This is a done deal; you are wasting your time,'” said Dalton. “But we felt from the beginning it was an issue we could win on with careful strategy and sustained actions.”

The Liberal government has promised to review Canada Post, and is expected to announce details soon. CUPW wants a public feedback process, including on its proposal to expand services and revenue through postal banking.

In the meantime, the union is heading into bargaining—and postal workers have gotten a taste of their strength. “You’ve got 50,000 people on doorsteps every day,” said Dyer. “We can make relationships, especially when people are sympathetic to the cause.”

Dear Brothers and Sisters,
I'm a union man -- have been for over 30 years. I am troubled by the issue here, which seems to be about saving jobs but may just be about our reluctance to realize and understand what to do when technology changes work. I recently read an article about "outbox," which was a company that had an alternative to postal mail, which was shut down by the USPS because it would have eliminated junk mail.
Now, everyone knows that most of our mail is junk. No one can get away from the catalogs and endless solicitations we don't want, from the pennies and nickels, pens, and cards mailed out to us over and over again.

These guys who created 'outbox' had an idea, according to the article, which was that they would intercept mail at the post office and scan it, send the scans to the postal customer, who then had the option to either choose not to receive the mail, to cancel the mail from that address, or to receive the mail.

I am an environmentalist and believe that the mammoth printing of junk mail is something that should be avoided because it kills so many trees and wastes so much fuel in the transport of paper products.

Now, I'm sure most people would agree with me, that if you could get your mail via scan and then decide what to receive and what not to receive, it would be great -- you could get rid of junk mail at the source. No postal worker would have to break his back delivering it, not to mention the dog bites, and no truck would have to burn fossil fuel to get it to your door.

But guess what -- according to the article -- which is here -- http://www.insidesources.com/outbox-vs-usps-how-the-post-office-killed-d... -- the USPS killed outbox. In an outrageous comment, the USPS admitted, or said, that the bulk of mail services are to cater to 300 or so huge junk mail houses, that incessantly sent out the direct mail political appeals, the catalogs, the charity solicitations, etc., etc.

This stuff should be killed off. If technology is creating a better alternative, we have to embrace it and work with all stakeholders to find better jobs.

Does everyone agree that coal miner jobs should continue even if it is killing the planet?