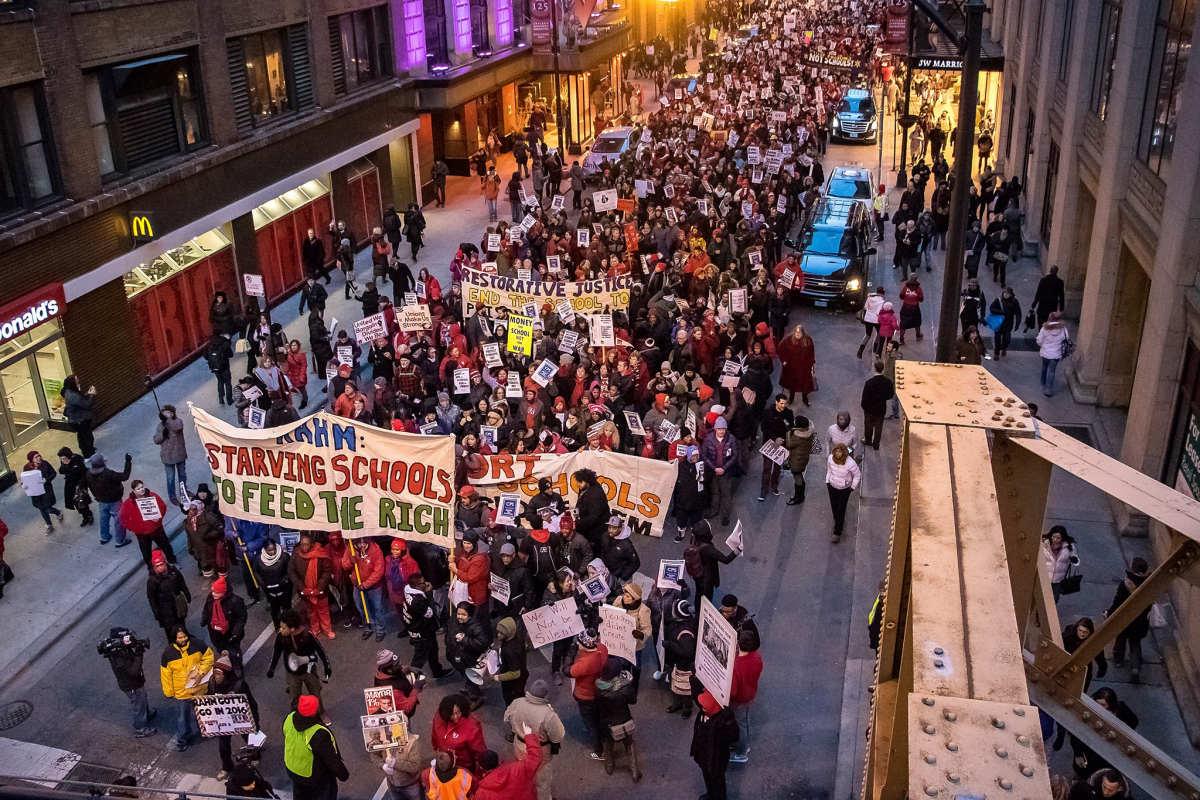 The Chicago Teachers Union has called for a one-day strike on April 1. They'll be joined by dozens of community groups and unions. Photo: Bob Simpson, CC BY-NC-SA 2.0.

It’s not a general strike—not yet, anyway. But April 1 is shaping up to be a big moment for the Chicago labor movement, and once again, teachers are leading the charge.

The Chicago Teachers Union will strike for a day against a double standard. While the city scrupulously honors its deals with the big banks, it’s threatening to unilaterally violate the teachers’ contract and slice their pay—along with the rest of the budget for city schools.

CTU won’t be alone on the picket lines. Dozens of community groups and at least eight unions have signed on to join the day of action, all victims of the slash-and-burn budgeting that’s left Chicago “broke on purpose.” They’re part of an emerging coalition that’s drawing the line between the titans of finance and the needs of the city’s working people.

This year’s Labor Notes Conference kicks off at a hub of resistance, where organized people are building the power to take on organized money.

The anger—and the organizing—in Chicago come not a moment too soon. A one-sided class war has funneled almost an entire generation of economic growth to the CEOs, the bankers, and the billionaire class.

Even retirees who worked for decades to earn their pensions are forced into a lopsided battle to stop their nest eggs from being snatched away. Politicians would rather gut public services and public sector jobs than tax the billions in profit that corporations like Boeing, Verizon, General Motors, and General Electric are raking in.

Employers are pointing fingers to make sure the rest of us don’t pick up the pitchforks. Teachers and bus drivers, they say, are bankrupting your city and taxing you out of house and home. If you don’t have a pension and good health care, why should they?

Such divide-and-conquer tactics are out front this election season. Supposedly it’s immigrants, or workers in Mexico or China, who are taking your job. But whether this tired line is coming from the boss or from a CEO con artist with a bad comb-over, the game plan is as old as the need for unions to counter bigotry with solidarity.

Real blame lies squarely at the feet of corporations like Walmart and trade deals like the Trans-Pacific Partnership that are steamrolling good jobs—here and abroad—and the unions that fought for them.

In February, West Virginia became the 26th so-called right-to-work state, following Wisconsin, Michigan, and Indiana. The death of Supreme Court Justice Antonin Scalia brought only a temporary reprieve from the looming threat of open-shop conditions in the public sector, too. The Friedrichs v. California Teachers Association case is delayed, not dead. Meanwhile Friedrichs-style lawsuits sprout up at the state level, as in a recent case against New York’s Public Employees Federation.

Anti-union forces are ready for open-shop America. They’re already training their sights on their next target: unions’ right to exclusively represent a bargaining unit.

But there’s a bright spot—a stubborn note of resistance in the country’s political mood, evident in the surprising momentum of underdog Bernie Sanders’ campaign for president.

Plenty of union members are also fed up with the status quo. Last fall, for example, Chrysler workers sent the Auto Workers top brass back to the bargaining table, voting no 2 to 1 on a contract that would have cemented their two-tier wage scale.

New hires started at $15.78 an hour, just over half the pay for “legacy workers.” The union had taken the hit in 2007, when two-tier was sold as a salve for the flagging automaker. But by last year, the revived company was making millions—and the second tier had ballooned to 45 percent of the workforce. Thanks to the grassroots revolt, union tops returned with an improved settlement that put most second-tier workers on a path to top pay.

The same spirit roiled Teamsters who haul cars from auto plants to dealerships, who voted down a concession-ridden agreement by 87 percent in October, and mechanics at railroad giant CSX, who in December nixed a job-killing pact by an 8-to-1 vote.

Some unions hit the picket lines to beat back concessions. Steelworkers at Allegheny Technologies endured a six-month lockout rather than let the company gut their contract. Wisconsin’s Kohler factory workers struck for a month against two-tier wages and health care cost-shifting, winning a partial victory that narrowed the gap between the tiers.

Thankfully, more unions are reaching for labor’s oldest weapon, and not just as a last resort. Chicago movers at Golan’s struck for six months to win their first contract, reaching an agreement last year. In November, a small band of IKEA workers struck for recognition.

To protest funding shortfalls, teachers in Washington state staged rolling strikes, culminating in a week-long walkout in September by Seattle educators who demanded, among other things, that kindergartners get at least a half-hour of recess. In the same spirit, teachers in Detroit staged rolling sickouts to protest mice, mold, and crumbling classrooms under their governor-appointed “emergency manager.”

Inside unions, the same spirit of resistance continues to boost reformers running for office, like the professional flight attendants who unseated a management-friendly president last fall and elected a rank and filer to replace her. Teachers and Teamsters alike are seeking out leaders who aren’t afraid to fight the boss. And unions from janitors in the Twin Cities to nurses in New York are proving that, especially when the community has our back, we can win.

If a comeback is in the cards, some of the essential ingredients are bubbling up in Chicago.

But building power goes beyond good tactics and technique. Unionism at its core is about taking action together.

In too many unions, officers or staff present members with: “Here’s the plan. Are you in, or are you out?” The Chicago Teachers continue to show how much better the results are when you involve everyone in the process that leads you there.

Members go to the mat because they care about what’s at stake and feel like it’s their fight. They’re part of the team steering the ship, from the shop floor to union-wide activities. The choice to be “in or out” evaporates when everyone was “in” from the beginning.

Anyone can tell when they’ve got a real say over what happens, versus just backing someone else’s plan. Chicago is proof positive of one of Labor Notes' enduring themes—that unions need a "political revolution" too.

Mark Brenner is the former director of Labor Notes and is currently an instructor at the University of Oregon's Labor Education & Research Center.
Related
Undaunted by Fines, Massachusetts Teachers Defy Strike Ban »
Chicago Teachers: Notes from a Fighting Union »
Before Your Strike Vote, Consider a Practice Strike Vote »
Seattle Teachers End Week-Long Strike »
Ten Years Ago, Chicago Teachers Gave Us All a Jolt of Hope »