Kohler Strikers Hold Out for 'a Normal Life' 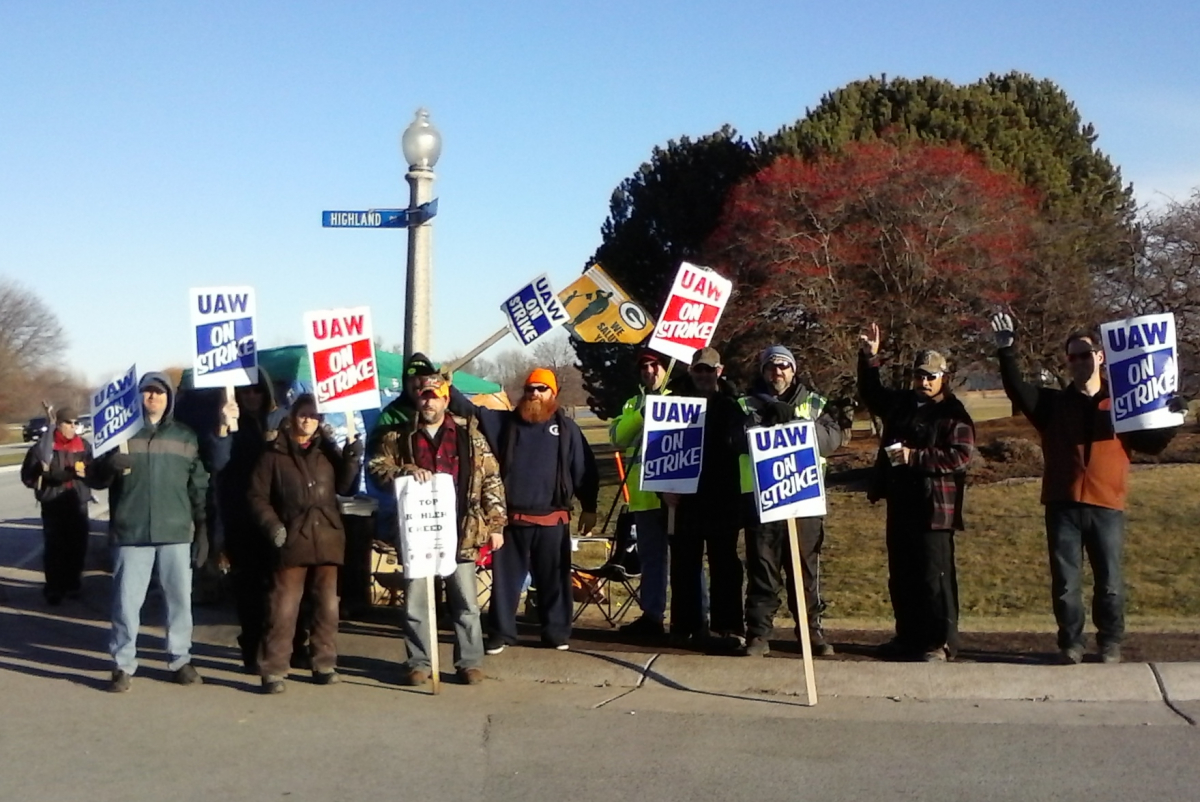 Members of UAW Local 833 are staffing picket lines round the clock during a strike at the Kohler plant in Wisconsin. Photo: Kathy Wilkes.

Two weeks after voting to strike and two days after Thanksgiving, members of Auto Workers (UAW) Local 833 are staffing picket lines round the clock near the Kohler plant in the Wisconsin village that bears its name.

It’s 35 degrees outside and sunny—in fact, almost balmy compared to what it will be when the Wisconsin winter sets in. While hopeful that the strike won’t last that long, UAW members are nonetheless prepared to tough it out.

With a vote of 94 percent in favor of the strike, only 13 of this 2,100-member local of Kohler production workers have crossed picket lines since the union and the company hit a bargaining impasse over a two-tier wage scheme that keeps newer workers (Tier B) permanently behind longer-term workers (Tier A).

Strikers are proud that 80 percent of the people picketing are “Tier A taking a stand for Tier B.” Their picket signs proclaim, “Equal Pay for Equal Work” and “94% Can’t Be Wrong.” Posing for the camera they shout, “No More Tiers!” as they wave and smile at passing cars that honk in solidarity.

Some of the most enthusiastic drive-bys have been office workers Kohler assigned to production during the strike.

“They really want to get this over with,” says Local 833 Vice President Jim Brock. Meeting up with his folks on the picket line, Brock arrived on the scene in a hurry and with lots on his mind. He turns around for a quick interview. The tier system, he says, “is just another ploy to split the workers apart.”

The local went down that road in 2010 when—against the recommendation of the negotiating committee—members ratified 2-1 a repugnant, five-year contract that imposed the tier system, a general wage freeze, and big increases in health care premiums, co-pays, and deductibles.

The economy was bad, 600 UAW members were getting laid off, and, in letters mailed to each worker’s home, Kohler threatened to outsource or offshore even more jobs if the union failed to capitulate to company demands. It was a perfect storm of panic, and Kohler capitalized on it.

Though not as blatantly as in 2010, Kohler has recently raised the specter of more layoffs as a means to be “competitive” with companies that have plants in the southern U.S. and overseas. “If the two-tier wage structure disappears,” CEO Dave Kohler warned in a recent editorial, “so do the local manufacturing jobs.”

“We’re not falling for that again,” Brock vowed. “And we’re not negotiating in the press.”

A number of strikers say Kohler is very profitable, but since it’s a privately-held corporation, hard numbers are even harder to find. Other information was easier.

The Kohler family ranks 65th on the Forbes 400 with wealth of $7.7 billion as of December 2. Their wealth nearly doubled in 12 months, 2012-2013. They are active in Wisconsin politics, according to records of the Wisconsin Democracy Campaign. Company chairman Herbert Kohler has contributed $40,000 to Governor Scott Walker. Between 2009 and 2013, Kohler-employed family members and workers contributed over $51,000 to Walker and other state officials.

The Kohlers also have ties to the conservative Club for Growth and the American Legislative Exchange Council. Both organizations have advanced antiunion legislation in the state, including the controversial Act 10, which decimated public workers’ bargaining rights, and the so-called “right to work” law that allows private sector workers to forgo payment of union dues or fees while still receiving union services.

Kohler is the fifth-richest closely-held company in Wisconsin. It controls an extensive network of operations under various names in the U.S. and abroad that manufacture kitchen and bath products, furniture, lawn tractor engines, generators, power systems, tiles and stones, and iron castings.

It also operates hotels and golf courses, and, right in the Village of Kohler, it has a luxury resort whose guests recently complained of noise from the nearby picket line.

‘STUCK FOREVER’ IN TIER B

Meanwhile, with wages as low as $11.50 an hour, Tier B workers have struggled to make ends meet. They earn 50-65 percent of the Tier A rate for the same work, depending on the job and other factors, such as shift premiums, holiday pay, and other special pay many of them don’t get.

Within Tier B, workers are either permanent or “flex,” i.e. temporary, with benefits and other extras ranging from radically reduced to nonexistent.

“They’re stuck forever.” Brock is clearly disgusted as he describes how the company “flat-out rejected” the union’s proposal for a progressive wage scale that would get Tier B to parity with Tier A in five years.

On the upside, the membership is united “more than it’s ever been.” Getting rid of the current system is “our top priority,” he says emphatically as he heads back to Local 833 headquarters two miles away.

It’s a busy place. About a half dozen members are in the parking lot cutting up donated wood intended to keep burn barrels burning and strikers warm on the picket line. Inside, several members munch on donated brats while others check people in, work the computers, or warm up with coffee from the large urns at the back of the cavernous main hall.

Eric Koene has 21 years in at Kohler and heads the union Education Committee. He says Kohler only started hiring Tier B in the last three years and now there are 400 of them “working side by side” with Tier A.

“Kohler has never agreed to them earning their way up to the top,” he said. “We offered a five-year progression. Our people understand. With training and experience, it takes time to get a good worker. But they should be at the top by then. They only get $11.50, and that’s low for this area.

“Kohler’s having problems hiring because of that. It used to be a top employer, but now people are looking elsewhere first.”

Two young women huddled together are making what appears to be a sign. On closer inspection, it’s a huge card for the family of union member Darius Wray, who died suddenly on Thanksgiving at age 34. It will bear the signatures of striking Local 833 members who will present it at a vigil, where they will take time out from their own troubles to pay their respects.

Multi-colored markers in hand, Haley Goldbeck and Mariah Mand continue their handiwork as they talk about life on Tier B.

Goldbeck looks Millennial young, and like so many of that generation, she is, at the moment, screwed. Hired in February, she’s been flex and pretty much at the bottom of the hierarchy ever since. She’s “at-will,” meaning that Kohler can end her job at any time. She has no recourse, no benefits, and no rights other than to try to transfer to another position. So far, that’s been impossible.

“In my area, I can’t even get a permanent job,” she says, somewhat exasperated. As Tier B flex, she doesn’t know from one day to the next where she’s working or if she’s working. Permanent work, even at Tier B, would at least provide a little more certainty to her life. Right now, “they can put me anywhere.” Or nowhere.

“If you come in, and they want you to paint the walls, that’s what you do,” quips Mand. Compared to Goldbeck, she’s a veteran. Hired as flex in June 2012, she eventually transferred to a permanent job, but Tier B wages and meager benefits mean her workaday woes are far from over. Competition for better-paying jobs in the plant can be fierce, and even after three years, she’s not earning enough.

“You pay your bills and have nothing left,” she says matter-of-factly.

For those still employed, five years without a raise and skyrocketing out-of-pocket health care costs have diminished their purchasing power. They have the dubious distinction of being among Wisconsin’s beleaguered middle class—the fastest-shrinking in the nation, a recent study found.

As Professor Marc Levine, who heads the Center for Economic Development at the University of Wisconsin-Milwaukee, told Wisconsin Public Radio: “It turns out the manufacturing jobs aren’t paying what they used to anymore, and a big chunk of that is because of the de-unionization that has occurred.”

Dean Gehrke feels the pinch all too acutely, even after 18 years. Laid off in 2010, he maintained his Tier A status picking up temporary work at Kohler and hoping it would morph into permanent employment. He also secured work at another company.

“I was working two full-time jobs and over 100 hours a week before I finally got called back to Kohler,” Gehrke says. “I came back to Tier A, but other people who couldn’t work temporary—they had to be sure about wages and benefits—lost their status and either came back as Tier B or didn’t come back at all.

“At first, there was some conflict between Tier A and Tier B, but as time went on, people realized this was brought on by the company.”

Reflecting on the union’s last proposal, a copy in his hand, and thinking about what Kohler has done, Gehrke is thoughtful and determined. “Anyone working full time should be able to live comfortably—to pay the bills and do the normal things that people do with a decent job.

As of this writing, Kohler has not responded to calls for its comments.

Kathy Wilkes is a longtime labor writer and editor.