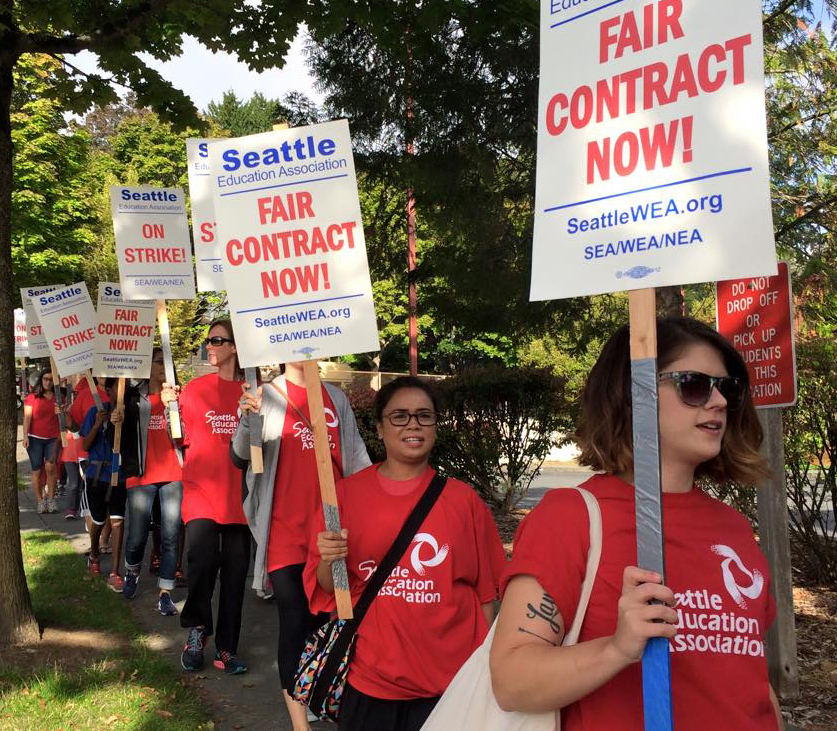 Teachers picketed at every school site in the district. They've now returned to work as they review their tentative agreement. While some were disappointed at the wage increases, they won on other important issues, including evaluations. Photo: Seattle Education Association.

After a five-day strike, Seattle teachers returned to work today as they reviewed their tentative agreement. While some members were disappointed that wage increases were not higher, they won on other important issues, including evaluations.

When the agreement was reached yesterday morning, said bargaining team member Andy Russell, chanting from supporters outside the building gave negotiators a boost. “Picketers started showing up at 5 a.m.,” he said.

Contentious issues were teacher pay, concessions demanded by the district, such as lengthening the school day without compensation, and union proposals to guarantee recess and curb standardized testing.

The settlement includes raises of 3 percent, 2 percent, and 4.5 percent over three years (members will also get a 4.5 percent cost-of-living increase from the state). The Seattle Education Association (SEA) succeeded in removing standardized test results from teacher evaluations and in establishing caseload caps for nurses and counselors.

The district was able to lengthen the school day by 20 minutes. The longer day will go into effect the third year, and teachers will be compensated with additional funds generated by a local “tech” tax.

In a far from unanimous vote, the SEA executive board recommended the settlement 17 votes to 5, and 60 percent of the delegate assembly voted yes. The ratification vote will be held on Sunday.

Russell, an elementary school teacher, was on the picket line the first three days of the strike, when no negotiations took place. “The spirit was amazing,” he said. “We had no idea it was going to be as great as it was.”

Russell said that on day one 95 percent of members were picketing and by day two it was 97 percent, on top of community support.

“Parents were coming out of the woodwork. We had students there,” Russell said.

The strike fell on the three-year anniversary of the Chicago teachers strike, which electrified teachers across the country in 2012.

Raises were a central issue. “We haven’t gotten a cost of living increase in six years,” said substitute teacher Dan Troccoli. In Washington, the state legislature determines the base teacher salary, but districts can supplement it in negotiations. SEA members wanted the district to make up for years of the state’s underfunding of teacher pay.

Russell said that although many teachers felt they didn’t get everything they wanted in the settlement, one key victory was that non-teaching staff got the same raises as teachers. In the past, Russell said, “office staff and instructional assistants were left behind and it's embarrassing that teachers went along with it.

“We made it priority number 1. We said every group will get the same raise.”

The union also got the district to agree to 30 “race and equity teams,” groups of teachers in each school who will plan how to address the disproportionate discipline of students of color. Initially Seattle teachers wanted such teams in all schools and the district would agree to only six.

The union succeeded in de-linking teacher evaluation and student performance, which is calculated in part by standardized test results. Seattle’s previous evaluation system had factored in “student growth,” including test scores, a practice many teachers say is arbitrary and unfair. Washington, unlike many other states, has so far avoided a statewide mandate to include student performance and test scores in teacher evaluation, making Seattle an outlier.

Seattle teachers had not struck the district in 30 years, since a five-week strike in 1985. They did strike for one day in May this year, in an action aimed at the state government.

The May strike was part of a wave of one-day strikes by teachers in 65 districts across Washington over the state’s refusal to properly fund public schools and reduce class sizes.

In 2012, the state Supreme Court found the legislature was violating the state constitution by refusing to adequately fund education. On August 13, the court announced that until the legislature complied, it would begin imposing fines of $100,000 a day. In past years the legislature had cut funding despite obligations to increase it.

Seattle teachers struck May 17, just as negotiations were beginning. The district, in part willing to allow the teacher protest over much-needed state funding, closed school for the day. Teachers picketed at high schools and then marched downtown, where they were joined by other districts in a crowd of 5,000.

The one-day strike offered a dry run as union members were starting their contract campaign, this time with a larger, more representative bargaining team of 40 members. “It trained people who had never struck what it’s like to walk the line,” Troccoli said.

In the settlement, the two sides agreed to guarantee 30 minutes of recess in all schools. Troccoli said the union’s initial proposal of 45 minutes was in concert with parent protests that schools have been cutting into students’ free time to make way for test prep. Teachers and parents say this disproportionately impacted schools with low-income students of color.

A study by University of Washington researchers found Seattle students had 12 minutes on average of seated lunchtime, and that no school had as much as 20 minutes. “It’s crazy: you either have kids who are foregoing lunch to run around outside or they are just staying in the lunchroom,” Troccoli said. “It’s problematic on both sides.”
Teachers have worked to build relationships with community groups. The movement to opt out of standardized tests built alliances between teachers, the Seattle NAACP chapter, and parent groups such as Parents Across America.

Garfield High teachers won national attention three years ago when they boycotted a mandatory exam, causing the district to make it optional. In the settlement, the district agreed to a joint union-district committee that will review the standardized testing schedule.

PTA member Ljiljana Stanojević-Peñuela organized strike support through the Facebook group Soup for Teachers. In less than a week, the group grew to 1,300. By the strike's end it had 2,800 members.

Stanojević-Peñuela said she supported the union’s fight to protect recess, along with its wage proposals. “Is it fair? Yes,” she said, pointing to Seattle’s development boom and rising rents. “It’s harder to live in Seattle on a teacher’s salary.”

Soup for Teachers brought food to locations near schools, working with rank-and-file strike captains. “This is a completely parent-run thing,” Stanojević-Peñuela said.

As teachers went back to work, Russell said the union's focus will be on bringing in more state funding and that the strike, which didn’t win everything, got new teachers involved in the union. Russell said the picket captains at his school were second- and third-year teachers.

“This is just the tip of the iceberg,” Russell said. “We have energized a whole new generation of teachers.”

Good article ! Part of the background to the strike is the 7 year work of a rank and file caucus, the Social Equality Educators. They have been working to get the union to take a stronger stand on issues of racial justice and in opposition to Corporate Education Deform ( merit pay, high stakes testing, privatization etc.) They were instrumental in spreading the MAP test boycott which helped lay the basis for the strike. Also very influential was the example of the Chicago teachers strike in 2012. SEE is part of a national grouping of progressive rank and file caucuses with CORE in Chicago. SEE elected several SEA Board members and almost won the union's presidency in the last election. One other example of massive solidarity with the strike: On Sunday Sept 13, The Coalition for Schools Seattle Deserves which formed to support the teachers' strike held a benefit concert that 700 people attended and raised over $8000 for the SEA hardship fund.