Back to School with Work to Rule in Ontario 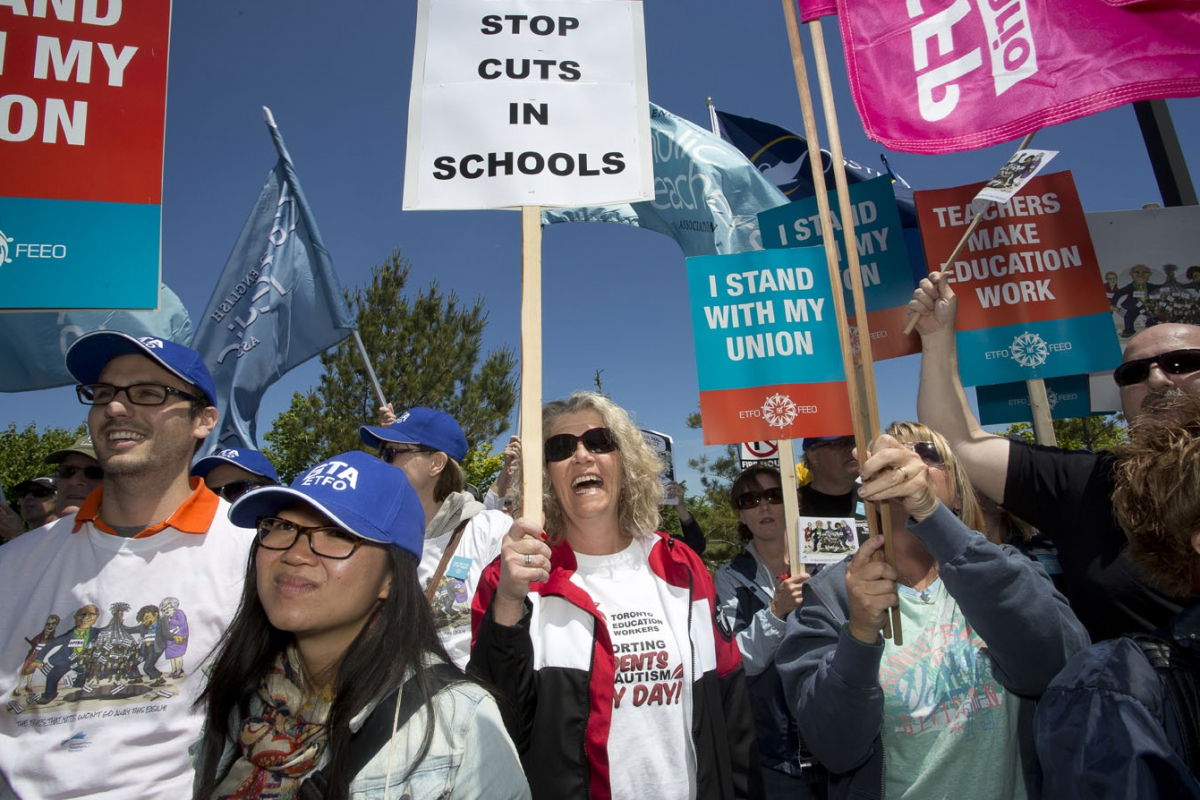 That includes all the teachers in the English, Catholic, and French school systems, all publicly funded.

Since last August, all Ontario’s public school teachers have been without a contract. The majority had their last contract imposed unilaterally in 2013 by provincial legislation. It froze wages, provided for mandatory unpaid days off, and cut paid sick days in half.

As the deadline nears, events are developing quickly. Today the Secondary School Teachers (OSSTF) announced a tentative agreement with the province and school board association—though this provincial agreement still needs to be ratified by members, and local agreements hammered out.

Meanwhile, elementary teachers announced today that they will escalate the work to rule they began last spring. And Catholic teachers began job actions today in districts where school is already underway.

In this round of bargaining, the unions signaled early that they would accept no more attacks. Unions are shocked at the deep concessions the Ontario Public School Board Association is demanding, such as removing hard-won local caps on class sizes.

“The class-size issue has become the rallying cry of members across the province,” says Domenic Bellissimo, director of political action and communication for the Secondary School Teachers.

Bargaining has been stalled under a new structure brought in this year. In the past, all bargaining was between local school boards and union districts.

Under the new system, issues such as performance appraisals are still negotiated locally. But bigger issues—notably salaries and class sizes—are negotiated centrally with the province and the association for the English public schools. (The Catholic and French systems have equivalent associations.)

For elementary teachers, the association is demanding that principals wield more control over teachers’ prep time. It also wants to increase the time teachers can be required to supervise kids, such as during lunch breaks.

“If prep time is controlled by principals, when do we plan? When do we do any kind of prep? What happens to the quality of teaching?” asks Esther Ashby, a special education teacher in Toronto and a steward with the Elementary Teachers (ETFO).

Wage freezes and eliminating regulations on seniority-based hiring are also on the table.

The current Liberal government campaigned on reinvesting in education. But it’s taken a tough stance with teachers.

The government is making schools the scapegoat for its financial woes, says Ann Hawkins, president of the English Catholic Teachers (OECTA): “You can’t have the education system keep taking the cuts, without the cuts affecting the classroom.”

That’s nothing new in Ontario. “Premiers have repeatedly gone to public sector workers to try and find savings wherever they could,” says Bellissimo.

Unfortunately, the attacks cross party lines. In fact, it was a provincial government run by the New Democratic Party—left-of-center social democrats—that launched the first volley in 1993, imposing wage freezes and furloughs on the public sector.

Next, Conservative Premier Mike Harris waged an all-out assault. He slashed the education funding formula, merged school boards, wiped out contracts, and even legislated an increased workload for teachers.

These changes “sucked billions and billions of dollars of out of the system,” says Jason Kunin, a Toronto secondary school teacher active in his union’s District 12.

The Liberals now in power, Bellissimo says, have zeroed in on “demanding concessions and stripping away benefits from educators” in particular.

It’s in this context that unions are threatening “administrative strikes” and escalating work to rule if there’s no deal by September.

What does work to rule look like? For elementary teachers, who began an action across the province in May, it meant not completing the piles of administrative paperwork that have been added to teachers’ workload.

The goal was to put pressure on administrators and the government to push the school boards, while minimizing the impact on parents and kids.

“We looked at the issues that are really affecting teachers around Ministry [of Education] initiatives,” said John Smith, president of the Elementary Teachers’ Toronto local.

“We stopped doing things that the Ministry demanded—like standardized testing, which in fact made teachers really happy.”

With wide teacher participation and good parent support, the work-to-rule action was “incredible,” Smith said. “It really pissed off the Ministry.”

In the second phase, announced today, Elementary Teachers will also sit out field trips, open houses, fundraising, and answering non-emergency emails from the principal after hours.

Secondary school teachers began job actions this summer, and announced they would ramp up in September if there was no deal.

“We’re going to be striking pieces of the job that don’t hurt kids, but frustrate managers to the hilt.”

Secondary school teachers also threatened to withdraw from extracurricular activities—which are harder to give up. Most teachers love this part of the job.

At the low-income school where Ashby teaches, the extracurriculars offered voluntarily by teachers are often the only ones kids have access to. They include computer, cricket, and knitting clubs, and community food drives teachers organize.

“You feel bad taking away from kids. It’s heartbreaking,” she says. “But what I keep reminding other teachers is if we are strong in these small things—if we can be firm when it’s work to rule—it saves a lot more heartache.”

“They put us in the position where we really have no choice,” Hawkins says. “Members need to know the association is going to protect them to the best of our ability. If that means work to rule, that’s the direction we’ll be going.”

One reason teachers are choosing such creative tactics is that the provincial government is quick to impose contracts and shut down strikes.

When secondary school teachers in three districts struck this spring, the Ontario Labour Relations Board declared the strike illegal and ordered a return to work—and the province reinforced the order with legislation.

“We could all walk out and stay out until we get what we want,” says Kunin, “but it’s not going to work. They can just legislate us back to work, and if we don’t go they can fine us each $2,000 a day and bankrupt us.

“You can’t just violate the law if you don’t have a massive grassroots movement behind you, and we don’t.”

To escalate from here, there’s talk of coordinating strategies among the teacher unions, including possible one-day strikes in the fall.

But union leaders say it will take a delicate balance to have an impact while maintaining community support and not pushing the Ministry to the point of legislation.

During 2012-2013 negotiations, teachers were skewered in the press as over-entitled and fighting for benefits many others didn’t have. It was hard to find public support.

“The media frames the stories,” says Kunin, “and the public is really only engaged if they have kids in system.”

So the unions have devoted resources to careful messaging. They’re focusing on class sizes and prep time, rather than salary demands. The English Catholic Teachers launched a website, teachersmatter.ca, and Secondary School Teachers have taken out ads asking parents to call the school board and demand class sizes not increase.

But beyond communication strategies, “we really need to be building local community connections with parents,” Kunin says, “so that in situations like this, we could call on that grassroots support.”

Smith, inspired by the Chicago Teachers, calls it a new way of thinking about bargaining. “The old system doesn’t work,” he says. “We need to get our communities on our side.”

He believes the public’s reaction over the 2012-2013 fight highlighted how the union had neglected such organizing: “Why do we expect support from low-wage workers who don’t get sick days, when we haven’t done that work [to build alliances]?”

Looking to the long term, the Elementary Teachers local in Toronto has started a community outreach committee. The union is building a database of supportive parents by tabling and participating in local events. And it’s encouraging teachers to join community organizing efforts such as a safety campaign in the Lawrence Heights neighborhood.

Meanwhile, the threat of work to rule is having some impact. It’s forced Ontario’s premier to intervene by calling all the parties to a July meeting, and it’s pushed the school board associations back to the table. All of the unions have returned to bargaining or have further dates set.

Special education teacher Ashby hopes negotiations resume in good faith. But if needed, she believes teachers will stick together.

She reminds younger colleagues that it hasn’t been that long since teachers had no guaranteed prep time, and had to quit when they had a baby. What changed all that? “The strength of unions.”

Sonia Singh is a staff writer and organizer with Labor Notes.sonia@labornotes.org
Related
Minneapolis Strikers Demand a Living Wage for the Lowest-Paid Educators »
Richmond Educators Are First In Virginia to Win Bargaining Rights »
Twin Cities Teachers and School Employees Gear Up for Strike »
As Omicron Rages, Teachers and Students Fight for Safety Measures in Chicago and Elsewhere »
Teachers Strike against a ‘Heartless’ School Board in Biden’s Hometown »