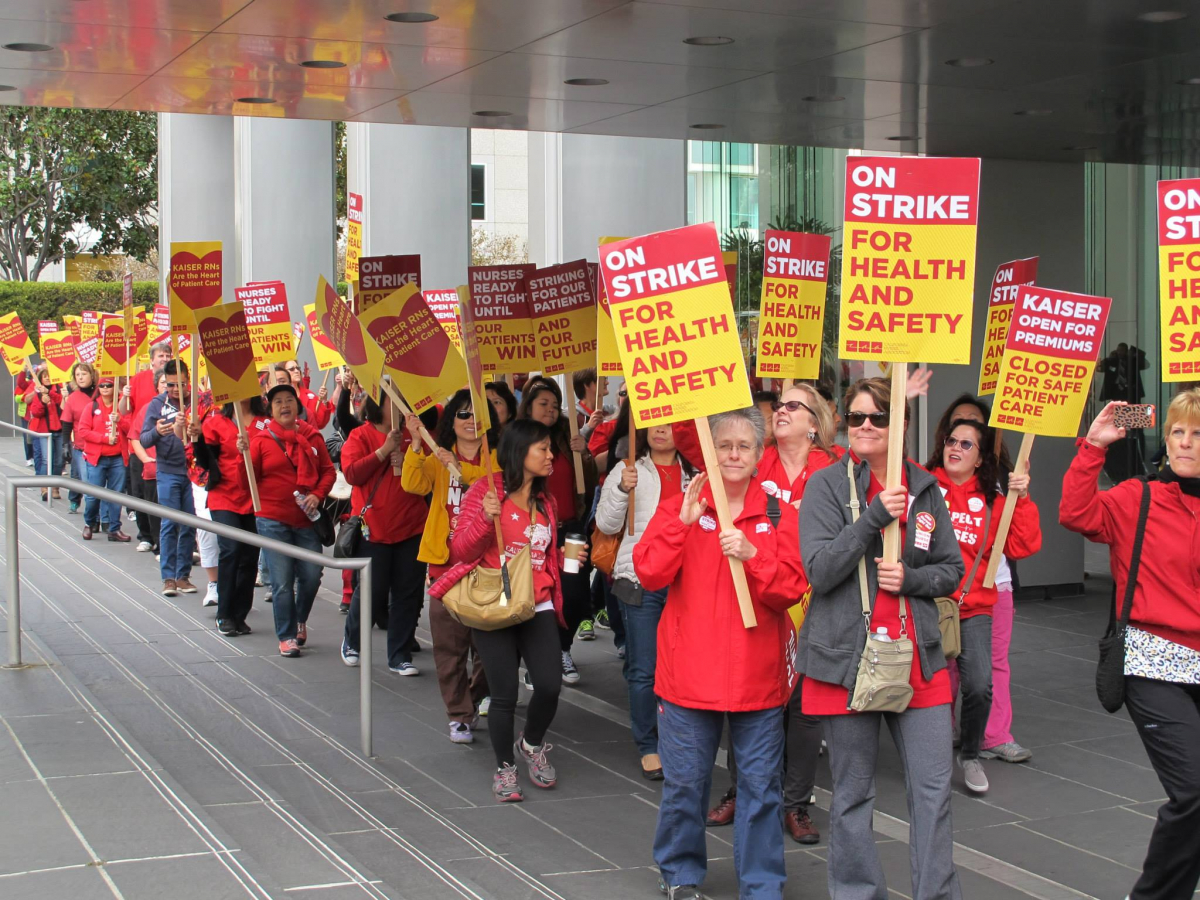 It’s this year’s biggest private-sector bargaining, between the Kaiser Permanente system and a coalition of 28 locals representing 100,000 health care workers.

But the national deal, due June 4, may reveal widening cracks in the celebrated labor-management partnership that turns 18 this year.

Coalition unions declined to comment on the substance of negotiations. A joint website with Kaiser, bargaining2015.org, presents a smooth PR face, with bland quotes praising the process and snapshot slideshows set to music—but no reports of what’s been tentatively agreed so far.

One negotiating session, June 2-4, is left before the scheduled deal. Delegates would vote June 16-17.

When the partnership was hammered out in 1997, the union position was strong. Kaiser’s finances were in bad shape, and labor wars weren’t helping—motivating the company to accept a truce.

The impressive contracts that followed seemed to bear out the promise of collaboration—setting an industry standard for benefits, keeping turnover low, giving workers a structured voice in everyday decisions, and contributing to Kaiser’s rising reputation for good patient care.

But times have changed. Now the technically nonprofit Kaiser is making money hand over fist. Its latest financial statements show profits of $1 billion in just the first quarter of 2015.

Meanwhile the coalition is weakened by feuds and an antiunion climate—and out of practice at militancy. And it looks like Kaiser is testing how much bad behavior it can get away with.

“Kaiser Permanente has made troubling changes in the way it treats its health professionals,” says Food and Commercial Workers (UFCW) Local 400 in an April web post, “bringing in managers lacking experience in a union environment, disregarding the terms of the collective bargaining agreement, and focusing more on profits than the well-being of its employees and patients.”

The union wouldn’t comment further. But in a federal suit it alleges that Kaiser is refusing to arbitrate or even meet over 59 outstanding grievances.

Some local leaders must be asking—is this partnership broken?

The biggest member is United Healthcare Workers West, the California local that’s been a magnet for controversy since its parent, the Service Employees (SEIU), trusteed it in a 2009 power grab.

Sophia Walker, a ward clerk/transcriber in Labor and Delivery who’s put in 26 years at Kaiser, served on UHW’s bargaining committee last time around. The experience left a bitter taste in her mouth.

It felt like a charade, she said, “to make [members] believe they had some input”—but at the end, there was “stuff in writing that we hadn’t even discussed.”

She concluded the real bargaining must have happened behind closed doors. “How do they have the date set, if they don’t already know how it’s going to go?”

The approach is “interest-based problem-solving,” where the two sides try to find common interests and minimize confrontation. This year’s subgroups are “Operational and Service Excellence in Partnership,” “Total Health and Workplace Safety,” and “Work of the Future.”

“What happens is, let’s say I’m put in a group,” Walker said. “Everybody at the beginning has to throw out topics… Then everybody has to vote, out of those 20, which is most important. They may tell you you can just pick three. And if the majority of people don’t pick that issue, it just goes out the damn window. It never gets addressed.”

In the worksites, Walker says, UHW isn’t running any contract campaign at all.

“If you were to walk into any Kaiser right now and say, ‘Are you guys bargaining?’” she says, “the majority would say ‘I don’t even know what you’re taking about’ or ‘I don’t know.’ That’s the truth.”

The national deal covers wages and benefits, but separate local pacts run the gamut of day-to-day topics such as work rules, attendance policies, or whether the hospital can cancel your shift at the last minute.

The national pact will decide across-the-board whether to hold local bargaining this year. Unions in some regions want it; others don’t.

But savvy locals are preparing. In the Northwest, the Oregon Federation of Nurses and Health Practitioners and SEIU Local 49 have done sticker days and postcards, building toward joint rallies in June.

OFNHP’s leadership recently turned over. The union hasn’t run a contract campaign like this in Kaiser worksites before. But the union just scored a coveted win on staffing: in exchange for going to all eight- and 12-hour shifts (no more 10s), Kaiser agreed to nurse-to-patient ratios at a local hospital.

Though UHW dominates, even in California the coalition isn’t a monolith. Walker said she learned the bargaining dates from the United Nurses Associations of California, which plans a rally June 3.

For the resolutely non-coalition unions, negotiations with Kaiser have a very different flavor. All three have been out on strike in the past year.

The biggest is the California Nurses Association, with 18,000 Kaiser members. Last year, bargaining’s start was delayed when the employer wouldn’t even agree on the location, said President Zenei Cortez.

Nonetheless, CNA reached a settlement in January, averting a planned second strike—to the consternation of its smaller sister, the National Union of Healthcare Workers.

NUHW formed as a breakaway after the trusteeship of UHW, and warred with it for members. The upstart now represents 3,500 Kaiser workers, who’ve battled for a contract ever since.

On the nurses’ top issue, staffing, CNA’s deal strengthened its enforcement power, Cortez said. And for this contract at least, they staved off the two-tier pension.

The nurses did agree to increase co-pays to $20 in 2017, she said, and to start paying part of the cost of retiree medical. But in exchange, Kaiser agreed to contribute an additional 1.25 percent of nurses’ gross income into 401(k) accounts for medical expenses.

“Total Health”—the controversial wellness plan the coalition unions accepted in 2012, where employees get financial incentives for filling out surveys giving Kaiser data about their personal health—was a non-starter with the nurses.

“We refused to be a part of that,” Cortez said. “Because my health is my own decision. It’s my private life.”

Another 1,900 Kaiser workers in Hawaii, members of UNITE HERE Local 5, are also still fighting for a deal. They struck most recently in February for six days.

Secretary-Treasurer Eric Gill says the health care giant is even “more recalcitrant than the biggest corporations we deal with, hotels and banks.”

Kaiser is awash in new patients. Enrollment in its health plan is booming, thanks to the Affordable Care Act.

Members have tried everything, including repeated strikes, to push the issue to the fore.

“They [Kaiser] get a lot of mileage out of their rhetoric that they really listen to and value their employees,” says Clement Papazian, rank-and-file president of the union’s Northern California Kaiser psychiatric chapter. “Nothing could be farther from the truth, in our experience.”

Ignored by the company, members finally took their complaints to California’s Department of Managed Health Care, which backed them up—citing Kaiser repeatedly and fining it $4 million.

Kaiser’s response is to punish those who speak up. In May, NUHW members picketed to protest the firing of whistleblower Dr. Alex Wang, who’s been speaking out against long wait times for mental health patients.

“We’ve gotten this rhetoric directly from executive-level management: ‘We do not want to reward employees for the behavior of the past three years,’” Papazian said. “It’s jaw-dropping hypocrisy, given the philosophy of the labor-management partnership.”

CORRECTION: The sentence "Coalition unions declined to comment." has been revised to clarify: "Coalition unions declined to comment on the substance of negotiations." A coalition spokesperson contacted for this article declined to be interviewed, requested written questions, and responded to a detailed list of questions with a short written statement. The statement said that the coalition would not comment on the specifics of the talks but intended to negotiate a strong contract, expected to reach an agreement on schedule but could not guarantee it, has many mechanisms for resolving worker issues, and like all unions, relies on the engagement of its members.

A version of this article appeared in Labor Notes #435, June 2015. Don't miss an issue, subscribe today.

Alexandra Bradbury is the editor of Labor Notes.al@labornotes.org
Related
UPDATED: Alta Bates Nurses Revolt »
Kaiser Strikers Insist You Should Be Able to Get an Appointment When You Need It »
After Strike Threat, Wisconsin Nurses Get a Possible Path to Union Recognition »
Wisconsin Nurses Set to Strike, As Employer Claims It's Banned from Bargaining »
Kaiser Clinicians Strike against ‘Separate and Unequal’ Mental Health Care »