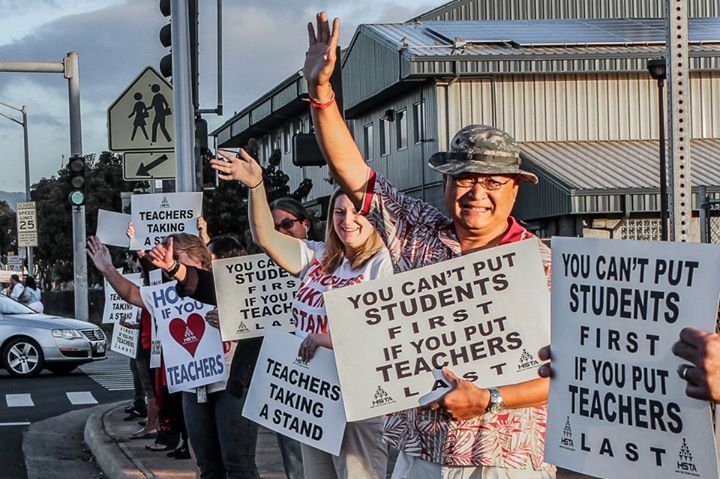 Hawaii teachers carried out work-to-rule actions across the state in 2012, calling attention to low pay and overwork. Photo: Hawaii Teachers Work to the Rules.

Remember the Hawaii teachers who in 2012 led a statewide work-to-rule campaign against low pay? This spring they won the top three spots in the Hawaii State Teachers Association—but the union’s board of directors is refusing to let them take office.

The board has kept the vote results secret, citing vague irregularities—and ordered a new election.

Teachers Corey Rosenlee, Justin Hughey, and Amy Perruso ran for president, vice president, and secretary-treasurer of the 13,000-member statewide local. They were backed by a reform caucus, Hawaii Teachers for Change.

Votes were cast April 13-24, and the results were supposed to be certified May 4. But board members delayed announcing the outcomes—claiming they were waiting for runoff results for the vice presidency, since no candidate for that post had won a majority.

The union’s elections committee certified the tallies. But after the May 15 runoff, the board voted not to certify results for any post.

“They basically rejected the results because they didn’t like them,” said Perruso, a high school social studies teacher in Oahu. “That’s not a legitimate way to run a union.”

Vice President Joan Lewis and Secretary-Treasurer Colleen Pasco, running for president and vice president, were among the board members who voted to toss the election results. In a press release, the winning candidates point out that HSTA by-laws prohibit members of the board whose elections are challenged from voting to reject the results of an election.

Rosenlee, Hughey, and Perruso each won by more than 150 votes, according to their press release. The incumbent slate’s third candidate, Osa Tui, publicly acknowledged that Perruso beat him, and has withdrawn from the secretary-treasurer race.

Three days after the board meeting, in an email to union members explaining the decision, the board majority claimed that “many” members said they hadn’t received email or paper ballots, and that there’d been possible ethics violations about where in schools the campaign materials were put.

The Teachers for Change slate is pursuing a legal challenge to the decision, arguing that tossing the results violates the union’s own rules.

Their supporters have started an online petition and a hashtag, #tellusnow, to build pressure on the board to come clean about the numbers and respect the outcome.

The board has announced a “three hour walk-in only” revote on June 2—one day before summer break at most Hawaii schools. Rosenlee said the new election format is intended to discourage turnout by making teachers travel to vote at a time when they would ordinarily be picking up their kids, grading year-end assignments, or supervising graduations.

Perruso said the board’s decision reflects the problems that led her group to run in the first place: they’re out of touch with members and make decisions behind closed doors.

At the union’s most recent convention, she said, Hawaii Teachers for Change delegates spearheaded supported several resolutions that members voted up, including one to push for smaller class sizes.

But the board, at its discretion, either ignored or voted not to adopt those resolutions.

The challengers campaigned on turning the HSTA into a more activist union whose members fight for teachers and students, following the model of Chicago and Los Angeles.

Rosenlee, Perruso, and Hughey based their run on the support they’d generated in a month-long work-to-rule campaign. It started at Rosenlee’s suburban Honolulu high school in 2012 and spread to over 100 schools across the islands.

Organized outside official union channels, the grassroots action aimed to draw attention to Hawaii teachers’ low pay and overwork. It made national headlines.

One day each week, teachers would work only their mandated hours, from 8 a.m. to 3 p.m. Before school they would gather outside, wave signs, and talk to parents. Then just before 8, they would march in.

When the school bell rang at the end of the day, they would march back out, rally again, and end their workday—skipping the hours usually devoted to afterschool activities and lesson planning.

These protests came after the governor imposed a contract on teachers, after years of stalled bargaining. Hawaii has the U.S.’s only statewide school district.

Besides building public support, the activists were also trying to push their union to wage a stronger campaign when their contract next expired in 2013.

“That stemmed from teachers’ frustration,” Higa said. “[Union] leadership was saying we just have to wait.”

Later Rosenlee and other teachers organized around local school issues such as the need for air conditioners. Hawaiian classrooms can be sweltering year-round, sometimes reaching 100 degrees.

Low pay is a central issue. The Hawaii Teachers for Change candidates say the district’s salaries, which start at $33,000, are too low to recruit and retain teachers. Hughey works a second job as a waiter.

The reformers are also calling for the elimination of the state’s new “Educator Effectiveness System,” where teachers’ evaluations and pay are linked to students’ test performance.

They want to make their union more open by involving members in bargaining—and all union activities—rather than cutting deals behind closed doors, like previous leaders did.

“We need new leadership,” said Higa. “This is all making our union look bad. Whoever won the election should just be announced.” If the vote is rerun, she vowed to continue campaigning for the Hawaii Teachers for Change team.

Higa hopes HSTA members can follow the wave of teacher activism happening in other parts of the country. “We looked to Chicago and we saw what they were doing,” she said.

“We need to figure out ways to get members more involved. We are trying to have a more organized union.”

A version of this article appeared in Labor Notes #435 June 2015. Don't miss an issue, subscribe today.