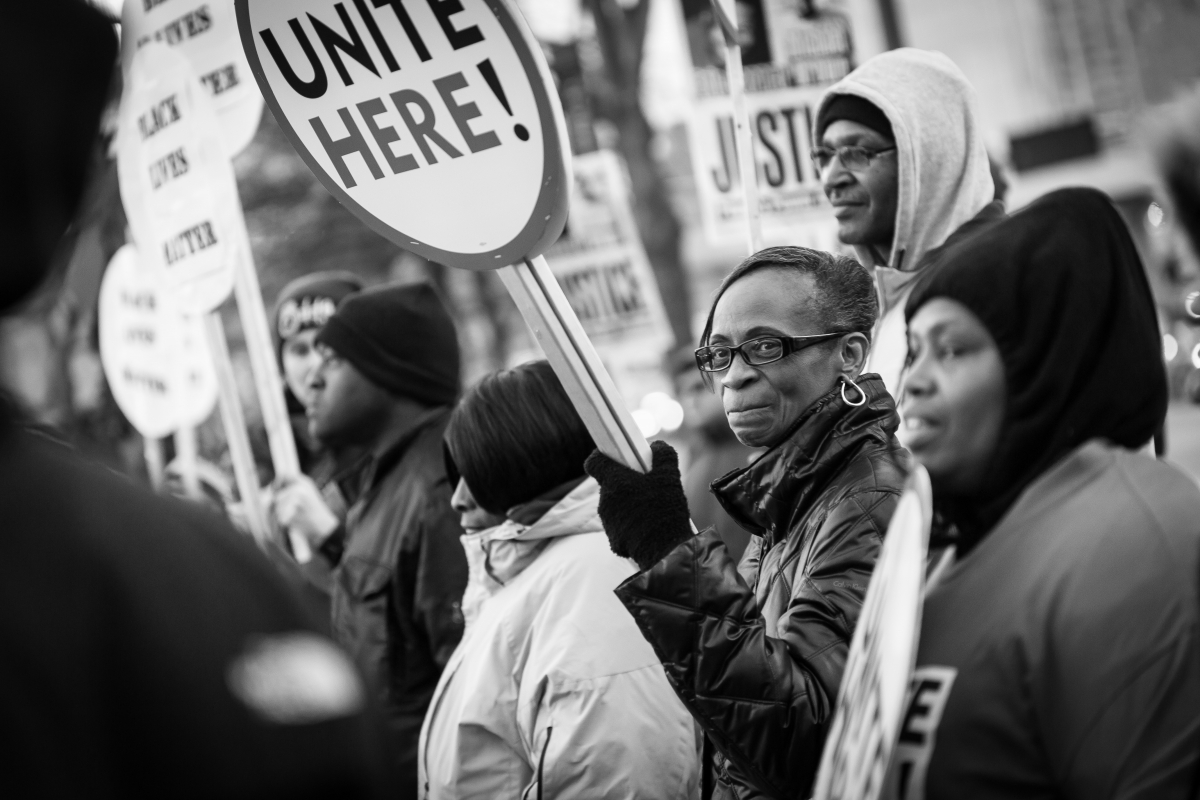 Baltimore erupted after the killing of Freddie Gray.

The crisis has laid bare a city strained beyond human capacity by inequality and police violence. Public policies have created islands of wealth and comfort, surrounded by a sea of service cuts, hyper-policing, and degrading poverty in which most of the city is drowning.

It’s those policies that gave rise to the police violence that ended Gray’s life—an extreme example of the injustice that people here are facing every day.

What’s unusual about this moment is that, through their own extraordinary effort, Baltimore’s poor people are being seen and heard. The same pundits who usually focus on how to bring more wealthy people to Baltimore and push the poor out to the suburbs are now talking about how to grapple with savage poverty, hyper-policing, and state violence.

“The murder of Freddie Gray was like a boomerang,” says West Baltimore resident Randolph Ford, “flipping the status quo around to where the unity of the people and the fight for social justice has strengthened.”

Ford is a leader in United Workers, a Baltimore-area worker center. Through the Fair Development Campaign, our group and others in the labor movement here are calling for a new kind of development.

The protests over the killing of Freddie Gray, primarily in West Baltimore, lasted weeks. A number of unions in the city participated in solidarity, including UNITE HERE Local 7, Service Employees (SEIU) Local 1199, and our members and staff.

Dr. Martin Luther King, Jr., with his unfailing insight, described riots as “the language of the unheard.” It’s still true.

The uprising here was fueled by people’s deep need to have power over the decisions that affect their lives—including water cutoffs, crises of housing and jobs, and police violence. Baltimore is suffering from a breakdown of its ability to meet residents’ basic needs.

Sixty-two percent report they can’t find a living-wage job. Families live in homes with no lights, in neighborhoods where the schools, parks, and recreations centers are all shutting down.

You can see the city’s suffering in the rows of boarded-up homes, representing a development policy that creates “winners and losers” and concentrates wealth in a few hands.

Many of our members live where the uprising occurred. They go to work in low-wage service jobs that were produced by state funds, in places like the Inner Harbor, the waterfront tourist area.

These jobs are cruel substitutes for the high-wage union jobs in steel and other industries that Baltimore once offered.

DAMNED IF YOU DO…

A number of our members are homeless—sometimes despite working two jobs. They face police harassment for being homeless, Black, or poor. And of course, once police intervention turns into a formal record, you’re banned from the few jobs that might have alleviated your poverty.

Instead of creating real jobs, political leaders offer our people training for jobs that don’t exist, and refuse to back local hiring mandates. Mayor Stephanie Rawlings-Blake has gone so far as to describe such mandates as “illegal.” So people train and wait, and train and wait… and in the meantime barely scrape by.

Their only choices are part-time, seasonal service jobs at $7 an hour—or engaging in an underground economy. For many Baltimoreans, illegal activities like selling drugs are among the few options available for putting food on the table.

That means it’s the police who are tasked with keeping the unjust order in place, harassing and arresting people for subsistence crimes—without offering them a viable alternative.

“The police protect the wealth and their property,” Ford says. “Police see us as a threat to their role as protectors of the status quo.”

The campaign includes youth, labor, and faith groups. It demands a whole new approach to development, placing human dignity and needs at the center of public policy.

United Workers has a history of organizing against unjust development. In Camden Yards, we won a living wage and the right to organize a union. At the Inner Harbor, we fought systemic workers’ rights abuses, including violation of the federal WARN Act, which requires two months’ notice for mass layoffs. And in Curtis Bay, we eroded financial support for a proposed trash-burning incinerator project that would have harmed community health.

Our current campaign links housing with living-wage jobs, calling for a $200 million municipal bond to fund a vacant housing initiative.

The initiative would start by rehabilitating at least 3,300 of the city’s 40,000 vacant homes, employing residents to turn these degraded structures into permanently affordable housing. The bond would also fund community infrastructure such as parks, recreation centers, and solar installations.

All this would be controlled through a “community land trust”—a nonprofit that holds land for the benefit of a certain neighborhood or community. The idea is to build residents’ equity without instability or speculation.


We’re also organizing to make development accountable. That means that all public subsidies for development must create good jobs. They must ensure work with dignity, securing the right to organize. And where relevant, they must offer permanently affordable homes for working-class people.

For years United Workers has been advocating that the city require all developers to sign community benefit agreements.

Developers must not be allowed to poison our communities. We’ve worked with youth organizers in Free Your Voice to organize residents to stop dangerous projects, such as the plan to put the nation’s largest trash burning incinerator next to a city high school and elementary school. And we’ve been fighting for accessible reports on how the city uses our money.

Resolving the present crisis will take “a new and greater commitment to secure economic justice for all of Baltimore,” says Michael Coleman, another leader in United Workers. “What is needed is for all of us to take a step towards each other, and come to terms with the crisis of inequality that has brought our city to this moment.”

Todd Cherkis is a leadership organizer and co-founder of United Workers, based in Baltimore.

A version of this article appeared in Labor Notes #435, June 2015. Don't miss an issue, subscribe today.
Related
A Life in Transit: ‘What You Can Get Is Set by How Far You Are Prepared to Go’ »
When Workers Swapped Segregation for Solidarity »
Minneapolis Strikers Demand a Living Wage for the Lowest-Paid Educators »
Chicago Passes Union-Backed Bill for Civilian Oversight of Violent Cops »
'We Took Care of Each Other': A Maritime Union's Hidden History of Gay-Straight and Interracial Solidarity »