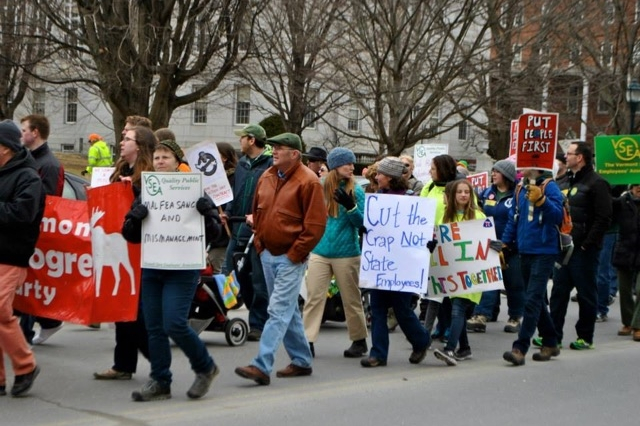 When the governor announced in December that he was pulling the plug on Green Mountain Care, national opponents cheered. “By admitting that single payer will make health care both more expensive and less efficient,” crowed the Wall Street Journal, “[Shumlin] has shown other states what not to do.”

The health care law had stipulated that the governor’s funding plan must be equitable, with business and the wealthy shouldering their shares.

As University of Massachusetts economist Gerald Friedman put it, “Peter Shumlin was scared of raising taxes on business and the rich.”

The Democratic governor and Democrat-controlled legislature are pushing steep budget cuts, too.

Turns out Shumlin really meant what he’s been saying all along—that he’s a fiscal conservative—despite the wishful thinkers who held out hope that he was just saving his political capital for health care.

The sense of betrayal runs as deep among state workers and teachers as it does among health care campaigners.

Cuts would hit libraries, prison education, low-income weatherization and heating assistance, and services for veterans and people with disabilities. Public schools would be shuttered, and arbitrary caps imposed on local education spending.

“Those needing 911 dispatching will lose,” says Vermont State Employees Association staffer Adam Norton. “At-risk children will lose. Homeless Vermonters will lose. Vermonters with mental disabilities will lose. The losers will be all the people who rely on public services.”

Written into the budget bill is a threat to continue the same assault next year.

Meanwhile, the governor is strong-arming VSEA to open its contract to $10.8 million in givebacks. If the union doesn’t make major concessions, he’s threatening 345 layoffs by July 1.

“Today the state employees said ‘just raise taxes on hardworking Vermonters,’” Shumlin told a reporter after an April 11 rally. What the VSEA and others have actually proposed is ending tax breaks that primarily benefit the rich.

Vermont’s effective tax rate on the wealthy has declined for decades, so taxes take a smaller percentage of income from those at the top than from those in the middle and bottom.

The governor and anti-labor Democrats are also working with Republicans on a bill to ban teachers’ strikes. Vermont NEA spokesperson Darren Allen called it the “most anti-union, anti-labor, disrespectful-to-teachers bill we’ve seen in Vermont.” The legislation was defeated in the House, but the Senate is working on resurrecting it.

Several hundred frustrated health care reform advocates showed up at the governor’s January 8 inauguration in Montpelier—and they weren’t there to applaud.

Instead they staged a sit-in at the state capitol, chanting and singing, unfurling banners and refusing to leave...

Given this siege, it’s no surprise that labor’s relationship with the Democratic Party is more strained than ever before.

Unions here are drawing the conclusion that we need to run our own candidates. The existing Vermont Progressive Party, which now has nine state legislators, could become the vehicle.

And in the face of these assaults, Vermont’s labor movement is showing new energy. Winning strikes by Burlington bus drivers last year and FairPoint telecom workers this year have made people more confident.

Members are coming out who’ve never been to a demonstration before. Five hundred marched through the state capitol April 11 against the budget cuts, carrying signs like “My back hurts from balancing the budgets.” Momentum is building for a bigger demonstration on May Day.

State employees have “given up wages, they’ve given up benefits, they’ve taken freezes, furlough days,” says VSEA’s Doug Gibson, “and frankly they’re tired of it now.” The union’s current campaign is called Fight Back! Save Our Services! It involves worksite meetings, petitions, mass lobbying, and pickets at the governor’s public events.

To put universal health care back on the agenda and tax Vermont’s rich, it will take more than lobbying and rallies. It will take collective action in our workplaces, and yes, a party of our own. The legislature adjourns in mid-May—but we’re in it for the long haul.

Traven Leyshon is part of the leadership teams at the Vermont AFL-CIO and the Vermont Workers’ Center.

A version of this article appeared in Labor Notes #434, May 2015. Don't miss an issue, subscribe today.
Related
Will Urgent Care Doctors Be Forced to Strike in a Pandemic for the Right to Go Home? »
With City's Economic Future in Doubt, Can New York Unions Stop the Cuts? »
Understaffed and Unsafe, Bay Area Hospital Workers Strike »
On Medicare for All: Fight for What We Want, Not What We Think We Can Get »
It’s (Way Past) Time to Redistribute Obscene Police Budgets to Schools, Hospitals, and Buses »