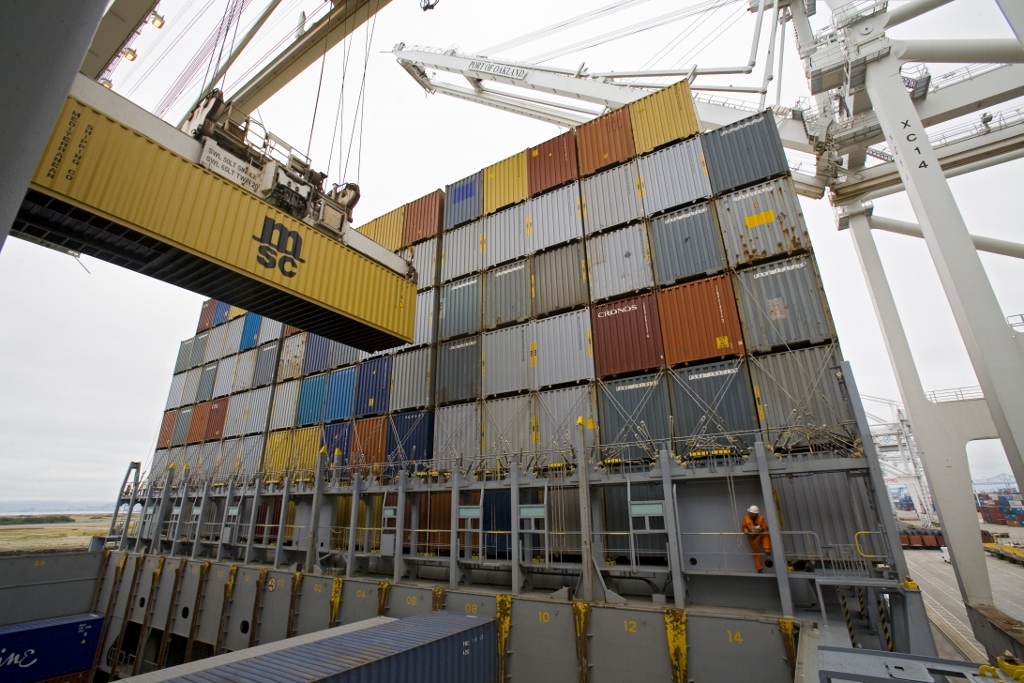 A longshore worker at the Port of Oakland. The ILWU is in a standoff over their container contract. Photo: Jim West, jimwestphoto.com.

The new year brought fresh tensions to the West Coast waterfront, where negotiations are stalled between 20,000 longshore workers and the major shipping companies.

Employers are screaming over container congestion that has ships stacking up outside ports up and down the coast. They accuse the longshore union (ILWU) of running job slowdowns and “working to rule” since November.

Terminal operators have zeroed in on a shortage of yard-crane operators as the prime culprit clogging container storage areas and causing substantial delays loading and unloading ships. They blame the union for withholding the workers who are trained to operate the equipment. The ILWU contends it’s just ensuring the companies don’t cut corners on training and safety.

After nearly nine months of negotiations failed to produce a settlement, the union and the employer coalition, the Pacific Maritime Association, entered federal mediation January 5.

But within a week the PMA had launched its latest offensive in the ongoing tug-of-war—eliminating the night shift at the biggest container ports on the West Coast.

“This is a ‘lockout-lite,’” said Dean McGrath, president of ILWU Local 23 in Tacoma, Washington. “You don’t just shut off the night side to help clean things up without any other change in operations. This is about one thing and one thing only, to scare our guys.”

Industry analysts suggest the elimination of night-shift work is aimed at stirring rank-and-file dissatisfaction and pressuring union leaders to reach a settlement.

According to McGrath, whose local saw cuts to the night shift starting in mid-December, terminal operators have not used the reprieve from loading and unloading ships to clear containers off the docks or out of the yard. The cuts in staffing have only exacerbated congestion on the docks and the backlog of container ships in the harbor.

Many observers point to larger trends in the shipping industry, rather than ILWU job actions, to explain why West Coast ports are bursting at the seams. Container traffic hit record levels this year, in no small part thanks to the larger ships—with up to 40 percent more capacity—in today’s fleets. Rail capacity has also been limited.

And a prime culprit for congestion has been the shortage of container chassis—connected to a move over the past two years to outsource this work.

It’s no surprise the chassis outsourcing has become a central issue in the contentious negotiations. In its last round of negotiations the ILWU agreed to major changes: accepting automation in exchange for exclusive jurisdiction over future work on the docks, including maintenance and repair of container chassis, the trailers used to move containers off the docks.

The demand for jurisdiction fanned the conflict between the ILWU and the Machinists who maintain chassis in certain terminals on the West Coast—much as the ILWU has sparred with the Operating Engineers (IUOE) for exclusive jurisdiction over crane operations.

Shippers use tens of thousands of these chassis to shuttle containers in and out of the terminals. But now that the work is outsourced to a third party, the chassis pools have moved off the docks, adding another step to coordinate in the process of moving a container out of the port.

Worse for the ILWU, because these companies are not part of the PMA, shippers are reportedly throwing up their hands, saying they don’t have the authority to guarantee ILWU jurisdiction over maintenance and repair—effectively unraveling the job security the union won.

This jurisdictional threat comes at a sensitive time for the ILWU, coinciding with the opening of two newly automated terminals in the massive Los Angeles-Long Beach port complex. These terminals deploy the latest technologies, such as remote-controlled, rail-mounted gantry cranes to stack and store containers, and remotely guided carts to ferry containers into the yard.

It’s a glimpse into the future for longshore workers—one that has sparked no small amount of insecurity. Indeed, last fall members of ILWU Local 13 staged a series of job actions at one of the new terminals, TraPac. Eventually the mayor of Los Angeles brokered a settlement with the company to include ILWU members in the control room functions and guarantee data sharing with the union.

ILWU members are right to worry about job security. When APM Terminals introduced similar technology in Norfolk, Virginia, several years ago, about 100 jobs were eliminated compared to conventional operations.

Even if the ILWU is able to settle the container contract on favorable terms, big questions remain for the union rank and file.

As the recently settled grain contract illustrates, the ILWU can’t remain an anchor of the waterfront workforce, or preserve today’s longshore standards, simply by leaning on its rich history and legacy of militancy.

Grain handlers in the Pacific Northwest were locked out for a year and a half, and it was only when the state of Washington refused to continue its police escorts for grain inspectors—and the stalled shipments threatened the fall harvest—that a settlement emerged.

Unfortunately, the new agreement wrested key levers of power from the union’s hands. For example, console operations—the workers who separate, weigh, and control the flow of the grain from the vessel to the terminal—were shifted to a non-union company. The union also ceded some discretion in hiring to employers. And under the new grain contract, managers can legally do bargaining-unit work in the event of a work stoppage.

Employers also reduced the number of workers on a two-spout operation from five to four, fulfilling ominous predictions that the substandard contract reached in 2012 with EGT in Longview, Washington, would be used to drag down master contract standards.

The union there had waged a pitched battle with EGT after the company refused to recognize the union’s jurisdiction and announced it would operate its new state-of-the-art terminal with the more compliant IUOE. After months of picketing and direct action—including occupation of the grain terminal, a blockaded train shipment, and scores of arrests—the ILWU finally reached an agreement with EGT.

But despite the militancy, the union’s contract with EGT fell far short of traditional standards and is now serving to undercut those standards. For example, crews of three handle a two-spout loading operation in Longview.

EGT was able to wedge open the master contract, in part because of its overwhelming resources and the unfavorable legal terrain facing unions everywhere. But it was also in part because the ILWU, particularly at the top, remained uneasy about drawing more deeply on community support or calling in reinforcements from the rest of the labor movement.

So rather than double down on the community support or direct action that made any deal in Longview possible, the grain lockout seemed to push the ILWU towards a more close-to-the-vest strategy with its members and a go-it-alone approach with its allies in and out of the labor movement. The union’s August 2013 exit from the AFL-CIO illustrated this dynamic.

Unfortunately, the current container contract negotiations are only reinforcing these trends, and missing a critical opportunity to school today’s rank and file in the militancy and creativity that are hallmarks of the union’s tradition.

During nine months of negotiations the union did little to draw members into a discussion of how their predecessors built power at this critical chokepoint in the global economy, and what the terminal operators are doing to wrest that power away.

And there was little concrete discussion of how the union can hold onto or expand its power, especially important since the current generation of longshore workers largely inherited the ILWU’s gains. In Local 23, for example, half the dock workers entered the industry after the 10-day lockout of 2002.

It’s an encouraging sign, then, that local leaders in various ports are moving beyond a message of “trust us,” and starting to engage the ranks in more public displays of solidarity and support. It’s a far cry from the kind of internal contract campaign and visible public outreach the ILWU needs, but it’s a welcome antidote to the isolationism that has taken root inside parts of the union.

Hopefully, it will also start to reverse the cynical self-reliance that is corroding solidarity and limiting the ILWU’s support for other workers in the cargo chain, such as the port truckers in the port of Los Angeles-Long Beach who’ve been struggling to unionize. Solidarity is not only in line with the ILWU’s best traditions—it’s also necessary for the union’s long-term survival.

If ILWU members don’t figure out how to use their ship-side strength to bolster unionization across the logistics industry, they will see their power erode, as shippers and terminal operators continue to shift work off the docks and away from the waterfront.

The ILWU’s members, with their rich history, deserve as much from their union. They still have time to avoid the fate of once-strong unions like the UAW.

Automakers worked for years to shrink the Big 3’s core workforce through outsourcing and automation, drive down standards across the rest of the industry, and create a “union-free” supply chain. The UAW accepted the Faustian bargain of partnership, and arithmetic did the rest. Now a union that once boasted 1.5 million members and set standards for workers everywhere has been reduced to 390,000 members—and a growing share of those are working for half the UAW’s traditional wage scale.

Here’s hoping the longshore ranks are ready to put their union’s slogan, “an injury to one is an injury to all,” into action once again.

A version of this article appeared in Labor Notes #431, February 2015. Don't miss an issue, subscribe today.
Mark Brenner is the former director of Labor Notes and is currently an instructor at the University of Oregon's Labor Education & Research Center.
Related
Before Your Strike Vote, Consider a Practice Strike Vote »
Joe Biden Thinks a Rail Strike has Been Averted. Do Rail Workers? »
The Right to Strike Is at Stake on the Railroads »
Rail Workers Reject Contract Recommendations, Say They're Ready to Strike »
How Intermodal Yard Workers Doubled Their Pay »