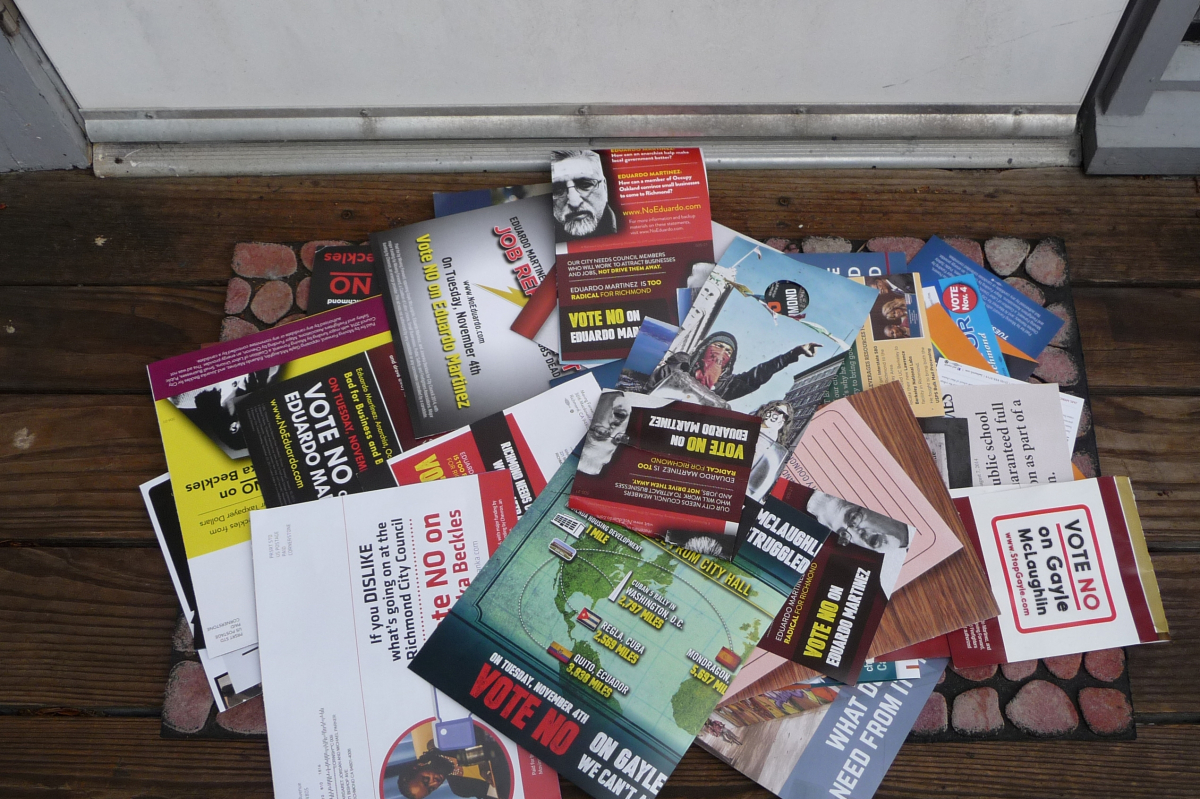 A mountain of election mailers listed “major funding by Chevron.” Voters received as many as four a day. Chevron also bombarded Richmond voters with billboards and TV ads. Photo: RPA.

It’s not often that a city council race in a city of 100,000 draws national attention. It happened in Richmond, California, this fall because one big corporation was so shameless in its open attempt to buy the election.

But even more remarkable was the fact that the corporation got beat. Up against the Democratic Party establishment, plus $3 million in campaign spending by Chevron—the third-largest company in the world—a grassroots group won.

Richmond, north of Berkeley in the East Bay, grew up during the shipyard boom and war production of World War II, when workers from other parts of the country flooded in. More recently, it’s been known for its problems: population loss, high crime, bankruptcy, the hollowing out of downtown, dirty air, poverty. The city is now 40 percent Latino, 26 percent Black, 17 percent white, and 14 percent Asian. A fifth of the population was born outside the U.S.

Richmond was long dominated by Chevron, whose massive refinery sits on the shoreline belching oil byproducts into the atmosphere. Chevron is the town’s biggest taxpayer and largest employer—but only 7 percent of employees live in Richmond. The execs certainly do not.

In 2012, a fire at the refinery narrowly missed killing workers and spread toxic material over a wide area of the city. Afterward, the company put on a PR campaign called “Richmond Proud” to win support for a modernization and expansion project.

But Chevron was annoyed that it had to contend with a coalition of local organizations that said modernization should result in cleaner air and fewer greenhouse gases. Two members of the Richmond Progressive Alliance (RPA), Jovanka Beckles and Green Party member Mayor Gayle McLaughlin, were on the city council that had to approve permits for the project.

The Richmond Environmental Justice Coalition proposed a host of community benefits that Chevron could offer, like helping keep open a local hospital that was on the verge of shutdown. If Chevron’s negligence set off another fire, they asked, would people have to wait half an hour for an ambulance?

In addition, the city was suing for damages caused by the fire, including plummeting property values. Chevron wanted pliable people in office, people who would give the company a cheap settlement.

So this fall, Chevron set out to install its own candidates—two of them lived elsewhere but moved to the city in order to run—and to smear Beckles, McLaughlin, and their running mate, retired elementary school teacher Eduardo Martinez.

For weeks Richmond residents were bombarded with billboards, TV ads, and mailers either distorting the facts about the three “Team Richmond” candidates or simply inventing lies. One mailer showed a picture of Martinez with a bandage on his face and implied he’d been injured fighting the police during Occupy Oakland. The photo was a Halloween picture lifted from Martinez’s Facebook page.

It was not unusual for voters to receive four mailers a day, all labeled “major funding by Chevron.” In “independent expenditures” alone, Chevron spent more than $150 per person who actually voted. The RPA candidates spent around $220,000 altogether, including public matching funds, a ratio of 1 to 15 against Chevron’s dollars.

Chevron’s campaigning was so intense it prompted the Los Angeles Times to write, “For a corporation to manipulate a municipal election on this scale should be illegal.” Rachel Maddow on MSNBC devoted three shows to Chevron’s audacity.

But the three RPA candidates won decisively, as did the candidates they supported for mayor and for a fourth open seat. The results showed a clear slate vote.

HOW’D THEY DO IT?

How did the Davids of RPA beat the Chevron Goliath?

Chevron’s overreach allowed RPA to make corporate domination the issue. The company’s candidate, Nat Bates, said openly that his first act as mayor would be to go to Chevron and ask what it wanted. It was easy for RPA to argue, “Do you want independent candidates who can’t be bought?”

In the months before the election, RPA questioned Chevron’s civic concern again and again as its modernization project was debated. A poll showed voters were less likely to vote for candidates they knew Chevron supported.

Chevron’s dirty campaign energized RPA members but also had the unfortunate effect of turning off other voters, who saw the nastiness and turned away. Turnout was low.

RPA had a record of accomplishments in office and in the community: the lawsuit against Chevron; a $13 minimum wage; municipal ID cards to aid the undocumented; an end to driver’s license checkpoints; community policing and a lower crime rate; attracting a huge lab to Richmond with the potential for good new jobs; lower utility bills through an arrangement with a green energy company; cleaner air.

RPA members and officeholders had stopped a bid to build a casino, fought to keep a hospital open, and floated the idea of the city’s taking over underwater mortgages through eminent domain, to avoid foreclosures. The hospital fight earned them support from local members of the California Nurses Association and the union itself.

RPA had a record of letting other groups use its downtown office space. It worked closely with an array of environmental groups, such as the Sunflower Alliance, Sierra Club, Asian Pacific Environmental Network, and Communities for a Better Environment, as well as a faith-based community organizing group.

The Sierra Club phonebanked its members for the RPA candidates. The Sunflower Alliance made its own banners and held them at busy intersections.

RPA campaigned in a way that built its base. The current election wisdom is that door-knocking canvassers should spend 30 seconds at each door, to identify whether a voter is already a supporter. Then when Election Day comes, the organization returns to those voters and transports them to the polls. “Knock and drag” is how one union staffer described it.

But RPA, an all-volunteer organization, had no money or infrastructure for such a massive Election Day operation (though 200 people did come out to volunteer that day). It chose instead to start with house parties, which gave time for real discussions and solidified support.

Then the group spent its time at the doors, in the weeks leading up to the election, actually trying to convince new people to vote for the RPA team. The canvassers weren’t likely to get into deep political discussions, of course, but they did try to outline the major issues and answer questions.

After the election, RPA estimated that close to 400 people contributed more than 20,000 hours to roughly 100 events and projects, not including the thousands of hours talking with people in person, writing letters, bringing food to events, calling friends, and making signs.

Unions’ role in the campaign was not huge but was important. Early endorsements from public workers and health care unions boosted credibility. Service Employees Local 1021, which represents city workers, not only endorsed but also campaigned independently for the RPA candidates.

The police and fire unions and the construction trades backed the Chevron candidates. The Teachers, and the Steelworkers at Chevron, stayed quiet.

Since the election, though, the building trades have shown interest in working with RPA—fearful that the pending lab project will be contracted non-union.

And what of the Democratic Party, which got its head handed to it? Its leaders were not interested in supporting the kind of anti-corporate work that RPA does, nor in its consistent refusal to run candidates who took corporate funding.

At a meeting held to decide Democratic party endorsements, the members present voted to support the incumbent Beckles and another incumbent backed neither by RPA nor (openly) by Chevron. But party leaders chose instead to endorse two Chevron-backed candidates.

Five seats on the Richmond city council are now held by RPA members or those they backed. A sixth is held by Chevron’s defeated candidate for mayor. The seventh seat will be appointed by the new council.

RPA showed that it’s possible to take on a big corporation and win—by being clear that you are taking on that big corporation. RPA didn’t straddle the fence or make nice. It promised to stand up for the needs of the community over Chevron’s profits.

Like David, RPA had a weapon that worked, and didn’t shy from using it.

A version of this article appeared in Labor Notes #430, January 2015. Don't miss an issue, subscribe today.
Jane Slaughter is a former editor of Labor Notes and co-author of Secrets of a Successful Organizer.
Related
Auto Workers Win Direct Democracy in Referendum »
New York City Workers with Disabilities Fight for Inclusion in Pandemic Recovery, Mayoral Race »
We Need Democracy on the Job and in the Union, Too »
2020 in Review: Workers Struggle Under the Weight of the Pandemic »
Why Did California's Tax the Rich Measure Lose? »