Teamsters Secure their Right to Vote, In Time for 2016 Election 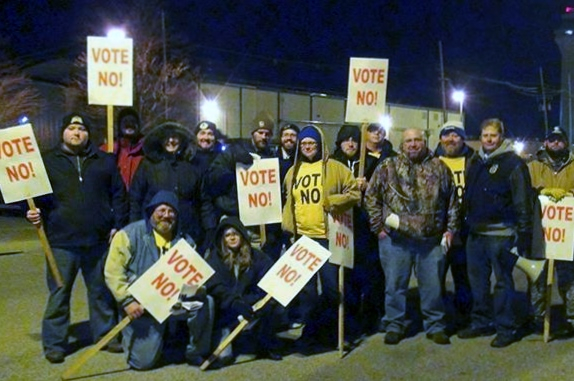 The right to vote for top officers will now be permanently enshrined in the Teamster constitution. And after a wave of anger at concessions forced on unwilling members, most notably at UPS, some of Hoffa’s big opponents are teaming up to challenge him. Photo: Teamsters Local 89.

Last summer Teamsters for a Democratic Union raised the alarm that President James Hoffa was coming after rank and filers’ right to vote for the union’s top officers. Now TDU is celebrating a win: the right to vote will be permanently enshrined in the Teamster constitution.

That’s the central provision of a settlement agreement the U.S. government and the Teamsters announced January 14—replacing the 1989 consent decree as a way to monitor for corruption and enforce member control of the union.

The news comes as Teamsters gear up for a hot union election in 2016.

“I am cautiously optimistic,” says Frank Halstead, a Los Angeles grocery warehouse worker and TDU member. “We’re starting early, putting together a coalition slate, trying to get people to focus on what we agree on… And one thing we all agree on is that Hoffa has to go.”

Thousands of members had signed TDU’s petition urging the court to protect the right to vote. Judge Loretta Preska will hold a hearing February 11; she is expected to approve the permanent settlement hammered out between the U.S. Attorney and the union.

The right to vote for Teamster national officers was TDU’s idea in the first place—a democratic alternative to government control of the union’s operations.

In the ’80s the Teamsters had ties to organized crime, and the government investigated the union for racketeering. To avoid a trial and possible federal trusteeship, the brass reluctantly accepted the consent decree: a deal that included direct elections for the union’s top seats, fair election rules including an independent supervisor, and an Independent Review Board to investigate charges of corruption, from locals on up.

Up till then, Teamsters officers had been elected by delegates at a tightly stage-managed convention—generally with near-unanimous votes. That’s still the way it works in most of the largest U.S. unions.

But in the Teamsters’ first-ever direct election in 1991, members voted in an opposition slate headed by Ron Carey—and the change breathed new life into the union. His administration worked to activate the rank and file, and reversed declining numbers with new organizing.

Undoubtedly the highlight of the Carey years was 1997’s 15-day, nationwide strike at UPS, under the banner “Part-Time America Just Won’t Work.” The strike captured national attention and scored one of labor’s biggest victories in decades, forcing UPS to combine 20,000 part-time jobs into 10,000 full-time jobs.

Carey was removed from office in 1998 over campaign finance allegations, though he was later acquitted of all criminal charges. His successor Hoffa has been president every since—presiding over the loss of much of what members had won.

Part-time jobs, for instance, have proliferated again at UPS. In freight, the union has failed to organize and has let its once formidable power erode, recently accepting serious pension concessions.

In grocery, “these multinational, billion-dollar corporations are just grinding workers to the ground because of unreasonable productions standards, and the international provides no assistance,” says Halstead.

“People are realistic,” he says. “They’re not looking for someone to ride in on their white horse and save the day.

“But our members are our most valuable asset, and they don’t get utilized in strategy or planning. Our current leadership spends its time placating the company, and shuts our members out of the process completely.”

TDU has run vigorous challenges every five years, but so far hasn’t been able to topple Hoffa. TDU-backed Tom Leedham won at least 35 percent of the vote three elections in a row (1998, 2001, 2006).

But now after a wave of anger at concessions the union forced on unwilling members in its national contracts—most notably at UPS—some of the administration’s big opponents are teaming up.

Members have used this right to stop concessions in their local agreements—and to win gains. For instance, when the 7,000 UPSers in Local 804 in New York City held up their national contract by voting no in 2008, they stopped the company from eliminating their 25-and-out local pension.

At the end of the latest bargaining in 2013, though members narrowly voted to approve the national deal the union had reached with UPS, they rejected 18 of the 28 local supplements, covering 63 percent of members. UPSers were angry at the deal’s givebacks, especially an increase in employees’ out-of-pocket health care costs, and its failure to address the proliferation of part-time work, coerced overtime, technological surveillance, and supervisory harassment.

The union’s argument, TDU National Organizer Ken Paff said, was that the insurance is still pretty good, compared to what the nonunion majority gets. “But what was interesting was that argument got no traction,” he said. “People said, ‘we work at UPS, we work like dogs, they’re making profits hand over fist—we want no concessions.’” UPS made $4.4 billion in profit in 2014.

The union went back to the table and improved the health care a bit, but focused greater energy on pushing members to approve the deal. When Teamsters continued to hold out in Philadelphia, western Pennsylvania, and Louisville, Kentucky, the union’s national officers simply declared they had the right to impose the contract—and did so.

In the 2016 race, it looks like Hoffa will face off against a TDU-backed coalition slate that unites local leaders including Fred Zuckerman, who ran for vice president on Gegare’s slate last time, with Pope and Local 804 President Tim Sylvester. (The coalition hasn’t yet announced any candidates.)

Last weekend 125 Teamsters turned out to a Los Angeles meeting to hear Zuckerman and Sylvester speak.

Zuckerman is president of Local 89 in Kentucky, the biggest UPS local and a center of resistance to the contract. Despite pressure from the international and the company, members voted their local rider down twice, by overwhelming margins.

Sylvester’s local also drew national attention for its militancy last year when 250 package car drivers in Queens walked out to protest an unjust firing—and were all fired. Local 804 ran a public campaign that got the firings reversed.

Challengers will get a boost from at least one improvement to the election rules. Starting with 2016, the settlement agreement provides, each candidate will get a free mailing to members a week before the election.

Though mail’s no substitute for an army of grassroots volunteers, you also can’t expect to reach a million members personally. So the mailing could be a big deal. In past elections the cost has deterred TDU-backed candidates from mailing at all—while Hoffa has sent out multiple glossies.

On the flip side, TDU didn’t get everything it wanted in the agreement. One worrisome change affects the threshold for getting onto the national ballot.

At present candidates for national office must gather 50,000 member signatures to become accredited, then win at least 5 percent of convention delegates to be nominated. To avoid competition, the current administration has been keen to raise the figure to 10 percent of delegates.

That’s a tougher threshold than it might sound. “Incumbents have a tremendous advantage in the delegate elections,” Paff says.

Local officers beholden to the international union leadership often run unopposed in delegate elections. When they do face opposition, they have financial and strategic advantages over rank and filers. And at the convention itself, delegates are pressured to back incumbent leaders.

The agreement delays the pain. It provides that the 5 percent threshold will be maintained through the 2016 and 2021 elections. But after that, delegates may vote to raise the bar.

The union will also gain power to appoint the people charged with monitoring it for fairness. The three-person Independent Review Board—presently one member is appointed by the union, one by the government, and one jointly—will be replaced by one investigating and one reviewing officer, eventually both to be appointed by the union’s executive board. The union will also get to appoint its own election supervisor—presently jointly nominated and court-approved—beginning with the 2021 election.

These impending changes ramp up the urgency for the challengers.

“It just makes it all the more important that we win this time around,” Halstead says, “because if we don’t take advantage of this opportunity, Hoffa’s going to do everything he can to make sure we never have this chance again.”

Alexandra Bradbury is the editor of Labor Notes.al@labornotes.org
Related
Teamsters United Takes the Wheel »
Work Saturdays, Huh? How UPS Drivers Resisted by Complying »
Teamster Insurgents Plan for a Win—And What Comes After »
Viewpoint: We Must Prepare to Strike UPS in 2023 »
At a Convention Like No Other, Teamster Challengers Turn a Corner »