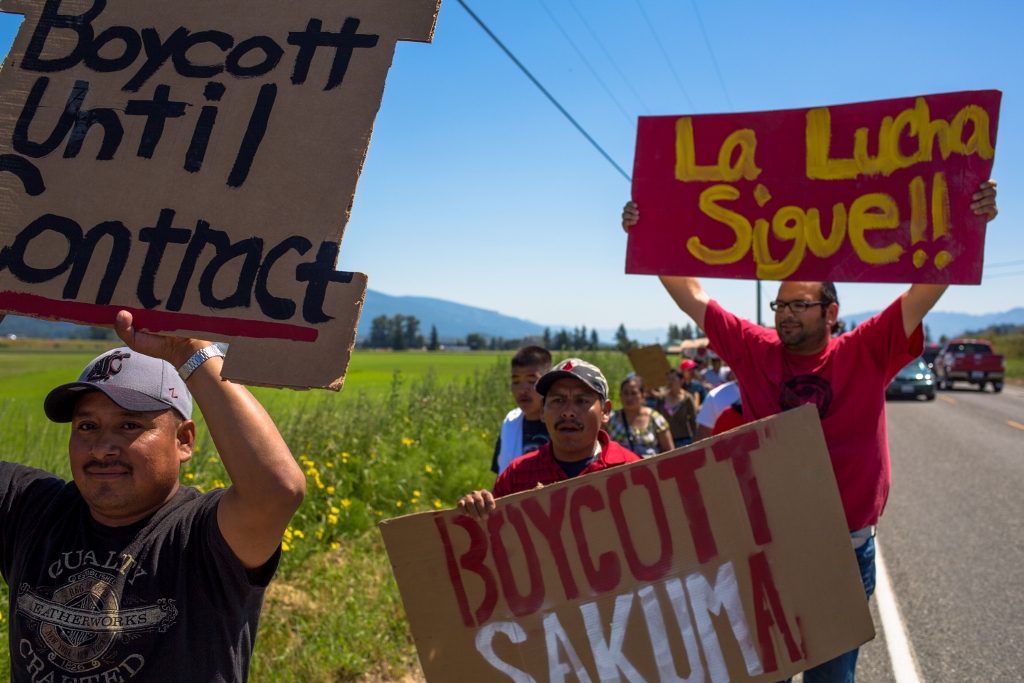 Berry pickers with the independent union Familias Unidas por la Justicia are calling for a boycott of Sakuma blackberries, blueberries and strawberries until they get a union contract. The berries are also sold in Driscoll's packaging. Photo: James Leder.

Felimon Pineda was born in a small Mixteco community in rural Oaxaca, Mexico.

His family moved in 2007 to Washington state’s Skagit Valley, where he and his wife picked berries for Sakuma Brothers Farms. Last year his peers elected him vice president of Familias Unidas por la Justicia (United Families for Justice), an independent union of 200 migrant farmworker families.

Most of the union’s members are indigenous Mixteco- and Triqui-speaking immigrants from the southern Mexican states of Guerrero and Oaxaca, where most share common hometowns. Two-thirds spend their winters in California; one-third have settled in Skagit and Whatcom counties. Some have migrated to pick berries at Sakuma for over a decade.

This year Pineda and his wife were not rehired by the company, and they sued. By the time the judge ruled in the farmworkers’ favor, Pineda had secured work at another farm. Still, he has become a spokesperson for his union.

Pineda was interviewed and translated by Tomás Alberto Madrigal. This interview has been edited for length and clarity.

Madrigal: What is your role in Familias Unidas por la Justicia?

Pineda: Last year we worked on a farm called Sakuma Brothers. There was a lot of injustice. We began to work picking strawberries on our knees in the rain.

The supervisors would yell at us. They didn’t give us a lunch break, we didn’t get rest breaks. We were obligated to work between 10 and 12 hours a day.

A lot of our people complained because when we worked in the rain, we would get soaked and tire faster. Some people wanted to leave work early, but they wouldn’t let them.

The strawberry season ended. Then we started to pick blueberries. The first day, one of Sakuma’s supervisors told us we had to pick in a particular field, even though we knew there wasn’t much fruit that was good for picking.

One of our co-workers, Federico Lopez, started to say that 30 cents a pound was too low, that in other places they were paying 50 to 70 cents.

The supervisor responded, “We cannot pay more, because the company ends up losing if we raise the piece rate. Those who want to work, there’s work for you, and those who won’t, well, you are out of luck.”

The next day the supervisor said the same thing. But by then all 200 pickers knew they were not going to earn enough. We had worked for 10 hours and almost all did not even earn the equivalent of the minimum hourly wage.

Everyone said, if the piece rate wasn’t raised, nobody would work. We all went home.

Later that day, around 10 in the morning, Federico Lopez began knocking on people’s doors to ask if the families who lived in Sakuma’s labor camp would stand up for him. The company had evicted his family from their cabin.

They accused him of being a violent person who intimidated people so they wouldn’t go to work. He had come all the way from California, and they wanted to terminate him.

The people decided to support him. All the families gathered and elected 10 people to take their message to the company. The representatives said that if Federico was fired, they had to fire all of us, and they had to pay us back for all the costs we had incurred to travel from California.

The company had to think about that for a while. They told us they would respond the following day. When that day came, the company decided not to fire them. That’s when we started to organize our people.

What is your union fighting for?

We want this company to sign a union contract. This is the only way we can legally bring up our demands and be stronger in our ability to defend ourselves.

We don’t want to be fired in this way. We are all human beings, and we don’t deserve to be at the feet of the wealthy. We are earning our money through our own sweat. We are not stealing from them. They pay for what we produce.

We do not deserve to be punished by being denied rest breaks and lunch breaks, or to have to work in the rain.

Did you all know about unions before forming your own? Why did you choose to form an independent union instead of joining an established union?

To be honest, we didn’t really know much about unions. But when our struggle started, we sought help from different places.

We asked for help from a union that has represented farmworkers. We found out the union couldn’t help us. They gave many excuses. They said they didn’t have the money, they were involved in another struggle, they just couldn’t. In the end there wasn’t any other path [than to form an independent union].

This union has held eight strikes to date, one this season and seven last year. Why did you strike? How many people participated?

We [negotiated to] have three representatives of our union join two company supervisors to determine a test pick. Those five people would pick for one hour, and we could calculate what piece-rate the people were likely to earn.

Last year, since the company hired guestworkers from Mexico, they were required [by the guestworker program] to pay $12 per hour. So we also negotiated to secure [the equivalent] wage for us. The people could pick blueberries knowing that they would at least earn $12 per hour if they didn’t make the equivalent by piece-rate.

There were other strikes after this?

Yes, there were several. One, a big strike, I remember it well—by that time the people knew how to defend themselves.

The blackberry boxes were being paid at $4.25, and it was too low for the people. They organized as a crew and asked for a raise. They said if there was no raise then they would not work. They united and communicated with the other crews.

Later that day, when the people were gathered, the president of the union [Ramon Torres] arrived. Back then we weren’t yet fully unionized, but since he was president of the committee, the workers asked him to demand a raise for them.

Since the people were ready to stop work, the president was able to secure an increase in the wage per box. The very next day he was fired.

I was working in another, smaller crew, picking blackberries. I received a phone call from him telling me I needed to be there. We had come to an agreement that none of the committee could face the company by ourselves.

I said, “I can’t, because I’m working,” and he said, “well, I was also working, but they are calling me to the office now and I want you to join me.” I said okay and went.

He was already in one of their offices. He was surrounded [by] company executives, the president, and six or more security guards. A security guard came up to me and told me that I couldn’t enter.

After five minutes Ramon exited, saying that he was fired. He was wrongly accused. Since all the people knew that the day before he had negotiated a pay raise, we [just] had to talk to the people. Everyone was ready, and they stopped.

We started a general strike. It was our largest strike. We lasted about 10 days. Some people lasted even longer, 15 to 20 days on strike.

What exactly did Sakuma’s consultants do?

When we went out on strike, their supervisor came out to us. He told us that if we wanted to make things better, it would be good for us to talk to the consultants, because they were there to resolve everything.

But that was a lie, because the company hired them. We all knew this and kept telling them no. We said, “We don’t want to speak to anyone else but the company executives.”

The people got fed up and started to chant that they did not want the consultants there, that they should leave the fields.

People started to shout, “Out! Out! We don’t want you here! If you really want to help, go over there to the berry field, go and pick!” Everybody yelled that they didn’t want the consultant, so he said it was better for him to leave.

The truth is that the security guards had us under surveillance. Last year I lived in Labor Camp 2. Since there are more people that live there, that’s where the residents of Labor Camps 3 and 1 came to participate in meetings.

When we were driving down the road, some of them would tail us. They would follow us. This also happened at work. The security guards would patrol us and monitor us as we worked. They would park their car next to the field and be there the entire day.

A lot of people were afraid. Why are they following us? We have never seen these people before. Since all the people who lived at the camp were families with three to seven children, they were afraid for their families. Some people thought they were police or immigration.

After a while there was an incident where one of the security guards entered the women’s bathroom. One woman saw him at 1 a.m. She was going to the bathroom alone. Upon exiting her stall she was frightened that the man was inside the bathroom with her. That was the basis of the lawsuit where we were able to gain an injunction against the security guards.

How is the boycott campaign going?

We are boycotting all of Sakuma’s fruit. Strawberries, blackberries, and blueberries. We have been successful, because many grocers have taken Sakuma’s fruit off the shelves.

The problem is that the Sakuma corporation is hiding behind the Driscoll’s label. That is why we are also boycotting Driscoll’s. We can’t do it any other way, because the majority of the berries are being picked into Driscoll’s packaging.

Why should the public be invested in your struggle?

Why? Well, that’s really important. If we did not pick the fruit, how is that fruit going to get to the dinner table of the general public?

The company is saying that they are good people. They steal our wages—and then turn around and donate money to the churches, the hospitals, the school district. They are donating money so that the community has their back, but it’s money they have stolen from us.

That is why we ask that you not purchase Sakuma berries. That’s the easiest way we will be able to win a union contract.

What is your union asking of other unions and fellow workers?

We ask if you can help us with the boycott. We are a new union and it’s been difficult to continue, because we don’t have many funds. We have asked unions for donations, and many have answered the call. I am very grateful to those unions.

Tomás Alberto Madrigal is a Ph.D. candidate at UC-Santa Barbara’s department of Chicana and Chicano Studies, part of the leadership of Community to Community Development in Bellingham, Washington, and a volunteer with Familias Unidas por la Justicia.

A version of this article appeared in Labor Notes #429, December 2014. Don't miss an issue, subscribe today.
Related
Viewpoints: How Academic Workers’ Leverage Can Grow in a Long-Haul Strike »
Every Union Contract Right Now Should Be the Best Ever »
Could We See a Rail Strike? »
Undaunted by Fines, Massachusetts Teachers Defy Strike Ban »
Ahead of Halloween, Sysco Teamsters Give Corporate Ghouls the Heebie-Jeebies »