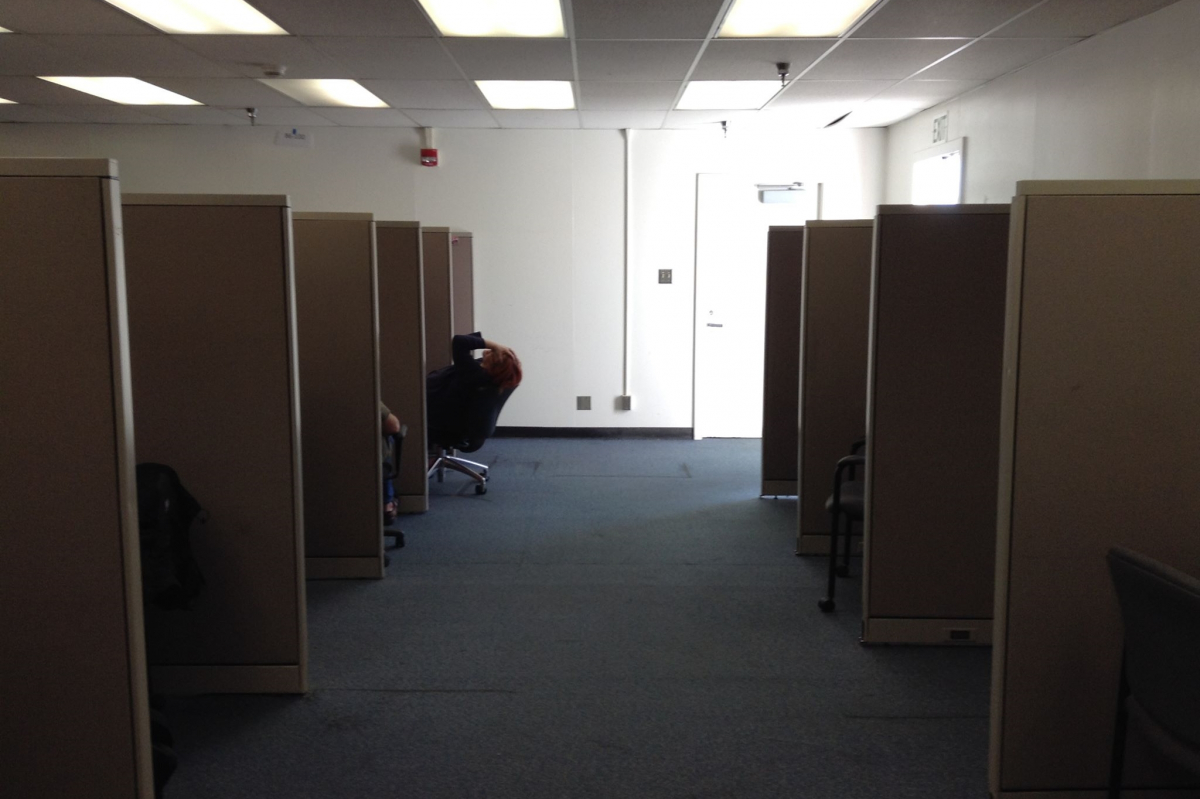 A teacher jail in Los Angeles, where many waited for years. The union has made some progress: Teachers can now stay in occupational limbo at home. Photo: UTLA.

Imagine being removed from your workplace for misconduct—without being told what you did wrong. Imagine waiting years to find out whether you can return.

Hundreds of Los Angeles teachers have been put on leave and in limbo. It’s been called “teacher jail,” and it’s not far off from the “rubber rooms” New York City tabloids have made famous. In both places, the tactic is used to scapegoat teachers and unions.

L.A. teachers and their new union leaders are publicly campaigning to end teacher jail. They hope to resolve the cases, so teachers cleared of wrongdoing can return to the classroom, and they’re demanding to negotiate stronger due process.

Two years ago Mike Fuoroli was removed from his classroom and told he wasn’t allowed back.

It took a year to find out what he was accused of: sexual misconduct. He claims he never even worked or interacted with the student who made the allegation. Though the police investigated, he was never questioned, and no charges were brought against him.

Fuoroli is still on paid leave. He fears he may never return to his job.

No one from the teachers union, United Teachers Los Angeles (UTLA), disputes that allegations from students should be taken seriously, nor that actual misconduct should be cause for dismissal.

But they do say teachers deserve due process. And they claim the district is skirting its own procedures, plus the union contract, by removing teachers from work on “immorality” or “misconduct” issues rather than things the union can grieve, such as insubordination.

Arlene Schery was removed in even murkier circumstances. She alleges she was sent to teacher jail for threatening to file a grievance against her principal, after complaining that her classroom was overcrowded and lacked air conditioning.

She later found out the official accusations against her, including that she hadn’t followed procedure for handling students’ cell phones. They allege she took one and kept it overnight.

There were a few other allegations too, but none merited “housing” a teacher—which is only supposed to happen in cases of alleged sexual misconduct, workplace violence, or criminal acts.

In the offices where housed teachers are instructed to report, Schery and Fuoroli met others who also dispute the charges against them.

Schery said it’s not only active allegations that get a teacher housed. “What they will do is take all the information they have from anything prior and make it fit into the complaint,” she said.

She and Fuoroli accuse the district of age discrimination, since their research found an overwhelming majority of housed teachers are over 40.

Although the teachers are on paid leave, the process is demoralizing. The waiting, the uncertainty, the damage to one’s reputation—it all takes a toll.

“It’s really quite painful,” said Colleen Schwab, UTLA secondary vice president, who’s working with the housed teachers. “They are scared, they don’t know why they’re there. Ninety-nine percent of them want to get back to their classrooms.”

Why would a school district that claims to be out of money let hundreds of teachers collect paychecks outside the classroom for years? It seems incredibly inefficient.

But Fuoroli and Schery suspect the district hopes to save money when these older teachers, who tend to be higher on the pay scale and accruing pensions, just give up and quit.

Unfortunately, when it comes to teachers’ due process, the climate in L.A. is toxic.

When news broke in 2012 of chronic and disturbing sexual misconduct by a teacher at Miramonte High, the district’s response was to go nuclear.

Every employee in the school was removed, even if they knew nothing of the guilty teacher’s crimes. It later came out that district administrators had long known of complaints and red flags about this teacher—now in prison—but done nothing.

While “teacher jail” has existed in L.A. for years, its use increased after the Miramonte scandal. Teachers allege Superintendent John Deasy began combing through teachers’ files, looking for examples of misconduct—a way to patch up the district’s image by appearing to clean house.

Housing teachers was a signature policy for Deasy, who resigned this fall. When teachers requested information, his response was that we can’t say because we need to protect students. He insisted the district would take as long as necessary to conduct its investigations.

“Obviously UTLA doesn’t want anyone who shouldn’t be around children in classrooms,” says Schwab. But the solution, she says, is to move cases forward in a timely manner: “a fair and immediate review of teachers,” so both sides can “accurately go over the evidence.”

Meanwhile the very idea of teacher job security is under national attack. After a California judge ruled this year in Vergara v. California that the state’s teacher dismissal law allowed bad teachers to harm students’ education, national anti-union groups are filing lawsuits to overturn teachers’ due process protections elsewhere, including in New York.

Due process for K-12 teachers, sometimes referred to as tenure, is often laid out by state law and school district policies, then enforced by unions. After teachers make it through a probationary period that varies by region, often two to three years, they generally cannot be dismissed without evidence of misconduct or poor performance.

Former broadcaster Campbell Brown has launched a media campaign against teacher tenure. Her main talking point: the New York City teachers union protects sex offenders. She even alleges that arbitrators who hear cases are in on it.

Other cities too have pools of teachers still working for the district, but not assigned to classrooms. They’re in a gray area—their union contract protects them enough so they can’t be fired or laid off completely, but not enough to get their cases resolved.

New York has hundreds. Some were removed from the classroom for allegations of misconduct. Many others simply weren’t hired after their schools closed. They remain on paid leave, reporting to substitute positions or to an office where they wait to be reassigned.

In L.A., Fuoroli and Schery began to work with fellow housed teachers, trying to get their cases cleared so they could teach again. They organized rallies and meetings, but until this year, got little institutional support from UTLA.

Many of the dismissed teachers, eager for new leaders to take a more aggressive stance, supported the Union Power slate, elected in April. Now Fuoroli is vice chair of a Housed Teacher Committee.

The union is demanding to bargain over the teacher removals. Treasurer Arlene Inouye said the new leaders want to resolve individual cases, but also change the district’s practices.

“The plan is very strategic,” she said, “to get the school board to follow their own policy. They are violating their own timeline and their own due process.”

On paper, district policy lays out 120 calendar days to complete an investigation if law enforcement is involved, and 30 days if it isn’t. District officials decide what action to take, then present dismissals to the school board. Inouye said the board is “just rubberstamping” these.

UTLA leaders want to strengthen the contract language to give teachers the right to have evidence presented against them within 20-30 days. If a teacher disputes the charges, they want to be able to take cases to arbitration.

And teachers are appealing to school board members on a case-by-case basis. The goal is not only to clear wrongly accused individuals, but also to persuade the board to be more cautious overall in its reviews of teachers the district wants dismissed.

The new UTLA leaders are talking to as many “jailed teachers” as possible, finding out their stories and coming up with strategies to defend those who are unfairly targeted.

Iris Stevenson, choir director from Crenshaw High, was removed from her position and spent eight months in limbo. The district kept its reasons secret, saying only that it was “protecting the kids.” Ultimately management alleged that Stevenson had taken kids on an unauthorized trip, a charge she disputed.

Stevenson is a legendary teacher and choir leader—the one who inspired the film “Sister Act 2,” in fact. She has traveled the globe with her choir students. They even performed at the White House.

Then there was Greg Schiller, a high school science teacher suspended for helping students make projectile-launching devices for a science fair. (One apparently launched marshmallows.) After five days’ suspension he too was told to report to “teacher jail.” It turned out the allegation was that he was encouraging students to make weapons.

Thanks to UTLA activism, since July, housed teachers are no longer forced to report to offices to wait out their days. They can be at home.

But that small victory added organizing challenges too. Without a worksite, it’s harder to contact teachers or work with them on their cases.

Schery and Fuoroli have already received notices of dismissal, and are waiting for the board to decide their fates. Unless the board reverses the district’s recommendations, they will go on unpaid status and have their benefits canceled.

Teachers and UTLA officers managed to discredit former Superintendent Deasy over two major failures: the district’s billion-dollar iPad deal with Apple, which has since been canceled, and its disastrous rollout of an online scheduling system that left hundreds of kids without classes when school started.

The strong association between the ex-superintendent and the practice of housing teachers may give the union leverage with his replacement, Ramon Cortines. “It’s a breath of fresh air,” Schwab said. “The negativity has been removed.”

A version of this article appeared in Labor Notes #429, December 2014. Don't miss an issue, subscribe today.

Samantha Winslow is co-director of Labor Notes.samantha@labornotes.org
Related
How Educators in Brookline, Massachusetts, Won an Illegal Strike »
Minneapolis Strikers Demand a Living Wage for the Lowest-Paid Educators »
This Year, Let's Coordinate Our Contract Fights to Bargain for the Common Good »
Richmond Educators Are First In Virginia to Win Bargaining Rights »
Twin Cities Teachers and School Employees Gear Up for Strike »