It’s the People’s Mail that Will Be Slowed, Workers Say 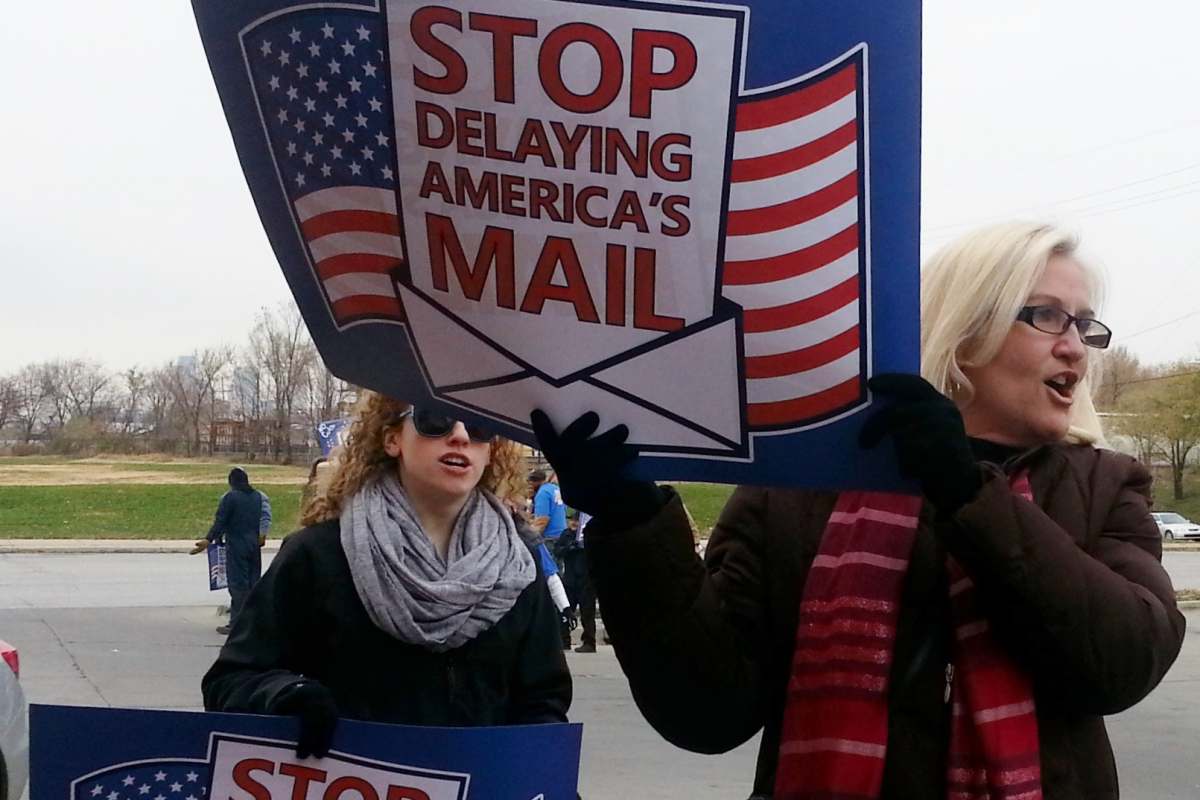 Postal management is whittling down to the bone the infrastructure that serves first-class mail—catering instead to big corporate customers. Phase two hits January 5. Protesters braved sub-zero temperatures in Kansas City to call for a moratorium on cuts. Photo: Diane Krauthamer.

The clock is ticking on phase two of the postmaster general’s draconian cuts plan. Unless Congress passes the moratorium postal unions are seeking, we’re looking at slower delivery standards January 5—and 82 mail plant closures next year.

That would mean worse service for the public, and thousands of job losses. “It’s just a bad deal for everybody,” said Darcy Wood, chief steward and legislative director of Postal Workers (APWU) Local 67 in Kansas City.

Postal workers from all four unions joined a national day of action Friday, timed to coincide with a Washington, D.C., meeting of the postal board of governors.

In Kansas City, a hundred workers and supporters braved sub-freezing temperatures to rally in front of the city’s mail processing hub and a local post office. This plant isn’t slated to close—but it will be deluged with mail if the plants close in Springfield and Cape Girardeau, Missouri.

A majority of senators and one-third of representatives have signed the call for a one-year moratorium on the service standards changes and plant closures. The unions hope they can pass the moratorium in the lame-duck session, in time to block the January 5 cut.

Ratcheting standards down again means there will no longer be an effort to deliver first-class mail overnight—even when it’s mailed in the same town it’s going to. Already in the first phase of its “network rationalization” plan, the Postal Service has slowed its delivery standards once, slashed hours at many post offices, and reduced the number of sorting plants from 600 to 320.

The plant closures and service standards changes go hand in hand. That’s because, with fewer sorting plants, mail must be trucked hundreds of miles out of the way.

For instance, the Springfield plant is slated to close in July. So a crosstown letter, whether you drop it in a blue mailbox or carry it to a post office, will have to travel 170 miles to the Kansas City plant for sorting, then 170 miles back.

What’s not affected: advertising and most shipping by big corporations, who already presort their mail—or send it to a low-wage presort company—to take advantage of bulk mail discounts.

Those discounts are a steal for the commercial mailers, letting them skip out on paying their share of the cost of the mail sorting infrastructure the public relies on.

In a telephone press conference Friday, the Postal Service presented 2014 financials that show it’s ending the year with an operating profit of $1.4 billion. Not bad!

The figures also show an on-paper loss of $5.5 billion, but this is an accounting fiction produced by the Congressionally-mandated obligation that the Postal Service, unlike any other agency, prefund its retiree medical plan 75 years in advance.

Everyone seems to agree this burden should be repealed, but so far, the competing versions of postal reform legislation have been stalled. That’s because postal management and the unions have very different visions of how the postal future should look.

He claims the Postal Service is suffering from the declining volume of first-class mail, the most profitable type. The year’s decline can’t have been too dramatic, since first class revenue actually went up—but management says that’s only because prices rose, and the Postal Regulatory Commission may force it to roll back the rate increase.

So Donahoe’s vision is to whittle down to the bone the jobs and infrastructure that serve first class mail, and instead cater more to corporate customers—Amazon, UPS, FedEx, and the big advertising mailers—who don’t need the sorting plants anyway.

Already the Postal Service has begun sending out lowest-tier letter carriers to deliver groceries and Sunday packages for Amazon. Donahoe said he’s pleased with the results and we should expect more such programs.

Despite the union-led Staples boycott, which has AFL-CIO support, the controversial postal counters inside the retail chain are expanding to all 1,500 of its stores, and a contractor called Going Postal will do a similar business inside Walmart stores. These deals contract out post office work to low-wage retailers. In turn, the Postal Service has been driving business there by slashing hours and staffing at unionized post offices.

The unions want to expand services too—but “it’s nonsensical,” Letter Carriers President Frederic Rolando said, to dismantle the networks that provide what even management boasts is “the world’s most efficient postal service.”

If we lost door-to-door public service, who knows how much private carriers UPS and FedEx would charge you to carry a single letter to a rural address? You can bet it would be more than 49 cents.

In many urban markets the Postal Service will do seven-day package delivery through the holidays this year. “That’s a great idea,” says Mike Suchomel, a New Jersey mail processing clerk. “But then starting in January you’re going to say lower service standards, slow down the mail?”

Instead, the unions argue for maintaining the postal system we have, while boosting revenue by adding new services to its repertoire: check-cashing, notarizing, photocopying, shipping of wine and beer, and the big one, basic banking.

At least we can cheer Donahoe’s impending retirement, announced Friday. There’s certainly no love lost between him and the postal unions, which have been calling for his resignation. But his replacement, Chief Operating Officer Megan Brennan, is expected to pursue a similar course.

One reason Donahoe gave for stepping down now is that union bargaining begins in February. It’s a safe bet postal management will be coming after more concessions. Already new hires in the various crafts are channeled into permatemp positions with much lower pay and benefits than traditional career jobs.

For the fifth year in a row, Chief Financial Officer Joseph Corbett boasts, the Postal Service has “driven productivity to new heights,” even as it has reduced work hours, compensation, and benefits expenses. He said it saved money this year by using “the right mix of employees to bring the labor cost down to the lowest possible hourly rate”—meaning shifting more of the work onto lowest-tier workers. Next year, he said, “we will continue to ‘lean out’ our operations.”

Since the last contract, though, an anti-concession, activist slate toppled the incumbent leadership of the APWU. And the four unions, infamous for intramural bickering, buried the hatchet in March, announcing a new alliance to battle the attacks together. That included a pledge to “support maximum cooperation in the next round of contract negotiations.”

One chant in Kansas City on Friday went, “Get up, get down, postal workers run this town.” Among the ralliers were fast food workers active in the Stand Up KC campaign.

Since the mail plant is across the street from a Wendy’s, at one point protestors spontaneously marched across the street and into the restaurant. “Get up, get down, fast food workers run this town,” they chanted, and asked the workers behind the counter to join them.