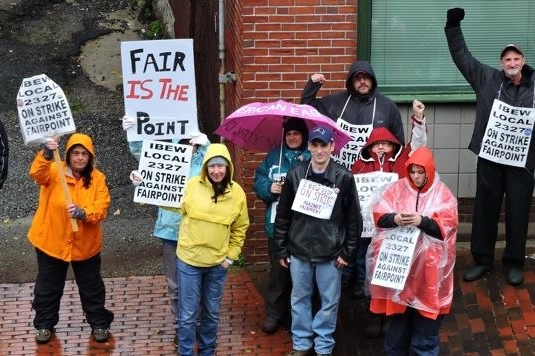 FairPoint workers are in day seven of a strike against their telecommunications employer.

The hedge funds that own the company are squeezing the workforce to make FairPoint more attractive to possible buyers, said union negotiators, who charge that the company has been negotiating in bad faith since April.

The striking workers build and repair home and commercial phone and data connections, and staff call centers. Most of the workers are IBEW members while 300 are members of the Communications Workers (CWA).

The unions agreed to work past the August 2 contract expiration, but on August 28th the company declared impasse. The unions insisted that they were not at impasse and continued to work while the company gradually imposed new terms. On October 17 the workforce walked out in an unfair labor practice (ULP) strike.

The new employment terms include a two-tier wage system that would pay little more than the minimum wage to the lower tier, the elimination of defined-benefit pensions for future hires, a freeze on contributions to existing pensions, and higher health care costs.

But the main issue in negotiations was job security. “Their imposition gives them the freedom to outsource everything and eliminate 800 jobs in Maine, not to mention 1,700 in New England,” said Jenn Nappi, assistant business manager for the IBEW Local 2327 in Maine. The outsourcing could go to out-of-state or foreign contractors.

To win the states’ approval of a FairPoint-Verizon deal in 2007, FairPoint promised to create at least 675 jobs in Maine, New Hampshire, and Vermont. But FairPoint has cut its workforce by almost 22 percent, outsourcing jobs in violation of its promises and its collective bargaining agreements.

In 2013, the unions won a legal battle over the use of outsourced workers to handle some of the company’s sales calls.

The unions have appealed to the Labor Board to reinstate the expired contract and order FairPoint back to the bargaining table. The charge, that the company illegally imposed its final proposals without the parties having reached impasse, is still being investigated by the Labor Board.

However, the unions warned on their website, “it can take the Board months or years to issue a decision on a ULP, workers must never depend on the legal process alone to win justice….That is why our mobilization efforts are absolutely essential to win this fight.”

In 2011, FairPoint emerged from bankruptcy, but in the process hedge funds and others purchased shares at a discount, securing a controlling stake in the company.

The hedge funds are pressing for cost-cutting measures, including lower wages and fewer benefits. The goal is to make the company more attractive for a sale or merger.

“The top five shareholders are hedge funds,” said Peter McLaughlin, the unions’ bargaining chair. “They’re not here to run a telephone business. They’re here to make money. If they can pretty this thing up and sell it, then they’ll try to do it.”

Over the years, this skilled workforce has maintained union conditions and family-wage jobs and benefits through tough bargaining, backed up by strikes. The two unions warned workers to be prepared for a potential strike three years ago, and have coordinated bargaining and contract campaigns.

This could be a long strike. The company has trained managers to be strikebreakers, and is using out-of-state scabs. In addition to picketing FairPoint offices and garages, union members are mobile picketing the scabs. Teams of strikers have been following scab trucks and picketing wherever the work is being done, including on telephone poles.

“This is a very scary time for us, but we’re in it for the long haul,” said Julie Dawkins of IBEW, Local 2320 in New Hampshire. The IBEW does not have a strike fund, so most workers aren’t getting strike pay. Health insurance runs out at the end of the month.

Across all three states, customers will be collateral damage as installations and repairs will suffer without skilled staff to provide the services. Charging that this is dangerous for rural populations whose emergency 911 calls could even be disrupted, unions are trying to bring pressure to bear on their state governments to demand that FairPoint provide essential telecommunications services by settling a fair contract.

In a hopeful sign, Vermont Governor Pete Shumlin said through a spokeswoman that he hopes the parties come back to table soon to work this out. “Meanwhile, he expects FairPoint to fulfill its commitments to maintain service and respond to its customers,” she said, “and has asked his Department of Public Service to monitor that situation closely.”

Labor and community supporters are showing their solidarity on the picket lines, bringing hot coffee and pizza and joining workers in the rain. In Vermont, members of the Vermont Workers Center have joined the lines, and in Maine, Teamsters and the Maine AFL-CIO have come out. An impressive number of dogs are walking the picket lines, leading to a Facebook page, Dogs for Fairness@Fairpoint.

FairPoint workers are fanning out across the region to talk about their struggle and mobilize other unions and public support. And yesterday they carried signs and banners into a cocktail party in Rockport, Maine attended by telecom industry groups including FairPoint.

Donate here to support the strike fund. Keep updated on the strike through the website Fairness@FairPoint and on Facebook at Fairness at FairPoint.

Related
In a Six-Day Strike, Bronx Produce Workers Doubled Their Raise and Inspired New York »
Communications Workers Fight Telecom Giant for MLK Day Off »
A Common Defense: Mobilizing Veterans in Labor to Beat Trump and the GOP »
How E-ZPass Workers on Staten Island Are Building Power During the Pandemic »
The Worker Mini-Revolts of the 21st Century »